The earthquake that Pierre Fouché knew would happen came on Jan. 12, 2010. The most intense shaking lasted less than a minute. But in that time, in cities near the epicenter, it seemed as if the entire world were collapsing.

Video: After the Quake 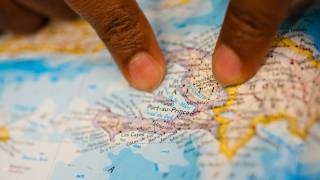 Haitian native Pierre Fouché is helping to rebuild his country. Hear his story, as told in his own words.

In Port-au-Prince, the capital of Haiti, the temblor shattered the National Palace, leaving the building contorted, its bone-white cupolas pitched at strange angles. Poorly constructed houses slipped down steep hillsides. Survivors, afraid to enter their homes, slept in the streets.

Fouché, a Haitian native, watched the nightmare unfold on CNN, following the news from his apartment in Buffalo.

A Fulbright scholar, he had come to UB in 2006 to study earthquake engineering. He had hoped to bring his expertise in seismic design back to Haiti in time to help prevent the kind of disaster that occurred on Jan. 12, 2010.

When the earthquake hit, he was about a year away from completing his PhD.

In a way, he had run out of time. His family survived, but government estimates of the death toll were terrifying: more than 300,000 lives lost.

Fouché forced himself to set dread aside and think about the future.

Fouché vowed to do what he could to make those new cities safe. His contributions would be humble—a small part in a massive reconstruction effort.

But he was determined to help.

As one of few Haitians with earthquake engineering training, he fielded media calls from across the U.S. to raise awareness about how substandard, unregulated construction had contributed to the scale of destruction. He talked to National Public Radio and ABC’s “20/20.” He penned a column for CNN describing how proper building codes could have saved lives.

On the ground, he worked with MCEER, UB’s Multidisciplinary Center for Earthquake Engineering Research, to deliver a series of professional development seminars in Port-au-Prince on how to design buildings to withstand earthquakes. More than 500 Haitian architects and engineers have attended.

To avoid falling behind on his dissertation, Fouché worked more. He slept less.

The reason, Fouché says: “I have discovered how wonderful it is to serve other people and to put what one knows to good use.”

“I don’t know if all students could have the same kind of opportunity that I have, but to the few who do, my advice is to welcome it,” he says. “Despite the inherent difficulties associated with that task, it is worthwhile. At the end you learn a lot about yourself while making a difference.”

The Jan. 12, 2010 earthquake killed hundreds of thousands of people in Haiti, leaving behind scenes of unthinkable destruction. More than a year later, the country is beginning, slowly, to rebuild.

Haiti, a Caribbean nation of French- and Creole-speakers, sits on a tangle of faults.

Large quakes leveled Port-au-Prince in 1751 and 1770, and Fouché grew up hearing stories about the country’s last major temblor, which took place in 1842 and destroyed Cap-Haïtien, his hometown on the north coast.

Still, memories fade, and by the time Fouché entered college, few fellow Haitians were thinking seriously about an earthquake.

But Fouché could not forget the accounts, passed down through generations, of the big one that wrecked Cap-Haïtien, burying townspeople in their homes. He also knew that the two quiet centuries that had passed since then made a repeat disaster more likely, not less. 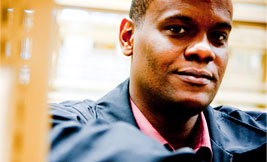 "As tragic as this event is, it is also an opportunity to start from scratch and rebuild the country in a planned and orderly fashion."

Outside of class, he toured construction sites around the city. What he saw made him uneasy. He noticed that support columns on some rising buildings were crooked. Often, workers placed steel reinforcement bars incorrectly.

“I started feeling that something was not OK,” he says. “When you go on-site and the construction practices are completely different from what you are learning, you have to ask yourself questions.”

Fouché recalls conversations he had with fellow students following the Indian Ocean quake and tsunami that killed more than 200,000 people in Asia.

They wondered how Haiti would fare against similar forces.

“We basically came to the same conclusion: If one of those fault lines becomes active at any point in time, the consequences would be catastrophic, especially in the shanty towns,” Fouché remembers.

Five years later, the house where he and his friends had carried on those discussions collapsed in the earthquake that they had feared would come.

Earthquake engineering, which boasts good job prospects, was a practical career choice for Fouché. In a nation where many people survive on less than $2 a day, his parents—a lawyer and a full-time mother—stressed education as the gateway to gainful employment for each of their 10 children.

MCEER’s world-renowned faculty and laboratories drew Fouché to UB, where his studies were funded by a Fulbright Scholarship, a UB Presidential Fellowship and a School of Engineering and Applied Sciences Dean’s Scholarship.

Fouché, 33, had always aspired to apply his training to real-world problems.

Sadly, the opportunity to do so arrived under dire circumstances.

Unsure how to respond, Fouché, a reserved man with a simple style, sought guidance from his doctoral advisor, Michel Bruneau, a fellow francophone from Québec City, another quake-prone locale.

“I told him that by virtue of his training, he was in a unique position to help his country by providing valuable technical information,” remembers Bruneau, a professor of civil, structural and environmental engineering. “I said that as long as his interventions remained within his field of expertise, all he could do is be useful.”

By speaking out, he hoped to draw attention to Haiti’s humanitarian crisis. He also knew that many foreigners perceived Haiti as corrupt and unstable, and he wanted to show the world that there were Haitian citizens seeking education in subjects critical to the country.

As Fouché fielded news inquiries, Filiatrault, MCEER’s director and a native of Québec, assembled a team of French-speaking experts that headed to Haiti at the request of the United Nations to conduct safety inspections on standing facilities, including hospitals. (Visa restrictions forced Fouché to stay behind.)

Across UB, students and faculty members rallied behind Haiti, contributing to relief efforts through projects that ranged from fundraising and mapping damage to treating victims aboard a hospital ship off the Haitian coast.

“It was a motivation for me,” he says. “If other people who are not even from the country were so eager to help, as a native of the country my responsibility was to do even more.”

“The situation in Haiti has put him immediately in that crisis mode of operation that we all learn to operate in. That additional training while unforeseen, is valuable.”

—Michel Bruneau, Pierre Fouché's advisor, on how Fouché's work in Haiti will prepare him for life as a professional earthquake engineer

Fouché returned to Haiti in May 2010 to help teach a professional development seminar at UniQ, his alma mater. In temperatures nearing 100 degrees Fahrenheit, the classes were taking place in tents—the only facilities that the campus, which the January disaster had leveled, could offer.

Despite the conditions, 215 engineers showed up to learn.

He believes that for Haiti to recover, Haitians need to acquire skills to rebuild independently.

The May seminar, taught in French, was the first in a series that UniQ and UB are partnering to deliver. Each session provides credit toward a master’s degree in earthquake engineering that MCEER is helping UniQ to create.

Classes have covered topics including the seismic design of concrete, wood and confined masonry buildings. Already, some attendees have begun insisting that their firms adhere to newly learned earthquake engineering principles.

Filiatrault, a professor of civil, structural and environmental engineering, says that Fouché, who made the initial contact with UniQ and helped develop the UniQ-UB/MCEER education program, is a source of inspiration.

“Pierre’s determination in rebuilding his home country after the devastating Jan. 12 2010 earthquake is a big component as to why everybody’s so involved,” Filiatrault says.

“Pierre now has a unique opportunity to make a difference, and that's been the goal all along. ... Most of the people who died, they didn't die because of the earthquake. They died because of the lousy construction we had.”

—Frantz Telfort, A close friend and college roommate of Pierre Fouché.
The two grew up in Cap-Haïtien, on Haiti's northern coast.

During Fouché’s first trip home after the earthquake, he toured Port-au-Prince. The Sacré Coeur, a local church, had partly collapsed, its broken frame sunken into a pile of rubble, as if the building were kneeling. Movie theaters and restaurants Fouché used to visit had turned to dust.

“Part of my past was literally wiped out—that was the type of feeling that I had at the time, since those places that are now gone had memories dear to me attached to them,” he says.

Who lived and died was a matter of luck.

A friend of Fouché’s recounted her escape from a multi-story building: She was on the top floor when the levels below “pancaked,” falling into one another until she was close enough to the ground to exit, unhurt, with her newborn daughter. One of Fouché’s sisters happened to be out of the house, visiting a brother, when her home collapsed.

Standing before the topography of devastation, walking down once-familiar streets that he no longer knew, Fouché thought back to his time as a student in Port-au-Prince.

In those days, when he observed poor workmanship on construction sites, he felt powerless to intervene.

Now, just a few years later, he finds himself in a different place.

Haiti’s Ministry of Public Works, Transport and Communication, supported by the United Nations Office for Project Services, sent 58 engineers to the latest earthquake engineering seminar at UniQ this March.

People are listening to what Fouché has to say.

He is scheduled to defend his dissertation—on bridge piers made to withstand earthquakes and explosions—as early as December.

Whatever he does next, he knows he wants to be a part of rebuilding the cities rising from the ruins of the quake.

But Fouché hopes that future generations will also be able to look back on it as a turning point—as the day that things began to change.

Pierre Fouché hoped to prevent the kind of disaster that devastated Haiti in January 2010.

Now, as one of the country's only earthquake engineers, he is helping to rebuild what was lost. Hear his story, as told in his own words.

In 2005, an MCEER team traveled to the Gulf Coast to examine structures destroyed and weakened by Hurricane Katrina, along with hospitals’ evacuation procedures and decision-making.

Plans for the site include a geohazards experiment station that will simulate pyroclastic flows and volcanic plumes like the one that halted European air travel in spring 2010.

MCEER’s work is a major component of UB’s strategic strength in Extreme Events: Mitigation and Response, one of eight areas of inquiry the university is emphasizing under its UB 2020 long-range plan.

Other groups that focus on extreme events include the Center for Geohazard Studies, which seeks to minimize destruction from volcanic eruptions, landslides, mudflows and avalanches, and the Witebsky Center for Microbial Pathogenesis and Immunology, which is recognized internationally for developing vaccines.

Lawrence Bone, chair of UB’s orthopaedics department and a trauma surgeon at Erie County Medical Center, treated victims aboard a hospital ship off the Haitian coast.

Pierre Fouché and MCEER in the News