Phillips Stevens, associate professor of anthropology at the University at Buffalo, discusses the role of the bat in popular culture. Happy Halloween! And a special thanks to The Buffalo Museum of Science collection for access to the bat featured in the video.

Bats are creatures of the night, designed by nature as nocturnal and, in many ways, defined by humanity through their association with the darkness, according to Phillips Stevens, associate professor of anthropology at the University at Buffalo.

Stevens says human culture tends to be wary, if not fearful of the night. Darkness, for early human culture, was an obstacle. The setting sun took with it the day’s warmth and diminished the human sense of sight. The night was inhospitable and the environment was hard to see. Darkness meant danger, and many cultures believed the end of their day was the beginning of their vulnerability.

But the night inspired as much respect as it did fear and the bat’s supernatural reputation developed because, unlike people, it was comfortable with the night.

“Bats get along fine at night. They have no problem navigating,” says Stevens. “That ability is impressive to people all over the world.”

Bats, in fact, became active at the same time of day that humans became anxious. Humans took shelter at night, while bats moved fluently around the limitations and threats created by darkness. The human eye couldn’t contribute to an explanation of the bat’s nighttime abilities, but the human imagination filled in the gap with its own vision.

“All cultures have classes of dangerous nocturnal creatures, whether witches, goblins or ghosts, supernatural creatures which are active at night,” says Stevens. “Bats are like that.” 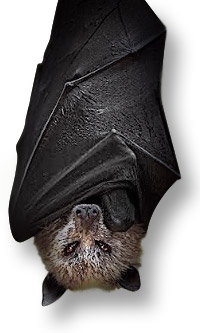 To the Bat Tower!

A University at Buffalo architect is working to raise awareness for a disease that has killed more than 1 million bats.  Joy Hwang’s unique 12-foot Bat Tower in Griffis Sculpture Park is designed to draw attention to the affliction known as white-nose syndrome.  Hwang calls the disease that attacks hibernating bats an ecological crisis. “Bats are a critical part of the ecosystem and now they are facing this threat.

Because of the bat’s absolute comfort at night, they have become part of that nocturnal fellowship of animals with a presence in the supernatural, according to Stevens.

“The witch is our favorite Halloween character,” says Stevens. “It’s is not a universal character, but where there are witches, there is also a belief that they have the power to transform themselves into some animal.”

Stevens says the animal that shares the witch’s power is usually nocturnal and sinister. In the grasslands of Africa, it’s the hyena, a carrion eater with a menacing laugh and angry canine face. In Europe, it’s the black cat, with its empty, glass-like eyes and its graceful movement, unburdened by night.  Bats fill the same role in many cultures. In bats, says Stevens, the witch has an animal that can go out at night and fly in her place.

“The witch stays home while the bat goes out into the night with her power, accomplishing her deeds,” says Stevens. “It’s the perfect alibi.”

The transformative power of the witch is also realized by the vampire, a character who ever since Dracula has been able to turn into a bat. Stevens says Bram Stoker is responsible for modern folklore about the vampire, taking a timeless idea and creating Dracula.

“The vampire is the very first supernatural association with bats,” says Stevens. “Witches are also vampires, taking the life force from victims.  This belief is associated with long wasting diseases, such as certain cancers.”

Even the idea of becoming a vampire after a bite is not a universal belief.

Dittmar adds that despite superstition and folklore there is no reason to fear bats. In fact, gratitude would be appropriate. Bats are an important part of the ecosystem, with major roles as predators of insects and agricultural pests. They disperse seeds and pollinate plants. They’re also unique. Bats are the only mammal capable of sustained flight. They are nimble aerialists, capable of impressive maneuvers, Dittmar says.

“I guess it depends on who you talk to,” says Dittmar, “but I rarely encounter people who are afraid of bats.”

Although possible, it’s also unlikely that the bat Seward mentioned was in London. Bats are found all over the world, with the exception of the poles. True vampire bats, however, are found only in the Americas, according to Dittmar.

“There are 3 species; the most common is Desmodus rotundus or the common vampire bat. The others are Diphylla ecaudata or the hairy-legged vampire bat and Diaemus youngi known as the white-winged vampire bat,” Dittmar says. “They all occur in South and Central America, but Desmodus and Diaemus reach into the southern part of North America, including Mexico and Southern Tier of the US.”

To his credit, Stoker did know something of the vampire bat’s habitat, attributing the bat’s European presence in his novel to “…some sailor [who] may have brought one home, and it managed to escape, or even from the Zoological Gardens a young one may have got loose, or one be bred there from a vampire.”

The vampire bat, meantime, can attribute its name to human legend.

“The vampire bat was named for the creature of folklore, not vice versa,” says Stevens.

“That’s true,” adds Dittmar.  “But they named the wrong bat. There is a bat called Vampyressa.  The name literally alludes to the vampire bat, but it is not a blood feeder at all.  People get confused with that all the time.”

University at Buffalo biologist Katharina Dittmar de la Cruz studies parasites of bats to learn more about their evolution and how they might transmit disease.  The parasites, bat flies, live in the fur of bats and subsist on their hosts’ blood.  “They are like little vampires,” says Dittmar.  Her approach to studying these parasites may be among the most comprehensive in the world.

Support the College of Arts and Sciences

Support the University at Buffalo’s College of Arts and Sciences by visiting the Giving to UB page and making a gift to the area of your choice.