Give Him His Props

IN THE 10 YEARS SINCE he graduated from UB, Jonathan Shimon (BFA ’07) has, among other things, built the electrical and mechanical components of an animatronic monkey music box for the “Phantom of the Opera” national tour, created a Cadillac out of a golf cart and foam for Sally Struthers’ character in “All Shook Up” at Artpark, and designed the control system on LED-emblazoned Elvis costumes for the Broadway production of “Honeymoon in Vegas.”

Technical theater, also called theater technology, includes everything that goes into staging a production: lighting and sound design, costumes and makeup, scenery and props. As a technical director (or TD), Shimon plays an essential if largely unseen role in making all of that possible: He programs scenic automation (when stages, scenery and props are moved via computer); works rigging (the ropes, pulleys and devices that control curtains, scenery, etc.); designs lighting control boards; sets schedules and budgets; and implements safety procedures. Katherine Metzler, a UB student currently earning a dual degree in technical theater and mechanical engineering, sums up the profession best: “A TD’s job is to make the set designer’s dream come true.”

As an authority on nearly every aspect of technical theater, and as one of about 1,000 certified riggers in North America, Shimon is often called upon to share his expertise. This past summer, he traveled more than 30,000 miles to train theater technicians on cruise ships from the Baltic Sea in northern Europe to the Strait of Malacca off Malaysia. But since 2014, when Shimon came back to UB as an assistant professor in the Department of Theatre & Dance, those benefitting most from his wealth of knowledge have been UB students like Metzler.

"Lumagination” at the Buffalo and Erie County Botanical Gardens.

FOLIAGE FX Shimon is the technical supervisor for UB’s displays at “Lumagination,” an annual sound-and-light show at the Buffalo and Erie County Botanical Gardens. For the 2016 show, pictured here, students created effects inspired by the diurnal cycle of light in a rainforest. Photo: Douglas Levere

LIGHTING THE WAY Shimon indicates the structure in the Botanical Gardens’ dome where students will hang lighting. Photo: Douglas Levere

Shimon’s interest in theater was sparked in seventh grade when his shop teacher noticed his proficiency with power tools and asked if he wanted to build scenery after school. He enjoyed it and continued to work on stage crew throughout high school. But he found his calling at UB. “I took Introduction to Technical Theatre—a class I now teach—and quickly decided I was going to be a technical theater major.” He worked at concerts, football games and other live events at the university, as well as at venues around Buffalo, including Darien Lake amusement park, the Erie County Fair, the Kavinoky Theatre and more—all before the age of 21.

“I had a lot of really amazing experiences that couldn’t have happened at any other institution,” Shimon says. “When I was 19, I production managed Spring Fest.” Specifically, he worked with Snoop Dogg’s tour manager and chose the rigging, staging, lighting and sound equipment for the concert. “The list of responsibilities I had was staggering,” he laughs, crediting the mentorship provided by UB faculty and staff for his ability to take on so much. 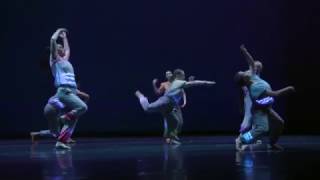 A rehearsal for “Undertow” by UB’s Zodiaque Dance Company

Many of those same teachers are now Shimon’s colleagues, and Shimon is himself a mentor, teaching the Introduction to Technical Theatre course each semester as well as a variety of studios and special topics classes. His mission, as he puts it, is to impart to students how technology helps tell the story—and not just to theater students. A typical Shimon course attracts as many students from computer science and engineering as from theater and dance. Indeed, more than half the undergraduates in his intro course are non-majors.

In one of his recent special topics courses, an LED-costuming project that he co-taught with costume designer and Morris Visiting Artist Jen Dasher (who collaborated with Shimon on the Elvis outfits for “Honeymoon”), students designed attire with tiny, twinkling lights for UB’s Zodiaque Dance Company. The lighting inspired Anne Burnidge, associate professor of dance, to develop a routine that mimicked underwater bioluminescent creatures (see video at right). “The LED project was my favorite,” says Metzler. “We worked on it from concept to realizing it on stage.”

STAGE LIGHTS LED costumes—like these light-up Elvis jumpsuits he helped create for “Honeymoon in Vegas” on Broadway—are a Shimon specialty. His other areas of focus include scenic automation and theater safety. Photo: Joan Marcus, Photo courtesy of Lighting & Sound America

FOAM ROLLER In collaboration with a local supplier, Shimon’s team modeled and assembled this foam Cadillac to be “driven” by Sally Struthers’ character in a production of “All Shook Up” at Artpark. Photo: Lynne Koscielniak

To say that technical theater courses are hands-on is an understatement. In Shimon’s courses, students build scenery, draw wiring diagrams, use AutoCAD software, hang lights and operate rigging. In fact, each departmental production at UB is student-designed, and students fill all major technical roles, running entire shows from start to finish. “UB is in a distinct minority—in terms of theater and dance programs in the U.S.—where students are the TDs on university productions,” Shimon says.

According to Metzler, Shimon is the one who made that happen. “It used to be that just the faculty would do the TD jobs, like budgeting and drafting,” she says, adding that Shimon still guides them and answers questions. “But he really puts it all in our hands.”

Shimon also involves a few of his top undergrads in his professional work outside UB. For example, every summer and fall, students participate in the technical aspects of the Neglia Ballet Artists’ production of “The Nutcracker” at Shea’s Performing Arts Center, which Shimon has been TDing for the past eight seasons. Last summer, Metzler handled the budgeting and structural design for the show every other week, when Shimon was out of town training cruise ship staff. 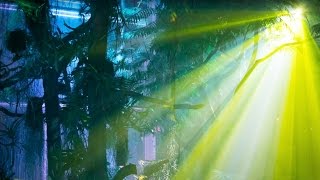 Alex Farley, a senior earning his BFA in theater with a design and technology concentration, helped with a warehouse move, rebuilt scenery at the Shea’s workshop and assisted with load-in and load-out for the production. This was his third time working on “The Nutcracker,” which starts its run the weekend following Thanksgiving. “You get to work at Shea’s, have off on Thanksgiving to eat your turkey, and go back to do the show,” he says. “It’s a fun week.” Shimon was also Farley’s mentor on this year’s production of “American Idiot” at UB, for which Farley was the student TD. “It’s very evident that [Shimon] cares about producing good students, as well as the future of our industry,” Farley says.

The field does in fact need new blood. Shimon mentions that there’s a dearth of riggers, technical directors and automation experts, and that the industry is constantly searching for engineering and computer majors “who know stage left from state right.” His goal? To instill a love of theater in these students, teaching them how to pull off incredible feats of imagination and engineering—and to ensure that the show goes on.