Michael Jablonski (right) as Riff in a 2015 production of “West Side Story.” Photo courtesy of Riverside Theatre, Vero Beach, Fla. 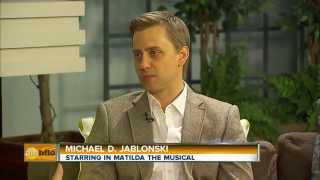 Jablonski being interviewed on ABC7 while in Buffalo for the national tour of Matilda the Musical.

“Once you’re known in the business as being good at swinging or dance captaining, everyone wants you. It’s hard to find people who can handle it.”
Michael Jablonski

Indeed. In the 20 years since landing his first touring production as a dancer in “Brigadoon”—which he did just one year after graduation—Jablonski has attached 70 performance credits to his name, including three Broadway shows and eight national tours. Among his favorites: “West Side Story,” “The Book of Mormon” and “The Best Little Whorehouse in Texas” starring ’60s icon Ann-Margret.

Jablonski’s love of dance started early. “My parents are huge musical theater fans, so growing up [in the Buffalo suburb of West Seneca], we went to shows at Shea’s and in Toronto,” he recalls. He took his first dance class in seventh grade, but when friends made fun of him, he quit and didn’t take another dance class until his sophomore year at UB.

He still sang and acted a bit in high school, and in his senior year auditioned for Spirit of Youth, a local show choir. There, he met Lynne Kurdziel Formato (MA ’87, BA ’85), former director of the Music Theatre Program at UB. Recognizing Jablonski’s talent, Formato encouraged him to attend the university.

Jablonski took Formato’s advice but didn’t start off as a theater major; endowed with a natural proclivity for numbers, he initially majored in math. Yet performing was still in his blood. He took an acting class elective and auditioned for “The Threepenny Opera,” the first production to open at the then-new Center for the Arts. The next year, he landed a part in “Godspell.”

“‘Godspell’ changed my life,” he says. “I told Lynne, ‘This is what I want to do.’” After Formato talked it out with Jablonski’s father, who had some concerns about career prospects, Jablonski changed his major to theater.

Post-graduation, Jablonski danced on cruise ships, for regional theaters and at Busch Gardens in Williamsburg, Va. Then came “Brigadoon” and a move to New York City. There, in part because of his even temperament and “mathematical brain” (which allows him to remember the thousands of steps in a single show), he was soon tapped for two highly specialized roles: swing and dance captain.

A swing is able to substitute for multiple performers on a given show. A dance captain ensures continuity of all choreography throughout a show’s run and teaches the choreography to replacement dancers. Both positions can take a toll, says Jablonski. Swing can be emotionally draining: You have to be ready to jump in for any number of positions at a moment’s notice. As dance captain, you’re critiquing your peers, which must be handled delicately. But Jablonski is a master of both roles and has performed them countless times. “Once you’re known in the business as being good at swinging or dance captaining, everyone wants you,” he says. “It’s hard to find people who can handle it.”

In 2001, Jablonski began teaching master dance classes at universities in cities where he was on tour. Then, in 2016, while working as dance captain on the touring production of “Matilda the Musical,” he had an epiphany: He loved the instructional aspect of dance captaining a show. He loved teaching more than any role onstage. And once again, his mentor gave him the boost he needed.

Formato, now an associate professor at Elon University in North Carolina, brought Jablonski on staff this past fall as an adjunct dance instructor. While there, Jablonski applied to graduate schools, including UB, with the ultimate goal of finding a full-time university position.

Many students in the arts never finish school, instead choosing to try their luck at landing a dream job. One of Jablonski’s motivations for teaching is to convince undergrads to stay the course. “There are so many benefits to getting your degree,” he says. “I know it’s tempting to take that job, but that job is going to end. Every show closes.” With his proposed move from the dance world into academic life, it’s clear the curtain has yet to fall on Jablonski’s career.