The office of Jean Kopperud, professor of music 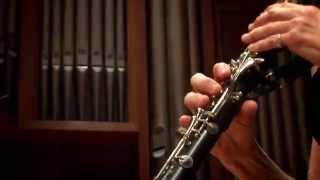 Clarinetist Jean Kopperud’s office provides a spatial narrative of her wide-ranging passions. Foremost among these is the clarinet, one of which appears in almost every photograph in the room. Her photos also document an early-career move from seated concert musician to kinetic performer. Next, there are her beloved horses and dogs. And, of course, there’s the color. “Blue is my favorite color,” she says. “When I came into this office, it was all institution-beige.”

I’m a dressage competition rider. That horse was named Baku, which is a Japanese name for a creature that eats nightmares. Perfect for a black horse. I sold him because we had a really bad accident, and it was his fault. I ended up in the trauma ward for 11 days. He’s a beautiful horse, but we were not a match.

Because I was a marathon runner, I was hired to do a 45-minute dance piece for clarinet. For six months I went into heavy-duty dance training, weightlifting, more running. That piece really changed my life. It created a career for me that I think was more suited to who I am.

Jean Kopperud skydiving with a Clarinet.

This was for a one-woman show I produced. I’d been a skydiver already, and the director, Tom O’Horgan, who did “Jesus Christ Superstar” on Broadway, noticed these photos of me flying through the air. He looked at me and said, “Do you think you could jump out of an airplane with a clarinet?”

D - As Pan in “A Celebration of Twelfth Night”

A conductor and writer from the annual “A Celebration of Twelfth Night” in Westerly, R.I., saw me in “Harlekin” and asked me to perform a leading role as Pan: half-goat, half-god. I worked with clowns and jesters. There was a 200-piece chorus and a pit band. I worked with that company for 22 years.

I found the clarinet in a store in South Dakota. Eventually, someone offered to make a lamp out of it. It’s very old. Our clarinets today have many more keys.

I teach all my students to juggle. The process of juggling changes your brain waves, smoothes them out. I do it before every concert and before I compete on horseback. It helps with writer’s block, makes it a little bit easier to work.

The mirror develops awareness. Whether I’m working or my students are working, it’s helpful to be able to say, “This is what I’m seeing,” in terms of posture and embouchure.