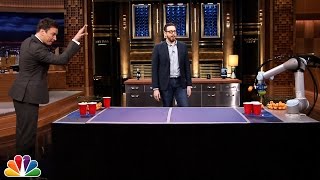 Despite their humanity-threatening roles in sci-fi movies, robots these days tend to perform pretty banal tasks. So if you work in industrial robotics—as does John Amend (BS ’08), co-founder and CTO of Empire Robotics in Boston—it can be tricky to make your product stand out. That’s when it helps to have a robot that plays beer pong.

The Versaball, Empire Robotics’ core product, is a balloon filled with granular material, which can be made harder or softer by adjusting the air pressure inside. Featured on the cover of the November 2015 issue of Popular Mechanics (it won one of the magazine’s Breakthrough Awards), the Versaball can grasp items many other industrial grabbers can’t. Consequently, it’s been adopted by several manufacturers to pick up and place objects on assembly lines.

But as Amend found out, when attached to a robotic arm, the Versaball also can be programmed to shoot an object through the air—such as, say, a pingpong ball. The Versaball bot beat a professional beer pong player (yes, that’s a real occupation) at the Consumer Electronics Show in Las Vegas last year, then took on Jimmy Fallon on “The Tonight Show.”

Amend already had some experience making robots do unusual things. As a member of the UB Robotics Club, he took part in Bot Wars, in which two robots do their best to destroy each other, and Firefighter Bot, where students program robots to navigate a maze and blow out a candle at the center.

But his focus now is on the serious stuff. “The goal isn’t to play beer pong for the rest of our lives. It’s to do industrial manufacturing work.” Amend and his team are currently working to develop hybrid grippers that will use suction and mechanical pinchers to grip an even wider range of objects and materials.

In the meantime, we can all rest easy knowing we’ll be able to party with our future robot overlords.

Tell us your stories, young alumni!

Are you a UB grad age 30 or under? Have a compelling story or accomplishment to share? Send a brief email to At Buffalo.