The Voice of Life

After a hiatus of several years, the South Campus bells peal again 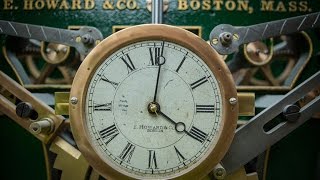 Share This Print
“Just as the famous clock tower is in many ways the symbolic face of our university, its chimes have been UB’s voice for decades. ”
President Satish Tripathi

The Westminster chimes of the South Campus clock tower went silent in 2011 as the university began an extensive renovation of Edmund B. Hayes Hall, the iconic 19th-century building that houses the clock.

With Hayes’ construction nearing completion (it is scheduled to open this fall), the chimes were restarted last October, and now sound every quarter hour once again. Originally set in motion on July 19, 1928, each of the four bronze bells weighs between 400 and 1,800 pounds, and carries an inscription befitting its presence at a place of learning. The smallest bell bears the words of Cuthbert W. Pound, former chief judge of the New York State Court of Appeals: “I am the voice of life; I call you: Come and learn.”

At the heart of the clock is its historically preserved movement—a hulking mass of gears, weights and levers forming the mechanism that keeps time and triggers the chimes. In early October, a team of horologists, or clock doctors, took several days to carefully dust, oil, paint and repair UB’s version of Big Ben.

The return of the chimes marks a new beginning for UB’s oldest campus. The $43.8 million restoration of Hayes Hall, home to the School of Architecture and Planning, will be followed by the relocation of the School of Social Work and the Graduate School of Education to the South Campus.

At the official reopening of the clock tower on Oct. 15, President Satish K. Tripathi succinctly captured the poetry of the moment: “Just as the famous clock tower is in many ways the symbolic face of our university, its chimes have been UB’s voice for decades.”