How to Become a Classical Music Listener 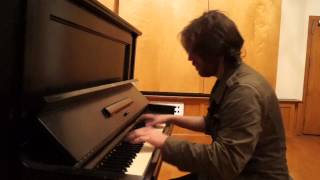 “Everybody loves classical music,” says Richie English. “Some just haven’t met it yet.” English, a pianist and composer, met classical music early. At 6 years old, after hearing his mother play Beethoven’s “Für Elise,” he sat next to her on the piano bench and played a bastardized version of it. “I could see the music,” he says.

Since then, he has achieved other impressive musical feats, from teaching piano lessons at the age of 10 at Denton, Cottier & Daniels (a historic WNY piano dealer) to performing for the Dalai Lama while an undergraduate at UB, to orchestrating pieces for everyone from Michael Franti to Denny Laine of the Moody Blues.

Indeed, English works with numerous popular artists as an in-house composer for GCR Audio (a recording studio complex in Buffalo founded by the Goo Goo Dolls’ Robby Takac) and is no stranger to the Billboard Top 10. But his real love is classical music, which he nurtures on his WNED-FM show “Classics by Request” and as a host of the station’s “Evening Classics.” When he’s spinning tunes from bygone centuries, he says, “I share with listeners the works that have transformed—and continue to transform—my life. For four hours I’m lost in Wagner or Chopin, and it just strengthens what’s already in my genetic coding.”

We asked English how someone who’s never met classical music can get to know it.

How to become a classical music listener:

Listen actively
Set aside time to really listen to the performances. No cellphone, no distractions.

Composers are people too
The men who wrote this music weren’t just historical figures in wigs and stockings, but real human beings with real human flaws. For example, Johannes Brahms was in love with Clara Schumann, the wife of his hero, Robert Schumann. It’s believed that he never consummated this love, but he did compose several works in her honor. You can really connect to the emotions embedded in those notes.

Hear the story
Every piece, whether two hours or 10 minutes long, is a dramatic unfolding of a life, event or era. Follow the narrative as it unfolds. Experience the adventures of the characters—meaning melodies or themes—as they undergo transformative events.

Start with Wagner
You can absolutely hear his “leitmotifs” (German for “leading motive”)—short musical fragments that represent characters or settings and help convey the story. Think of Wagner’s leitmotif as an early version of a film score: It lets us know how to feel and when.

Here are a few pieces English recommends to all listeners (with commentary):