How to Pick a Winner at the Track 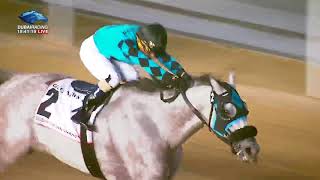 The 2018 Dubai Golden Shaheen, won for the second straight year by Mind Your Biscuits, co-owned by UB alumnus Dan Summers.

Dan Summers knows a thing or two about picking horses: Mind Your Biscuits, a thoroughbred his family bought in 2014 for a mere $30,000 (racehorses often sell for seven figures), took home the grand prize of $1.2 million in the Dubai Golden Shaheen race at both the 2017 and 2018 Dubai World Cup. “To have a horse that’s good enough to compete there—and then to win against the best sprinting horses in the world—was really amazing,” he says. The 2018 victory boosted Mind Your Biscuits' career earnings to $3.7 million, a record for a New York-bred thoroughbred.

Born into a horse-loving family (his brother, Chad, is Mind Your Biscuits’ trainer), Summers, 28, grew up going to the races. In 2010, while a student at UB’s School of Management, he placed a cold call to the New York Racing Association (NYRA). He was hired as parking supervisor the same month he graduated and moved quickly up the ranks to become operations analyst, then facilities/ operations manager. In this position, which he has held for the past five years, he supervises the administrative planning, financial management and daily operations at New York’s three major tracks: Aqueduct Racetrack, Belmont Park and Saratoga Race Course.

Summers admits he was worried about taking a job in the business. “Horse racing is my No. 1 hobby,” he says. “I thought that if I was around it for 40-plus hours a week, I’d lose my love of the sport.” On the contrary, he says, “my love of racing grew even more.”

We asked Summers to provide a few pointers on how to choose the next Mind Your Biscuits.

How to pick a winner at the track:

By the numbers
Learn to read the Daily Racing Form. It provides everything you need to know about a horse and its past 10 races, including distance of race, running and finishing positions, and what’s known as its speed figure, which is the easiest way to differentiate between two horses. You can also compare info on jockeys, trainers and owners. For example, if two horses are equally talented, I choose the more successful jockey.

Going the distance
A horse might be running at a different distance than he’s used to. They all have preferred distances they like to run, and just one-eighth of a mile can make a difference. This is an overlooked angle in racing.

Check that pedigree
There are only a handful of good sires producing good offspring each year. Do a little research on who the sire and dam are—that will also tell you if a horse runs better on turf or can race a longer distance. Usually these things run in the family.

Believe your gut
Sometimes beginner’s luck pays off, so just pick a horse you think looks good. And keep in mind that a happy horse—one that’s prancing and has its head held up proudly—always runs better!