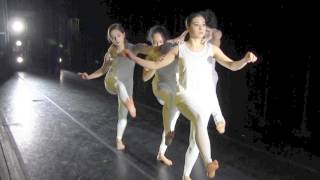 While disciplines are typically kept separate in schools, in dorms they often collide. A friendship formed in Governors Hall brought about an unusual fusion of art and science: a modern dance performance celebrating the 2017 centennial of NASA’s Langley Research Center.

To Amy VanKirk (BA ’05, BFA ’05), who choreographed the work with the encouragement of her former UB suitemate Ann Martin (BA ’05, BS ’05)—a NASA staffer at the time— the conjunction seemed natural.

“I’ve always had an interest in astronomy, and Ann and I would talk about how I should do a dance for NASA,” says VanKirk. When the 100th anniversary of the facility known as NASA’s “mother center” was approaching, Martin seized the opportunity.

“They were planning a big tribute event with different arts performances,” says Martin. “So I introduced Amy to the people who were organizing it.” The resulting piece—an interpretive work titled “Remember the Future”—evoked NASA’s scientific endeavors as well as the human perspectives of those who work there. As part of the development process, VanKirk interviewed employees from NASA’s various divisions.

“All people think of with NASA is space, but they do a lot more. Ann helped to make sure I covered everything,” says VanKirk. Martin, then a project evaluator for the education and outreach team charged with “telling the stories of NASA,” notes that there are people working in every discipline at NASA, and there are connections between every one of them.

That boundary-blurring orientation is characteristic of both pals. Martin was an English and physics major at UB, and VanKirk, a dance and psychology major. They met on Martin’s first day on campus, became quick friends and then suitemates, and continued to stay in touch post-graduation. By happenstance, the two ended up in Virginia, although at opposite ends of the state. “We’re five hours away, but it’s a lot closer than I am to my other close friends or family,” says VanKirk. “Ann is like my family here. I’ve gone to her house for Thanksgiving five years in a row.”

Martin, who recently left NASA for a role with Oak Ridge Associated Universities, reports that all of their Governors suitemates have remained close. In fact, when a sneak peek of the NASA composition was set to take place at Radford University, where VanKirk is an assistant professor of dance, Martin hatched a secret plan with VanKirk’s former roommate, Samantha DeMart (BA’05), for a mini-reunion. “We made her cry!” Martin says. “It was awesome.”

Tell us your Blue Bond story.

Did you start a lifelong relationship at UB? Email a brief account to bluebond@buffalo.edu.