Should We Be Scared of Supervolcanoes?

An eruption could wipe out a country and alter global weather. But don't panic just yet

Watch “A Day in Pompeii”: 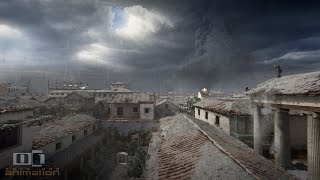 Earthquakes rattle the ground while cannon-like explosions shoot burning rock and ash into the air at speeds upwards of 600 miles per hour. The burning rocks crash to the earth, setting the grass and trees ablaze, while the ash rises 100,000 feet into the sky, blocking out the sun.

Once the darkness sets in, all that is heard is a rumble. Like a sandstorm, a cloud of scorching gas and rock sweeps across the ground. Temperatures inside the storm reach up to 2,000 degrees. Everything in its path is incinerated. Carried by the wind, high-altitude ash spreads across the country before falling like snow to coat the land.

No, this isn’t the opening scene of a new Michael Bay movie. It’s a description, courtesy of UB volcanologist Greg Valentine, of what likely occurred during a prehistoric eruption of Yellowstone Caldera, the supervolcano that lies beneath Yellowstone National Park.

The destruction caused by the eruption of Mount St. Helens in 1980 (57 deaths and $1 billion in damages) pales in comparison to what would ensue if a supervolcano erupted today. These behemoths have the power to spew more than 250 cubic miles of ash, magma and rock. Indeed, a supervolcano could launch the planet into a new ice age.

What’s more, there are many potentially active supervolcanoes across the Earth’s surface, from Bolivia to New Zealand, including three in the United States alone: Long Valley Caldera in California, Valles Caldera in New Mexico and Wyoming’s Yellowstone Caldera.

Now for the good news: The last supervolcano eruption was more than 76,000 years ago. The most recent Yellowstone Caldera eruption—it has blown its top three times—was the roughly 630,000-year-old explosion that formed Lava Creek Tuff (see graphic below). “The bigger the eruption, the less frequent it is,” says Valentine, who also leads the UB Center for Geohazards Studies. “People have heard about supervolcanoes because of things like the Discovery Channel, but such an eruption hasn’t actually happened in human memory.”

When most people picture a volcano, they imagine a large, lava-spewing hill, like the kind found throughout the Hawaiian Islands. Known as shield volcanoes, these can reach heights of more than 30,000 feet above the sea floor, but are not particularly explosive.

Smaller in size, but much more explosive than shield volcanoes, are stratovolcanoes. These cone-shaped mountains rarely reach higher than 8,000 feet, but what they lack in size, they make up for with power.

In contrast to their tamer cousin, stratovolcanoes erupt wildly, hurling molten rock in all directions and billowing clouds of ash into the air. They also spew lava, but it tends to spread slowly, like toothpaste being squeezed from a tube. Their preferred tool of destruction is a dense cloud of hot gas and rock known as a pyroclastic flow. The pyroclastic flows of Mount Vesuvius in A.D. 79 were responsible for the destruction of the ancient Roman cities of Pompeii and Herculaneum.

Moreover, supervolcano eruptions can last for days. As such, they’re capable of spreading ash 1,000 miles from the site of the explosion and demolishing all life within 100 miles with pyroclastic flows that travel between 5 to 70 miles per hour.

By now you’re probably wondering why you’ve never seen a supervolcano. Shouldn’t they be rising up like giant beasts over the horizon? Well, no, because they don’t rise up at all. Supervolcanoes are actually calderas, or bowl-shaped craters that form after a volcano explodes and then collapses into its own magma chamber.

Just to make things more complicated: While all supervolcanoes are calderas, all calderas are not supervolcanoes. Supervolcano calderas are mammoth; they can reach lengths of 55 miles and range in depth from 300 to 5,000 feet. In many ways, the supervolcano is the anti-volcano, says Valentine. If you’re not careful while driving near one, he adds, falling in is entirely plausible.

Anatomy of a Supervolcano.

Scientists have scratched their heads for centuries over three simple questions related to volcanoes: 1) what causes them to erupt 2) how does magma—a near solid—move so quickly through the ground, and 3) how does the aftermath of an eruption play out.

As for the first question, we know that volcanoes need to build up magma before they explode. That’s why supervolcanoes erupt so infrequently; they must hibernate for tens of thousands of years, hoarding magma, to spur an eruption. But volcanoes don’t simply erupt when their magma chamber is full—and therein lies the mystery. The tipping point has perplexed volcanologists for years. “Why didn’t it erupt when it had 20 cubic miles? Why did it wait until it had 200 cubic miles? What’s the trigger?” asks Valentine.

Magma’s ability to flow like water is even more puzzling. Every substance has a viscosity, or resistance to flow. Water, which flows easily, has a low viscosity, while peanut butter rests on the higher end of the scale. Magma, despite being a liquid, behaves like a solid, with a viscosity 1,000 times greater than the crunchiest brand of peanut butter.

How magma behaves once it reaches the surface, and (in the case of stratovolcanoes and supervolcanoes) becomes a pyroclastic flow is the greatest mystery of all. How soon after the eruption the dense cloud of gas and rock falls to the ground, how fast it moves and how far it spreads are all topics of active research.

Answering these questions when it comes to supervolcanoes is especially difficult, as the best way to study a volcano is to see one in action. Unable to wait thousands of years for the next supervolcano eruption, volcanologists use the next best source of information: the deposits left from previous ones.

Valentine was involved in a recent study using this approach to tackle the third mystery, regarding pyroclastic flows. Focusing on the extinct Silver Creek Caldera in Arizona, the research team discovered that the pyroclastic flows from a nearly 19-million-year-old supereruption traveled at the modest speeds of 10 to 20 miles per hour, much slower than what scientists originally believed. Their surprising results back up a theory that the pyroclastic flows that poured from this caldera were a dense, fluid-like cloud of pressurized gas rather than a swift but airy sandstorm.

Understanding how quickly pyroclastic flows move can help volcanologists do a better job of forecasting a volcano’s behavior when it erupts, says Valentine—which is a critical component of disaster preparedness.

Cloudy with a chance of magma

With all of the uncertainty surrounding volcanoes, it’s a wonder volcanologists are able to predict an eruption at all. And yet, they do just that; the U.S. Geological Survey keeps a close watch on all 169 active volcanoes in the country, sometimes spotting early signs of an eruption months in advance.

Much like weather forecasting, volcano forecasting involves studying past and present behavior and using computers to predict how a volcano may act in the future. As above, the secrets behind how a volcano erupted in the past lie in the deposits left after an eruption. The rock can reveal how often a volcano erupts, when the eruptions occurred, how much magma was released and more.

Present behavior is monitored using various gadgets that do everything from tracking changes in pressure of the magma chamber beneath a volcano to measuring whether the ground begins to swell and detecting even the slightest earthquake. These various data points are entered into computer simulations that predict when and how a volcano might wake up.

Volcanologists can typically spot red flags well in advance of an explosion. But forecasts aren’t a sure thing and accuracy can depend on the type of volcano, the number of instruments being used to monitor it and how far into the future a forecast is desired.

“If you want us to forecast what a volcano is going to do tomorrow, we can do that very accurately,” says Valentine. “If you want to know what it’s going to do in 20 years, we can say something, but there’s a lot of uncertainty associated with it.”

At the same time, warning signs aren’t a guarantee of an eruption, and there have been false alarms in the past. This can make a call for evacuation difficult, says Valentine, yet he doesn’t advise against visiting or even living near a supervolcano. Most of them are safe, at least when they aren’t erupting. And Valentine walks the talk—his last home was built near the Valles Caldera.

Ask him what does worry him? “Human-caused climate change,” he says. “It’s happening as we speak and could radically change life on Earth.”

The havoc wreaked by the eruption of Mount St. Helens is miniscule when compared to Yellowstone’s most recent catastrophic explosion.

Volcano: A rupture in the ground that allows magma to escape to the surface

Magma: Rock beneath the Earth’s surface that is so hot it has melted

Lava: Magma that has reached the surface

Ash: Tiny pieces of solidified magma that erupt from a volcano

Pyroclastic Flow: A fast-moving cloud of gas and rock that moves along the ground during an eruption

Magma Chamber: An underground pool of molten rock. When full, the magma forces its way to the surface, causing an eruption

Vent: The hole from which gasses and magma flow out of a volcano

Fissure: A crack in the Earth’s surface. Magma may erupt from here as well

Fault: A crack in the Earth’s crust along which the ground shifts, creating volcanoes, earthquakes and mountains

Hotspot: An unusually hot part of the Earth’s mantle. Causes large amounts of magma to build up in the ground

Active: A volcano that erupts regularly

Dormant: A volcano that hasn’t erupted for years, or even centuries, but will in the future

Extinct: A volcano that is long gone, a result of the magma chamber solidifying

Volcanic Field: A cluster of volcanoes

Tuff: A soft rock made of the volcanic ash emitted from an eruption

Between a Rock and a Hot Place

If you find yourself near an exploding volcano, you’re probably doomed. But maybe not! We asked Sonja Melander (MS ’12), science education coordinator at Mount St. Helens Institute in Amboy, Wash.—and former student of UB volcanologist Greg Valentine—what to do if it happens to you.

1. Be Prepared with a Plan
A disaster kit is useful in any catastrophe, including volcanic eruptions. Make sure to stow food, water, blankets and a radio for listening to emergency messages from public officials. If you are told to evacuate, leave immediately.

2. Look Down and Head Up
Lava is slow moving, so as long as you don’t put your foot in it, you should be OK. Traveling faster than lava are lahars, boiling rivers of concrete created when ash and rock mix with water. Lahars can be avoided if you stay above them, so seek high ground.

3. Cover Your Mouth
Ash can spread for miles beyond the site of an eruption, and will coat everything in sight, including your lungs. Use a damp cloth to shield your mouth and nose.

4. Break Out a Broom
The ash that falls after an eruption will look like snow. It’s not. If not promptly swept up, these bits of rock can collapse roofs, set like concrete over roads and wash into drains, wreaking havoc on sewage systems.