The 2013-14 Space Bulls team in Houston (left to right): Livio Forte, Bill Dell’Anno, Jennifer Zirnheld, Pete Casey and Kevin Burke. Astraeus I is in the foreground.

Share This Print
“Hearing it was a NASA competition made me very excited. I’ve wanted to work for them from a very young age.”
Mustafa Celebi, aerospace engineering graduate student 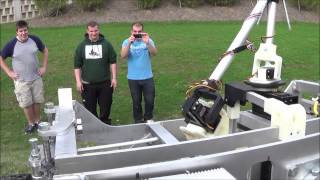 Astraeus I makes a 60° Hill Climb

“Lunar craters” and “Mars Hill” aren’t phrases one normally hears during college club meetings. But when building a robotic space rover, you cover unusual terrain—and so do your conversations.

The first UB Space Bulls team was formed in 2011 to enter the—get ready for it—Revolutionary Aerospace Systems Concepts Academic Linkage (RASC-AL) Exploration Robo- Ops Competition, an annual event sponsored by NASA and the National Institute of Aerospace. A new Space Bulls team came together in December 2013 to compete for the 2014 title.

Asked why he joined this year’s team, Mustafa Celebi, a graduate student in aerospace engineering and the team’s mechanical lead, said, “Hearing it was a NASA competition made me very excited. I’ve wanted to work for them from a very young age. At the first meeting, I saw a room full of intelligent and capable students, and it was impossible not to join and help Buffalo try to get its first victory.”

The UB team, one of only eight chosen to compete this year, included grad students and undergrads from various fields. They created the Astraeus I, named after the Titan god of dusk, from aluminum, PVC, a pan-tilt-zoom camera, an onboard computer, an Xbox and wisdom gained from UB’s original rover team. The machine had to perform tasks that mimic real NASA challenges, like climbing steep angles and collecting rocks. There was even an “alien life form”—a small figurine hidden in a crevasse—which, if “captured” by the rover, would result in extra points.

The competition took place in June, with some team members heading to Houston and others staying at UB, since Astraeus I had to be manipulated from home base—just like a real space mission. After an impressive start, Astraeus I unfortunately flipped onto its roof, finishing its run.

Returning team members already have ideas about how to improve their rover for next year’s competition. Communications lead Kaustubh Vartak, who’s pursuing his master’s in computer science, mentioned acquiring better cameras and stronger motors, as well as ensuring that the center of gravity is spot-on to avoid a repeat of the 2014 incident.

As for those who have moved on, they can’t recommend the Space Bulls club highly enough. “When interviewing for jobs, a significant portion of what I talked about was my experience with this project,” says former team leader Bill Dell’Anno (BS ’14), who graduated in May with a degree in electrical engineering. “We certainly learn a lot in the classroom, but being able to put it to practice with a true engineering challenge is incredibly rewarding.”