Inside a single fruit fly larva neuron, Huntingtin proteins (red) and Rab7 proteins (green) travel along microtubule structures that act as highways, transporting materials from one part of the cell to another. The yellow dots show where Huntingtin and Rab7 are traveling together (red and green fluorescent tags appear yellow when combined). Credit: Shermali Gunawardena

The research sheds light on an enduring neuroscience mystery: the root causes of Huntington's disease 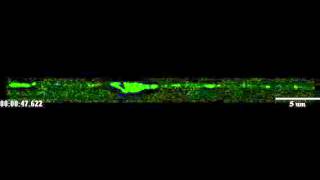 Within a fruit fly larva neuron, Rab3 proteins (green) accumulate inside one or more microtubule tracks that act as intercellular highways, transporting materials from one part of the cell to another. Such "traffic jams" may precede dangerous accumulations of proteins that occur in the brains of patients with neurodegenerative disorders such as Huntington's disease, according to UB researcher Shermali Gunawardena. Credit: Shermali Gunawardena

BUFFALO, N.Y. — We've known for years that the Huntingtin protein (Htt) is responsible for Huntington's disease, a neurodegenerative disorder that diminishes a person's mental and physical abilities.

Create the protein in the wrong form in the human body, and symptoms develop. But why this happens — why mutations in the protein cause disease — is a question that has yet to be answered.

A new study by University at Buffalo researchers marks a step toward understanding this enigma. The research, published Oct. 8 in the journal Human Molecular Genetics, shows that Htt controls the movement of precious cargo traveling up and down neurons, the cells that form the core of the nervous system in animals.

You can literally see this regulation in action: Videos and microscope photos taken by the research team show Htt moving along neuronal highways in concert with precious materials called Rab proteins, which are vital for normal cellular function.

When scientists lowered the amount of non-mutant Htt available, the movement of four different Rab proteins was altered, with the proteins either slowing down or speeding up. Slowing down resulted in traffic jams that blocked other important cargo from traveling in a timely manner to desired destinations in neurons.

The research was done in fruit fly larvae, but all four Rab proteins studied are present in human neurons, and the cellular mechanisms at play are expected to be found in people too.

“The problem with the Huntingtin protein is that we know it’s linked to Huntington’s disease, but we don’t have a full understanding of what the protein’s normal function is — what purpose it serves in the body, and why problems with it lead to disease,” says lead researcher Shermali Gunawardena, PhD, associate professor of biological sciences in UB’s College of Arts and Sciences.

“Our research begins to unravel the mystery of how Htt is involved in Huntington’s disease,” she says. “If we can better understand the role that Htt plays in the body, inside cells, we can perhaps create therapeutics that address the disease at an early stage, before symptoms become severe.”

Gunawardena says it’s possible that the neuronal traffic jams her team observed could contribute to the formation of inclusions — dangerous aggregations of proteins that have been found in the neurons of patients with Huntington’s disease.

Htt as a cell traffic controller

Inside neurons, a network of microtubule structures serves as a highway system, enabling the transport of materials from one part of a cell to another. The vehicles that ferry cargo along these roadways are vesicles — tiny, membranic structures that enclose or otherwise carry materials ranging from neurotransmitters to chemicals used in cellular repair.

The research focused on Htt’s influence on Rab proteins, which travel with vesicles along neuronal highways and are thought to be necessary for vesicle formation and movement.

There are 75 known Rab proteins, and the study looked at the 16 Rabs that are found in both fruit fly and human neurons. When researchers reduced levels of normal Htt in the neurons of fruit fly larvae, it:

Each of these Rab vesicle complexes may transport different materials within neurons and have functions that are vital to the health of the nervous system, so changes in their movement could lead to neurological problems, Gunawardena says.

"Our research starts to create a picture of how Htt may contribute to disease,” Gunawardena says. “If HTT is needed for particular aspects of movement of Rabs and in turn the function of certain Rabs, then ensuring that this pathway is not disrupted could provide a new therapeutic avenue for a disease that is not treatable.”

In addition to Rabs 3, 19, 7 and 2, the movement of a fifth Rab protein was also affected, but researchers are still analyzing findings related to this fifth protein, Gunawardena says. The other Rab proteins studied were not impacted by the reduction of Htt.

The study was funded by the National Institute of Neurological Disorders and Stroke and in part by the John R. Oishei Foundation.