The retirement of NASA's space shuttle program in 2011 unleashed a wave of nostalgia across the United States and beyond. People reminisced about the astronauts who served as childhood heroes. Crowds lined the streets to pay their respects to NASA’s fleet—Enterprise, Atlantis, Discovery and Endeavour—as the ships headed to their final destinations: American museums.

For students of aeronautics, the end of the shuttle program was both poignant and exciting, heralding a new era in the exploration of space. This year, a private company became the first-ever to make a commercial cargo delivery to the International Space Station—a job the NASA orbiters used to perform. Science and engineering graduates from universities across the country are applying to work for startups with names like Planetary Resources and Moon Express.

Against this backdrop of change, UB students hosted the nation’s largest student-run space conference this November. The event, SpaceVision 2012, took place from Nov. 8-11, bringing some of the biggest names in aeronautics to Buffalo.

In a nod to changing times, the conference theme was “Crossroads: How Our Generation Will Take Us to the Space Frontier.”

“It’s definitely a huge shift taking place,” said Mary Magilligan, president of UB’s chapter of Students for the Exploration and Development of Space (SEDS), which hosted the meeting. “My friends who are in aerospace, they’re not all thinking of applying to NASA. A couple of my friends are hoping to apply for SpaceX, which is the first company to build and launch its own capsule into space.”

At the conference, panels covered topics including NASA’s transition into a new, post-shuttle era; whether future space missions should be manned or unmanned; the future of private investment in space; and more.

Private and public sector speakers alike presented a hopeful vision for the development of space, envisioning a future where NASA continues to push the boundaries of exploration and firms like Virgin Galactic work on problems like launching tourists into space.

Landing the conference was a big achievement for UB SEDS, especially considering that the group is relatively new at UB. The chapter was founded in 2007, and Magilligan, a native of Long Island, is only its fourth president.

At last year’s SpaceVision, UB SEDS competed against other chapters nationwide for the right to host the 2012 conference. One reason UB’s proposal won was the forward-looking “Crossroads” theme the club selected, Magilligan said.

Magilligan, a junior studying mechanical and aerospace engineering, watched her first live space shuttle launch in summer 2011 while interning for NASA’s Marshall Space Flight Center. Her childhood dream was to become an astronaut, and she was sad to see the shuttle program go.

With time, however, her perspective has evolved.

“The space shuttle’s job was just to go to the International Space Station and back. It’s not to go to the moon and back,” Magilligan said. With the shuttle program gone, she said, engineers can begin to think about projects like sending humans back to the moon or even to Mars.

The Next Generation in Space

This November, the University at Buffalo's chapter of Students for the Exploration and Development of Space hosted the nation's largest student-run space conference. In this video, members discuss what inspired them to become interested in space—and what they hope the future holds for a changing space industry. This video includes footage from NASA.

Magilligan is drawn to space because she views it as one of humanity’s final frontiers—a wild, uncharted territory that should be explored. Space is about adventure and understanding,  Magilligan said. It’s about learning something new regarding the universe and humanity’s role in it. If that’s the case, Magilligan added, we should be going places.

Zach Pace, a physics major from the Buffalo suburb of Clarence, tracks his infatuation with space back to a solar system episode of the “The Magic School Bus.” As a teenager, he pointed telescopes into the sky and studied the universe—all those distant lights burning in the darkness.

This August, Pace, a former UB SEDS treasurer, was among space geeks everywhere who stayed awake deep into the night to watch the landing of Curiosity, a car-sized robotic rover that NASA sent to Mars. He reminisced about this feat one recent afternoon with Andrew Dianetti, past president of UB SEDS and a native of Lancaster, N.Y.

“We built something millions of miles away and sent it to Mars,” Dianetti said.

And lowered it to the surface with “a hovering crane,” Pace added.

“And we’re now driving it around,” Dianetti said, still amazed.

It’s accomplishments like these that get students excited about the future of NASA and aeronautics.

Dianetti, a mechanical and aerospace engineering major set to graduate in 2013, sees exciting career opportunities cropping up for students interested in space. With NASA freed from the space shuttle and private companies working on problems like launching tourists into low-Earth orbit, today’s space industry offers a greater variety of job possibilities than ever before.

What the future holds is in the hands of the next generation—engineers like Magilligan, who would like to design space vehicles, and scientists like Pace, who would like to use space-based observatories to probe the universe and its origins.

“I have family members who ask me, ‘Why are you still interested in space? There’s hunger and other problems on Earth,’” Magilligan said.

Her response: Exploration is a human instinct, a means to advance our collective culture and better understand our world. We’ll never know what we’re missing until we go. 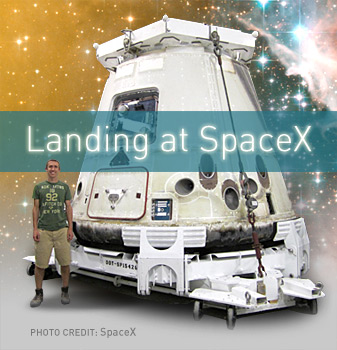 When the private company SpaceX launched its Dragon space capsule into orbit at the end of 2010, UB master’s student Jared Kuhl was watching from his computer in Buffalo. It was the first time that a commercial firm successfully sent a vehicle into space and returned it to Earth.

“They did a live Web cast of the launch,” remembers Kuhl, who was studying mechanical engineering at the time. “So I remember sitting in my office at UB and being like, ‘Oh god, that was awesome.”

Thrilled by the spectacle, Kuhl sent his resume to SpaceX. He landed a phone interview, and was then invited to tour the company’s California headquarters and its rocket development facility in Texas.

He got the job.

Kuhl says his time at UB prepared him for the “full-speed-ahead” work environment at SpaceX. He completed his BS in mechanical engineering here, and studied computational fluid dynamics as a graduate student under Paul DesJardin, professor of mechanical and aerospace engineering. He credits DesJardin with pushing students to work hard and tackle new, unforeseen problems.

“I think the most important thing that helps me that I learned at UB was how to attack something that I’ve never really seen before—how you sort of trace back a problem back to the engineering basics and figure out how to make something work,” Kuhl said.

In July 2011, soon after completing his studies, Kuhl moved to Texas to start work as a ground-support equipment engineer. In that role, he’s part of a team that designs and maintains rocket engine testing facilities. He describes the atmosphere as fun and intense; he’ll often put in a 12-hour day, but the results are exciting to see.

“We test a rocket engine at least once a day out here, and there’s all types of different engines, so we can just walk right outside the office door and watch it any time it happens,” Kuhl said. “One of the first projects I worked on, we made a new test stand for an engine. We did all the up-front work of figuring out and designing the stand, and a couple months later we actually watched the engine fire and use all the systems that we had helped design and build.”

On days—or nights—when SpaceX has an important launch, employees gather in the cafeteria to follow the proceedings. Everyone feels like they’re a part of something special, Kuhl said. When he was a boy, he and his father, a sixth-grade science teacher, used to look up at the night sky to watch the International Space Station passing overhead, a tiny blip of light drifting across a sea of stars.

So it was amazing to watch when SpaceX became the first company to deliver cargo to the space station earlier this year. As the aeronautics industry changes, with private companies playing a greater role in exploring space, there's no place that Kuhl would rather be. 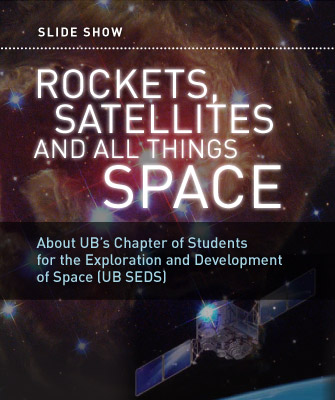 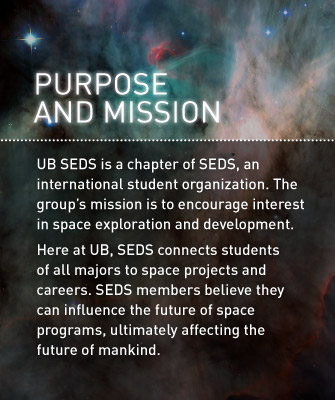 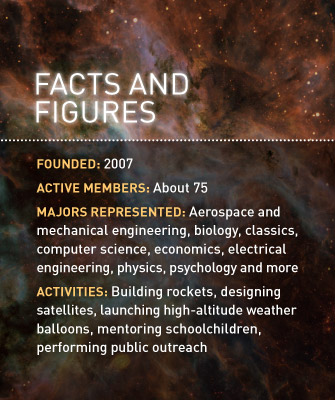 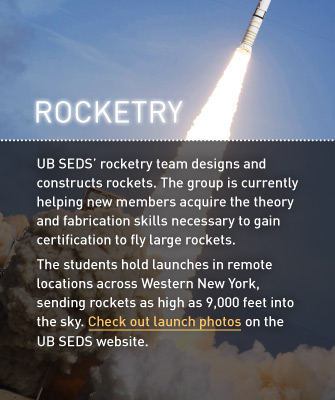 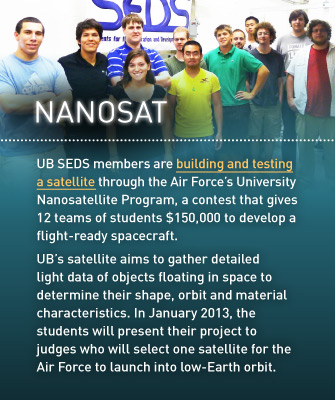 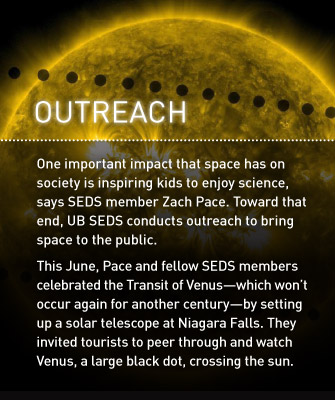 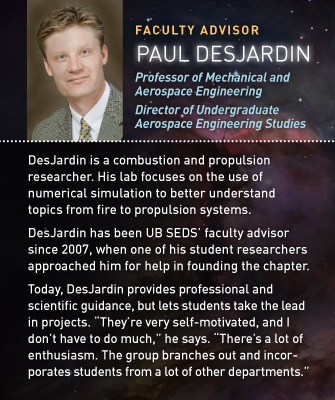 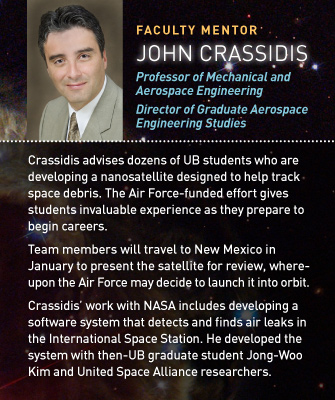