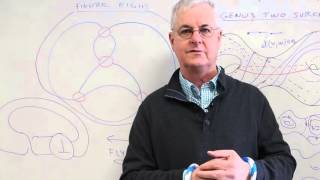 Bill Menasco discusses the math behind a puzzle involving a knotted a rope.

“It was considered a very esoteric field when I started in it, but it has grown immensely and grown in all different directions. ”
Bill Menasco, professor
Department of Mathematics

You may not have heard of knot theory.

It involves the study of mathematical knots, which differ from real-world knots in that they have no ends. You can think of each one as a string that crosses over itself a given number of times and then reconnects with itself to form a closed loop.

“It was considered a very esoteric field when I started in it, but it has grown immensely and grown in all different directions,” says Menasco, professor of mathematics, College of Arts and Sciences.

Today, we know the study of knots could have applications in surprising areas. It could enable security firms to create better encryption systems or elucidate the mysteries of how the body unravels DNA, Menasco says.

A handmade teaching tool — marker on foam board — shows how all knots can be redrawn as what mathematicians call “braids,” where the strands of the knot circle in one direction around a single point. Menasco created this folding poster about a decade ago. Photo: Douglas Levere

Knots first came to prominence in the 1860s when scientists were trying to understand the nature of matter, Menasco says.

At the time, people didn’t know that atoms were nuclei surrounded by electrons, so Lord Kelvin proposed a different theory: He hypothesized that the basic building blocks of matter were knots in the ether, a hypothetical substance that permeated space. He postulated that every element — hydrogen, oxygen, gold and so on — was made from a different kind of knot.

“So the knots are stable: They have certain properties,” Menasco says. “You can heat them up. You can cool them down. You can do certain things to them, but gold is gold and oxygen is oxygen.”

The theory tantalizingly fulfilled some key requirements for a system of building blocks for matter, Menasco says: Many types of knots could exist, comprising many elements, and knots could be linked to form molecules.

“It was,” Menasco says. “But when the physicists lost interest in Kelvin’s work, the mathematicians stepped in and said, ‘Wow.’ Tait tabulated all the knots up to those with 10 crossings, and it was an amazing feat because this table mostly remained unchanged for 100 years.”

“Knot theory is beauty,” Menasco says. “I think geometrically and it fed into my strengths.

Menasco is writing a textbook on mathematical discoveries that resulted from a 30-plus-year research partnership with Joan Birman of Columbia University and Barnard College. He hopes to finish the book, co-authored with his former PhD student Doug LaFountain, an assistant professor at Western Illinois University, this year.

The subject is difficult to explain to a non-mathematician, but it sounds like poetry when Menasco describes it: “Our work was on understanding surfaces associated with knot and links when they are positioned in (x,y,z)-space as a closed braid that winds around the z-axis.”