A research study led by Teresa Quattrin, MD, could prove beneficial for children and young adults with newly-diagnosed Type 1 diabetes.

A Phase 2 research study led by Teresa Quattrin, MD, UB Distinguished Professor of pediatrics and senior associate dean for research integration, shows that the drug golimumab preserves beta-cell function in children and young adults with newly-diagnosed Type 1 diabetes for at least a year after diagnosis.

“The main goal of the study was to see if golimumab could preserve beta-cell function in these newly-diagnosed patients — and it does. ”
Teresa Quattrin, MD
UB Distinguished Professor of pediatrics and senior associate dean for research integration 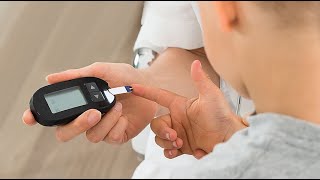 The study — published on Nov. 19 in The New England Journal of Medicine — represents a major step forward in the effort to find ways to preserve the insulin-making capabilities of children and young adults newly diagnosed with Type 1 diabetes.

The study demonstrates that golimumab, an anti-tumor-necrosis-factor (TNF) therapy, reduced the amount of injected insulin required by children and young adults with newly-diagnosed Type 1 diabetes by preserving their ability to produce insulin on their own, called endogenous insulin.

The need for less injected insulin is a major quality of life improvement for patients with Type 1 diabetes, according to the researchers.

Golimumab, marketed as Simponi, is currently used in the treatment of rheumatoid arthritis, ulcerative colitis and other autoimmune conditions. However, it is not approved by the U.S. Food and Drug Administration for the treatment of Type 1 diabetes.

Quattrin, first author on the study, also presented the findings on June 13 at the annual meeting of the American Diabetes Association (ADA).

“The most important finding of our work is that this drug, golimumab, is a potential disease-modifying agent for newly diagnosed Type 1 diabetes,” says Quattrin, attending pediatric endocrinologist at the Diabetes Center at UBMD Pediatrics and Oishei Children’s Hospital. “The main goal of the study was to see if golimumab could preserve beta-cell function in these newly-diagnosed patients — and it does.”

This was assessed by measuring the amount of C-peptide in patients’ blood during a four-hour mixed meal tolerance test. Because C-peptide reflects only insulin made by the body and not injected insulin, C-peptide levels reveal how well the pancreas is producing insulin.

Patients treated with golimumab had a higher C-peptide level at week 52 compared to placebo.

“This was statistically significant; thus the study met its primary goal,” Quattrin says.

Quattrin adds that 41.1 percent of participants receiving golimumab had an increase or a less than 5 percent decrease in C-peptide compared to only 10.7 percent in the placebo group.

Nearly 43 percent of those who received golimumab were in partial diabetes remission (also known as the honeymoon phase) versus 7.1 percent of those receiving placebo. The definition of partial remission was based on insulin dose and blood sugar control levels as indicated by hemoglobin A1C, a measurement of average blood sugar levels over three months.

“In this study, both golimumab and placebo groups achieved good blood sugar control, but patients treated with golimumab achieved it with less insulin,” Quattrin says.

In a post-hoc analysis — an analysis conducted after the conclusion of the clinical trial — those younger than 18 years had 36 percent fewer episodes where blood sugar was less than 54 mg per deciliter, designated by the ADA as level 2 hypoglycemia.

This is important clinically because low blood sugar reactions are dangerous and can even be fatal if untreated. Low blood sugar levels also require immediate attention, often causing the child to be removed from classroom or recreation activities, compromising quality of life.

The drug is self-administered as a subcutaneous injection every two weeks. No serious side effects related to the study drug — such as serious infections — were reported.

The randomized, controlled clinical trial was conducted at 27 centers throughout the U.S., including at the Diabetes Center at UBMD Pediatrics and Oishei Children’s Hospital in Buffalo. It involved 84 patients, ages 6 to 21 years, with two-thirds receiving golimumab and one-third receiving placebo starting within 100 days from diagnosis.

Throughout three decades as a leading researcher in pediatric endocrinology, Quattrin has been interested in finding ways to extend the remission, or honeymoon period, to preserve the ability of recently diagnosed Type 1 diabetes patients to continue to make insulin on their own.

The current study took place on the basis of positive findings in animal models, as well as Quattrin’s work with patients treated at the Diabetes Center at UBMD Pediatrics and Oishei Children’s Hospital. It confirms results published by her team in 2009 where in a randomized pilot study 10 patients received another TNF inhibitor and eight received placebo starting within 28 days from diagnosis.

The results of this small proof-of-concept study strongly suggested that this class of drugs might be able to preserve beta-cell function in newly diagnosed patients with Type 1 diabetes.

Jacobs School of Medicine and Biomedical Sciences Department of Pediatrics sub-investigators in the research are:

They were supported by the pediatric diabetes-endocrinology research team at the Diabetes Center at UBMD Pediatrics and Oishei Children’s Hospital, led by Amanda House.

Other co-authors of the research presented at the ADA and on the New England Journal of Medicine paper were from Emory University, the University of Colorado, the University of Florida and Janssen Research & Development LLC. The World Without Disease Accelerator — a group within Janssen — funded the study.