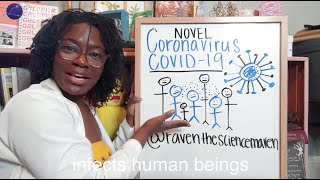 Raven Baxter, a.k.a. “Raven the Science Maven,” is a 26-year-old UB GSE PhD science education student who took on the coronavirus and went viral herself. Her rap music video “Wipe it Down” about keeping clean and keeping safe went on YouTube last week, got her a story on local Spectrum News and CNN’s “must-watch” list.

From there her video went up on news stations from New York City to Hawaii. This week a new story debuts on the local WIVB-TV Channel 4. She also gave Fox News and ABC permission to distribute.

“It’s scary having all those people looking at me, but I guess I kind of asked for it when I put that video out there,” said Baxter with a laugh.

She wrote the words in about an hour, made the video on her phone and remixed the music to the beat of another popular rap, “Wipe Me Down” by Lil Boosie. Her take: “Wash your body, wash your hair and wash your hands, too. Get some soap, scrub it down and show me how you do it.” A day later it was online: http://youtu.be/OvMrNfK9fF4.

The point: Empower folks with humor, science information and a healthy to-do. She now counts her Instagram, Facebook and Twitter followers by the thousands. This includes her current favorite, the world’s most powerful x-ray telescope — NASA’s Chandra X-Ray Observatory, Cape Canaveral, Florida.

Baxter, who researched the effects of media representation on black women in science for her dissertation, has more science music on the way. She’s recording an album and aims to release “Protocol” in May. “It’s going to be the new protocol for people like me who want to be their unapologetic selves in science,” said Baxter.