A rare, debilitating condition in pregnancy that causes nausea and vomiting so severe that some women end up terminating their pregnancies can be effectively treated with the seizure drug gabapentin. 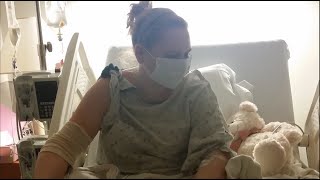 New Relief for Severe Sickness in Pregnancy
Share This Print

That is the finding of a new study of 21 women with the condition led by the Jacobs School of Medicine and Biomedical Sciences and published Oct. 29 in the American Journal of Obstetrics & Gynecology Maternal Fetal Medicine.

It is the first double-blind, randomized controlled trial that demonstrates an effective therapy in treating outpatients with hyperemesis gravidarum (HG), the condition that afflicted Kate Middleton, Duchess of Cambridge, during her pregnancies.

A study participant tells her story in this video.

Led by Thomas J. Guttuso Jr., MD, professor of neurology and a physician with UBMD Neurology, the research was supported by the Eunice Kennedy Shriver National Institute of Child Health and Human Development of the National Institutes of Health.

“Gabapentin is the first therapy shown to effectively reduce nausea and vomiting and improve oral nutrition in patients with hyperemesis gravidarum,” Guttuso says.

The double-blind study was conducted on 21 women who didn’t respond to standard treatments and who required intravenous hydration. Patients were randomized to receive either oral gabapentin (12 patients) or a standard-of-care treatment, oral ondansetron or oral metoclopramide (nine patients) for seven days.

“Even more striking is the fact that gabapentin therapy provided a 96 percent increase in oral nutrition scores and a 254 percent increase in global satisfaction (a measure of how satisfied patients were with overall outcome) of treatment compared to standard-of-care therapy,” he adds.

“Nausea and vomiting in pregnancy is very common,” Guttuso explains, “but hyperemesis gravidarum is rare and on the very far end of the severity spectrum. It’s devastating. The nausea and vomiting are just relentless all day and often all night, too, so these women can’t sleep. They can’t keep anything down. It wreaks havoc on virtually every aspect of a woman’s life.”

Patients become dehydrated and often have to be admitted to the hospital, he explains, where their condition improves with intravenous fluids.

“But after discharge, at least a third end up being readmitted because none of the treatments we have right now are effective,” Guttuso says.

Inability to Eat or Drink Can Hurt Baby’s Growth

“This is a really tough disorder to manage,” says Vanessa M. Barnabei, MD, PhD, professor of obstetrics and gynecology, who helped recruit patients but who was not involved in the study.

“These women want to be pregnant, they want to do what’s best for the pregnancy, and they are really miserable,” she says. “Many of them come in and they haven’t had anything to eat or drink for two or three days or more because every time they try to eat or drink something they just bring it right back up.”

Of course, the inability to eat or drink can negatively impact the baby’s development. Guttuso notes that women with HG who gain less than 7 kg (about 15 pounds) during pregnancy are significantly more likely to have an infant delivered prematurely, of low birth weight and with a low Apgar score, which is used at birth to assess the health of newborns.

Guttuso says surveys show as many as 15 percent of women with HG have such severe symptoms that they end up terminating their pregnancies.

One woman experienced vomiting so violent that it ripped a hole in her esophagus; she had considered terminating her pregnancy but once she was on gabapentin, she was able to carry the baby to term. She also went on to have another child when she was again treated with gabapentin.

“Not only did gabapentin decrease nausea and vomiting in these women, but it significantly improved their oral nutrition as well,” Guttuso says. “This is very important because it’s the women who lose the most weight and have the worst nutrition while they’re pregnant. It adds more risks both to themselves and to the fetus.”

“A therapy that can improve oral nutrition and decrease nausea and vomiting certainly could be of great value to women with hyperemesis gravidarum,” he adds.

Result of Accidental Discovery as a Resident

Guttuso’s interest in gabapentin stretches back decades, the result of an accidental discovery he made as a neurology resident.

After Guttuso prescribed it to a breast cancer patient for her hot flashes, she informed him that it also appeared to fully resolve her refractory nausea and vomiting that had been induced by chemotherapy. That led Guttuso to see if gabapentin might be able to treat HG.

In 2010, he collaborated with other Buffalo physicians to conduct a pilot study with seven women with HG.

Next Step to Enroll More Women in Larger Study

The next step is to enroll more women in a larger study. Guttuso notes that a major drawback of the current study was its very small size, driven, in part, by the reluctance of women with HG to stop taking whatever medication they had been prescribed, even if it wasn’t very effective.

“With a different study design and with more study sites, we will be able to enroll many more women,” Guttuso says. “If this subsequent larger study also shows positive results, this will reassure the medical community that this is a true effect that’s consistent and reliable.”

Co-authors on the study are: