Internationally recognized as an accomplished researcher and transformative higher education leader, Dr. Satish K. Tripathi was appointed the 15th president of the University at Buffalo on April 18, 2011.

Dr. Tripathi joined the University at Buffalo in 2004, serving as UB’s provost and executive vice president for academic affairs until his appointment as president in 2011.  As Provost, Dr. Tripathi led the recruitment of many prominent faculty to the university and oversaw a significant increase in the number of faculty hired to develop and enhance strengths in key areas of research and scholarly activity.  As a result, the university achieved substantial increases in research expenditures and federally awarded research grants, putting UB in league with the top national research universities in the United States.

Dr. Tripathi's impressive body of work as a scholar and academic leader and his compelling vision for UB's future made him the UB Council's unanimous recommendation to lead our university."

Under Dr. Tripathi’s leadership, the academic profile of UB’s undergraduate and graduate students also has improved significantly. He led a number of efforts to enrich the educational experiences of UB undergraduate students by introducing programs designed to provide them with opportunities to engage in learning and research with UB’s top faculty.  He also oversaw the development of innovative “living-learning environments” constructed as part of “Building UB,” the university’s comprehensive physical plan.

Dr. Tripathi led a strategic planning process for UB’s international programs that has led to significant expansion of the university’s international presence and the continued globalization of its three Western New York campuses.  He signed a memorandum of understanding in 2005 with Indian Prime Minister Manmohan Singh to establish the Indo-U.S. Inter-University Collaborative Initiative in Higher Education and Research, which has led to a significant partnership between UB and Amrita University.  UB’s educational programs in Singapore, in partnership with the Singapore Institute of Management, also have experienced significant growth under Dr. Tripathi’s leadership.

Dr. Tripathi was one of the principal creators of the UB 2020 long-range academic plan, and has led the university to achieve significant growth in research and scholarly activity, enhanced student quality and diversity, and an expanded international presence.  Building on this strong foundation, Dr. Tripathi’s vision for UB’s future focuses on moving the university into the highest ranks of the nation’s leading research universities through expanding its reach and impact locally as well as globally. 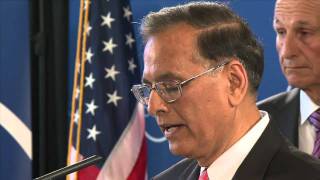 The University at Buffalo continues to experience a remarkable era of growth, progress, and innovation under Dr. Tripathi’s leadership as president.  Within his first year as president, the university celebrated a number of major milestones, including the passage of the NYSUNY 2020 legislation that has led to historic reforms for UB and the SUNY system of public higher education as a whole. Since Dr. Tripathi assumed the presidency in 2011, the university has also opened five major building projects on its three campuses, celebrated a $40 million bequest that is the largest gift in university history, and is moving forward with a long-anticipated plan to relocate its medical school downtown into a world-class new facility that will be the hub of a thriving life sciences community in Buffalo. The university also recently received designation of a New York State Center of Excellence in Materials Informatics, positioning the university at the forefront of the rapidly expanding field of advanced materials.

A leader in the national higher education community, Dr. Tripathi serves on the College Football Playoff Board of Managers and has served as chair of the Mid-American Conference Council of Presidents as well as on the boards of the NCAA Division I and NCAA Board of Governors. In addition, he has served on the boards of the Association of American Universities, the Association of Public and Land-Grant Universities, the Council for Higher Education Accreditation and as a member of the Reimagine NY Commission. Among his numerous community leadership roles, Dr. Tripathi was appointed the inaugural co-chair of the Western New York Regional Economic Development Council in 2011, a position he held until 2017.

A fellow of the IEEE and the American Association for the Advancement of Science, he has published more than 200 scholarly papers, supervised more than 30 doctoral and postdoctoral students and served on program committees of numerous international conferences. In 2006, Dr. Tripathi was awarded the honorary doctorate of sciences from the prestigious Indian Institute of Information Technology, Allahabad, and in 2016 he received an honorary doctorate of law from Brock University in Ontario, Canada. He also has been honored with the 2009 Distinguished Alumnus Award from Banaras Hindu University.