Such waves, called solitons, retain their shape and speed when passing through other such waves

Share This Print
“Zabusky and Kruskal’s famous work from the 1960s gave rise to the field of soliton theory. But until now, we lacked a simple explanation for what they described. ”
Gino Biondini, professor of mathematics
University at Buffalo

BUFFALO, N.Y. — Solitary waves called solitons are one of nature’s great curiosities: Unlike other waves, these lone wolf waves keep their energy and shape as they travel, instead of dissipating or dispersing as most other waves do.

In a new paper in Physical Review Letters (PRL), a team of mathematicians, physicists and engineers tackles a famous, 50-year-old problem tied to these enigmatic entities.

The puzzle dates back to 1965, when physicists Norman Zabusky and Martin Kruskal came up with a surprising solution to the Korteweg-de Vries equation, which serves as a mathematical model for describing nonlinear waves in shallow water.

Using a computer, Zabusky and Kruskal generated an approximate solution to the equation that featured eight independent, particle-like waves. Each of these waves retained its form and speed over time and distance — even after colliding with other such waves. The colleagues coined the term “soliton” to describe these unusual entities, giving birth to modern research in this field.

Kruskal and others then went on to invent a new mathematical method to solve the Korteweg-de Vries equation exactly. However, the calculations needed to obtain concrete answers are complex, typically requiring the use of a computer to complete — thus limiting scientists’ ability to understand phenomena, including Zabusky and Kruskal’s 1965 solution, says University at Buffalo mathematician Gino Biondini.

Moreover, to Biondini’s knowledge, the original wave pattern that Zabusky and Kruskal described in 1965 has never been fully reproduced in the physical world (though earlier experiments have managed to generate portions of the solution).

The new PRL study, published Sept. 28, addresses both of these problems, says Biondini, a co-author on the paper.

A new approach to an old problem 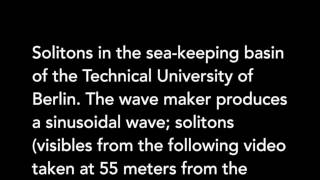 A video explains the new research in Physical Review Letters.

With Guo Deng, a UB PhD candidate in physics, Biondini developed a mathematical approach that produces an approximate solution to the equation that Zabusky and Kruskal tackled in the 1960s. The new approach enables researchers to make explicit, accurate predictions about how many solitons will emerge in a given setting, as well as what features these waves will have, such as their amplitude and speed.

The method’s simplicity means that researchers can use it to gain a better mathematical understanding of soliton formation in these kinds of situations, Biondini says.

“Zabusky and Kruskal’s famous work from the 1960s gave rise to the field of soliton theory,” says Biondini, a professor of mathematics in the UB College of Arts and Sciences. “But until now, we lacked a simple explanation for what they described. Our method gives you a full description of the solution that they observed, which means we can finally gain a better understanding of what’s happening."

While Biondini and Deng worked on the theoretical side of the problem, colleagues in Europe and Japan put their math to the test in real-world experiments as part of the same paper.

Led by Italian scientists Miguel Onorato and Stefano Trillo of the University of Turin and the University of Ferrara, respectively, the team ran experiments in a 110-meter-long water tank in Berlin using a computer-assisted wave generator. The wave patterns they produced matched well with Biondini and Deng’s predictions, and included the original eight-soliton solution described by Zabusky and Kruskal so many years before (though it should be noted that water waves do begin to lose some energy after traveling over long distances, and are therefore only approximately solitons).

“Previous experiments had produced parts of the famous results from 1965, but, as far as I know, they all had limitations,” Onorato says. “We were able to generate the solution more fully, including all eight solitons. We were also able to experimentally generate another feature observed in multi-soliton solutions, namely the strange phenomenon of recurrence, in which a wave pattern transitions from its initial state to a state with several solitons and back again to the original state. This is akin to placing a bunch of children in a room to play, then returning later to find that the room has been returned to its initial, tidy state after a period of messiness.”

The study was supported by the Italian Ministry of Education, University and Research; the U.S. National Science Foundation; the Japan Society for the Promotion of Science; and the Burgundy Region.