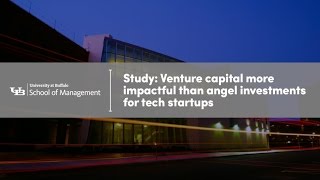 BUFFALO, N.Y. — Technology entrepreneurs who get funding from venture capitalists go public sooner and have more impactful innovation than those who partner with angel investors, according to research from the University at Buffalo School of Management.

Published in the Journal of Business Venturing, the study found that high-tech startups that received funding from venture capitalists were able to find a buyer or issue stock sooner than those that received angel investment — and the patents issued by venture capital-funded firms had greater reach.

The study’s authors say that angel investors bring some benefits of their own, however.

“While the stringent control rights that venture capitalists have can move startups toward success, it can also create conflict with founders,” says Dutta. “Angels, who are investing their own money, tend to be more flexible and less focused on immediate financial returns, allowing longer-term experimentation.”

Dutta collaborated on the project with Timothy Folta, PhD, professor and Thomas John and Bette Wolff Family Chair of Strategic Entrepreneurship at the University of Connecticut School of Business.