The house at 139 Howell Street was falling to pieces when four UB architecture students discovered it in 2008. Holes gaped from crumbling walls. Downstairs, windows were boarded up. Upstairs, ribbons of cream-colored paper peeled off the ceiling.

Tucked away on a quiet street in Buffalo’s Black Rock neighborhood, the place was a ruin, a relic of what it once was. But the students—Dan Stripp, Ernest Ng, Paul Dudkowski and Michael-John Bailie—saw something special in the decaying structure. They bought the property for $6,500 at a city auction and began fixing it up.

Over the course of a year, they gutted the home and transformed what remained into an architectural gem: a tiny house with enormous character. Skylight and high ceilings make the 650-square-foot structure feel bigger than it is. Four cube-shaped rooms—a parlor and three bedrooms—add a whimsical touch, jutting out partway from the dwelling’s slate-colored exterior.

The renovation, titled “Quad Space,” served as the students’ master’s thesis project. Afterward, Bailie, Dudkowski and Stripp lived together in the house, along with Stripp’s girlfriend, Stephanie Vito, and his dog, a black Labrador mix named Cosmo.

Dudkowski moved out after about four months, and Bailie after another six. But Stripp is still in residence with his girlfriend and Cosmo. Now adept at minimalist living, Stripp took time to reflect on “Quad Space” and answer questions about what it’s like to live inside his own thesis project.

Q: Quad Space was your UB thesis project. Were you surprised that your professors supported your idea to rebuild a house?
A: I did my undergraduate degree at UB, and the main reason I came back was because of the relationships I had with professors. They’re very welcoming to new ideas, and once you develop a level of trust with them, they’re open to letting you do what you want. They’re great to work with—they know a lot about what they do.

Q: Were you planning, all along, to live in Quad Space? Or did that just happen by chance?
A: I expected to live there for at least a year after. It’s a rare thing for an architect to live in his own design space, so to really experience the space has been rewarding. You can see what actually works and what doesn’t work.

Q: What do people say when you tell them how large—or rather, how small—the house is?
A: They're actually surprised at the square footage number because they think it's bigger. It feels larger because of the open-height spaces, and one of the upper bedrooms that might feel small has a skylight, which also helps.

Q: What’s the best thing about living in a minimalist house?
A: I have two things: The low amount of cleaning time, and cheap utility bills.

Q: What’s the worst thing about living in a minimalist house?
A: I think the small kitchen. We do a lot of cooking, and the stove is small and the counterspace is limited. All we have is an under-counter fridge, which is 3 feet high, so we have to go grocery shopping every week. When there were more of us living there, we had to do it every three days. My family always did it every two weeks.

“It is exactly this type of creative energy that shows others that investment in urban neighborhoods is a valuable and necessary element if a city like Buffalo wishes to prosper again.” 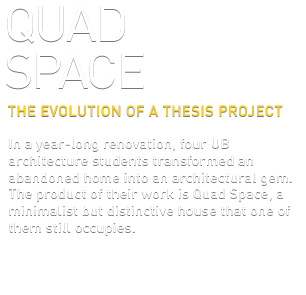 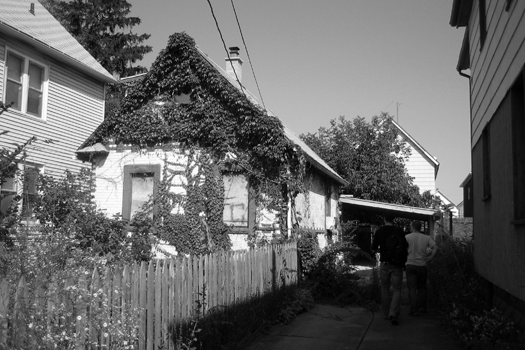 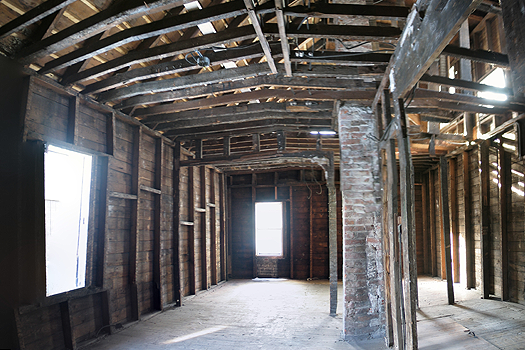 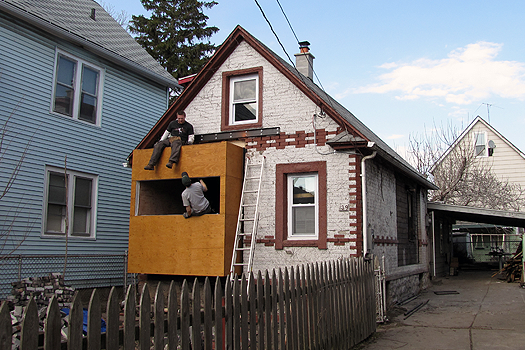 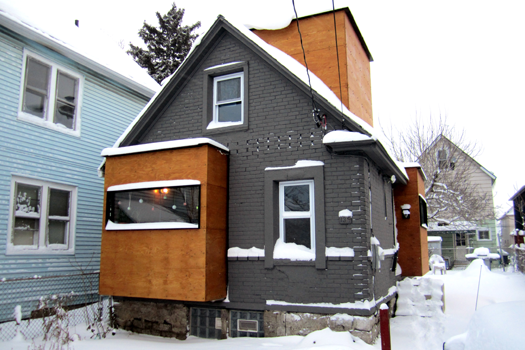 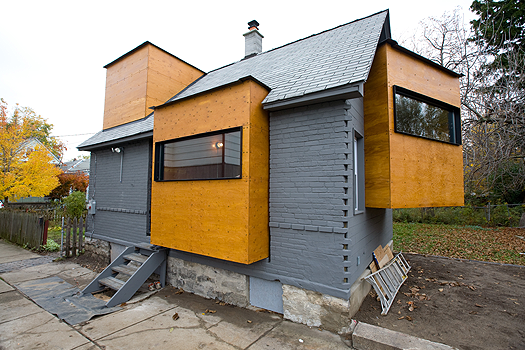 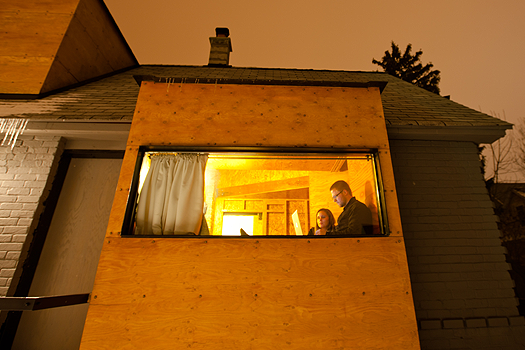 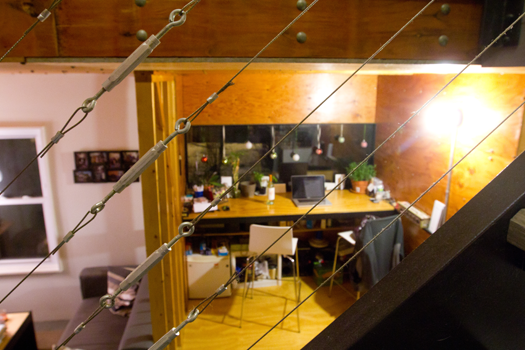 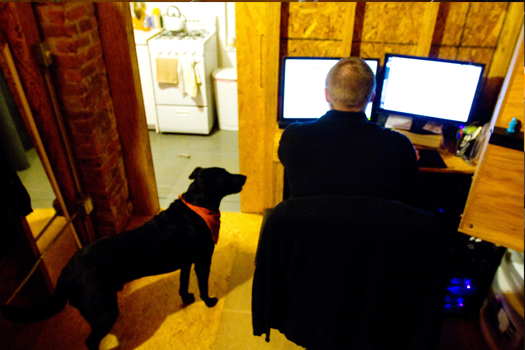 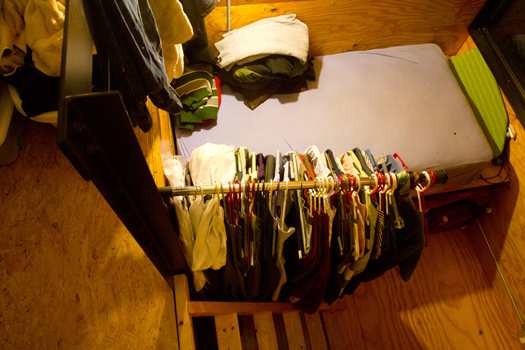 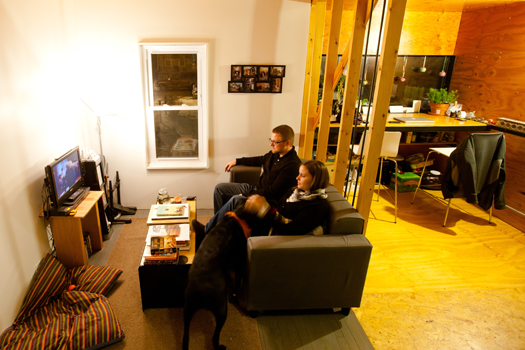 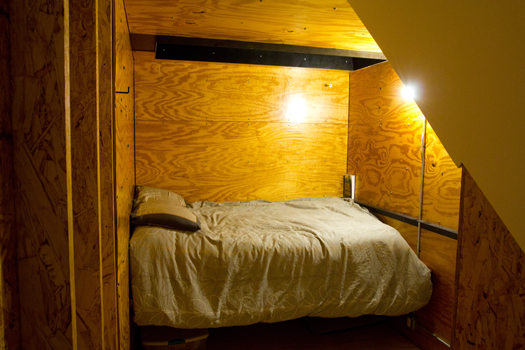 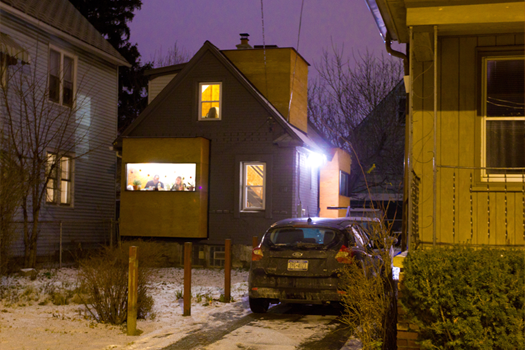 Q: What else have you learned to live without?
A: Mainly furniture, and also small storage things, like bookshelves. We don’t really have any, and I keep going back to bookshelves because we have so many books lying around. We always talked about that—how could we do a closet, or a place to put books? We just never had time to actually do it.

The other thing is a covered entry. I still don’t know how I would do that, but it would be nice to have.

Q: How did it feel to be squashed together, in such tight quarters with roommates?
A: The best thing is just getting even closer with them. We started eating meals together, which I never did with roommates before. We started planning our shopping together, stuff like that, so I think the house forces interaction even more.

The worst thing is a lack of privacy—sometimes, you want to be alone, and it’s hard to escape. But it wasn’t bad at all, really.

Q: Do you have any advice for people interested in living ‘smaller?’
A: Get used to getting rid of stuff you don’t need—(stuff like) little knick-knacks that you put on your desk. My girlfriend has learned now, but in the beginning, she brought way too much, and she just had suitcases full of clothes that she couldn’t hang up anywhere.

Once you get rid of it, you realize that you never really needed it. It’s kind of liberating in a way. Now, when I get new clothes, I get rid of old clothes instead of saving old clothes I never wear.

Q: What are you up to, now? How has Quad Space influenced your career?
A: I'm working at Architectural Resources, which is a firm with locations in Buffalo and New York City. We do a range of projects—educational, commercial, private residence. I was hired full-time as a junior architect this September.

The process of designing and building an actual house has helped ease the process of going into a work environment. During my interviews, they were very impressed with the project. The construction background will always help me—if I ever don’t have a job, I can always fill in with that kind of work. When I first graduated, I did independent contracting in construction and design.

“Everything was done in a very cost-conscious manner, but you wouldn’t know it when you go there. When you first see it you’re not thinking, ‘Oh, this house was done really cheaply.’ You say, ‘Wow, that is an amazingly beautiful space.’ ”

Read about the project in UB Reporter or The Buffalo News. View construction photos on the Quad Space blog.

View and interact with the floor plan

Want to see more? Check out an interactive floor plan of Quad Space on Wallpaper.

Find out what the architects were thinking

Get the inside story. In "Quad Space," a book, the architects chronicle the evolution of Quad Space in words and pictures.

Our School of Architecture and Planning is unique in SUNY. We offer a BS in architecture, as well as SUNY's only accredited master of architecture degree.