On an 11,000-Mile Bike Ride, a UB Alum Discovers What Americans Really Think About the Environment 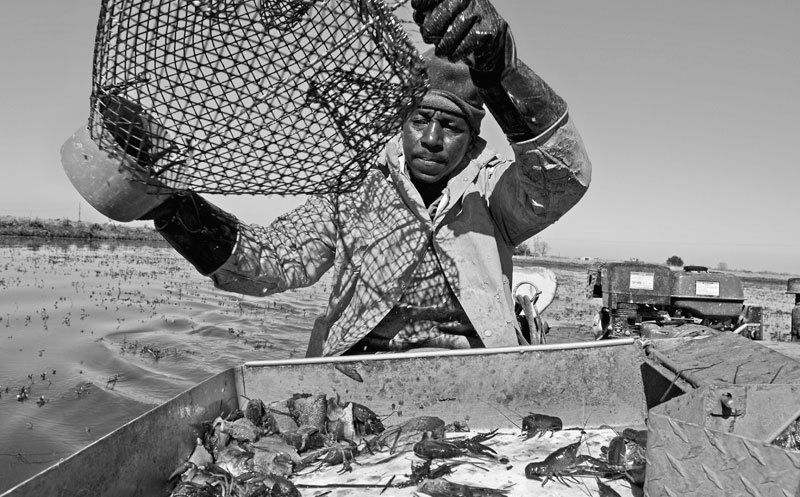 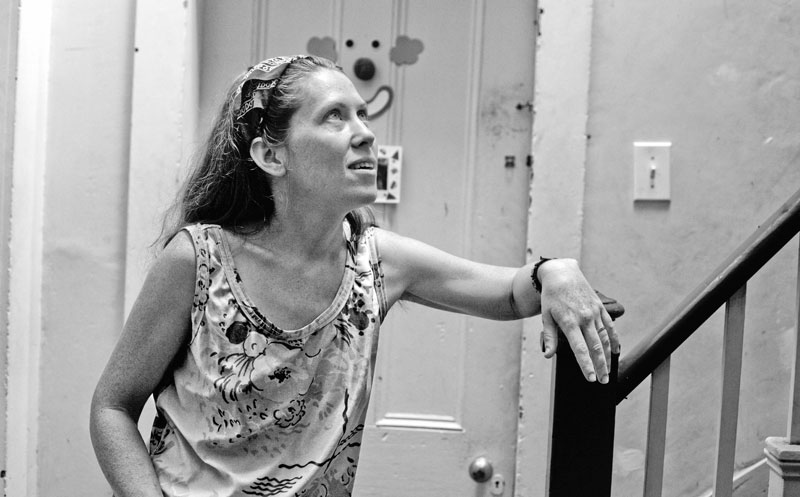 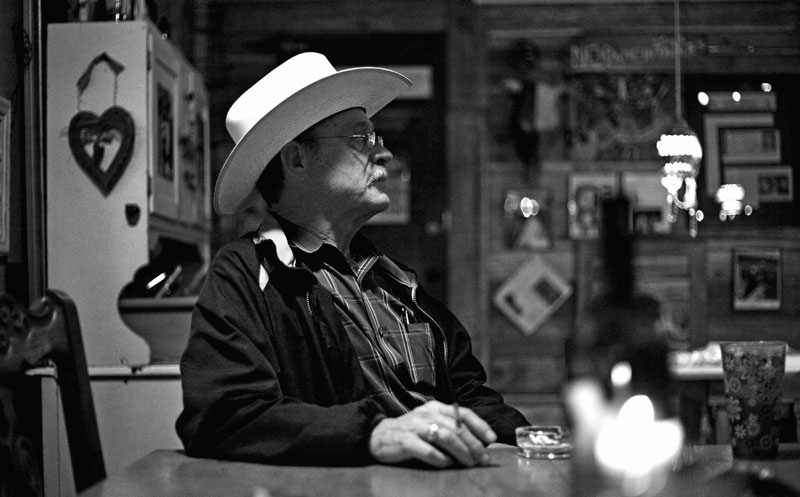 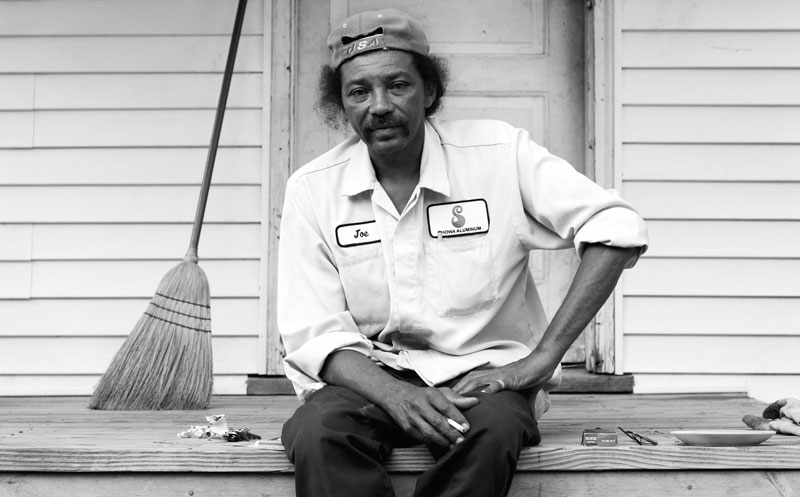 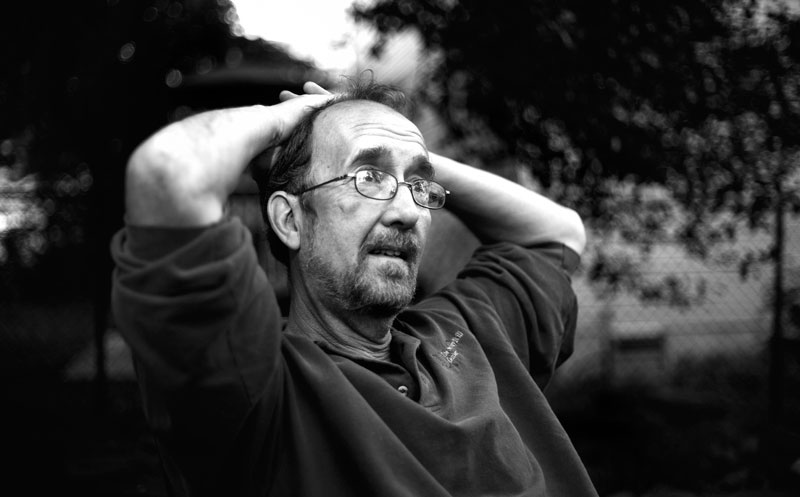 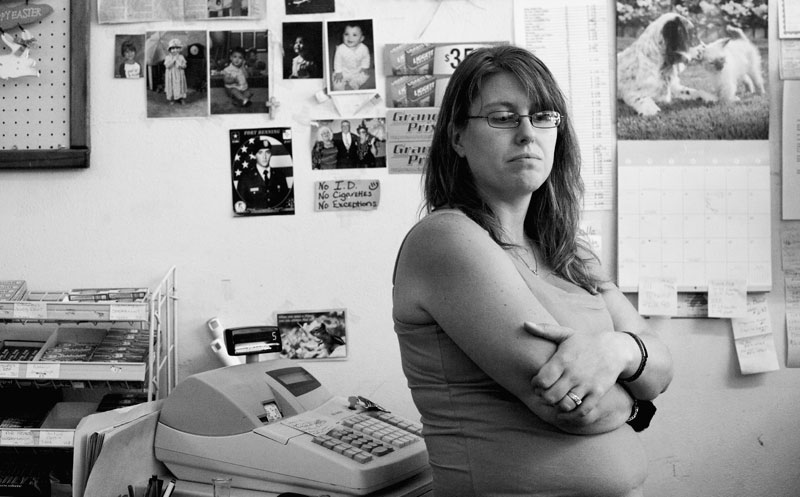 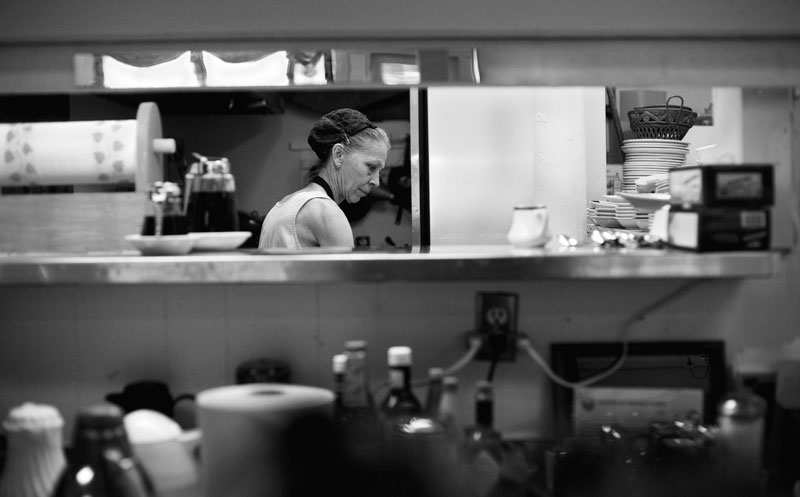 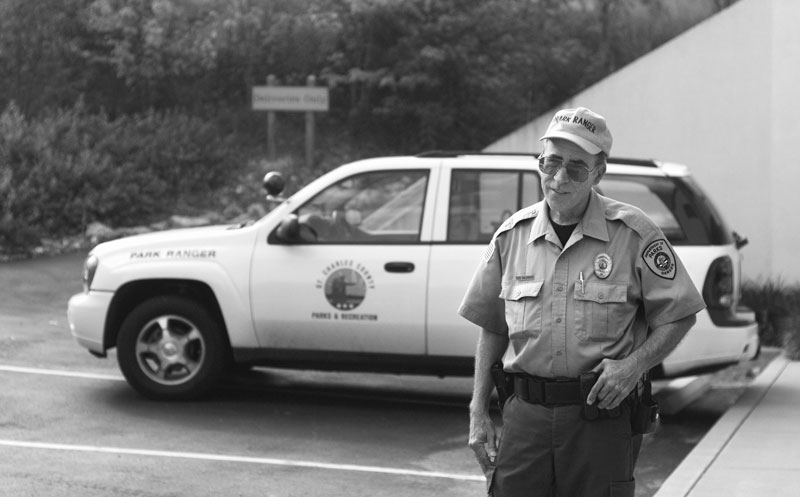 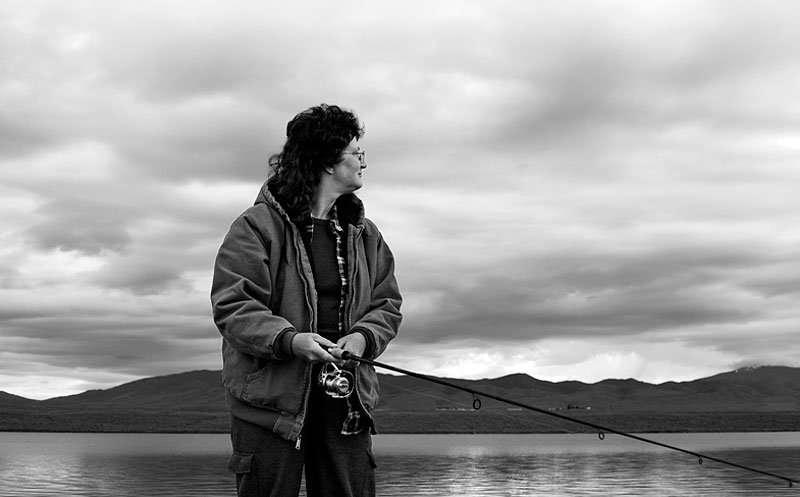 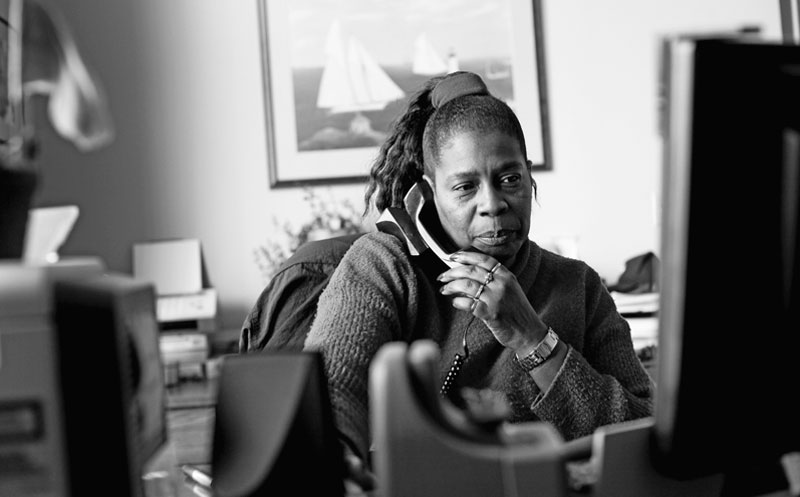 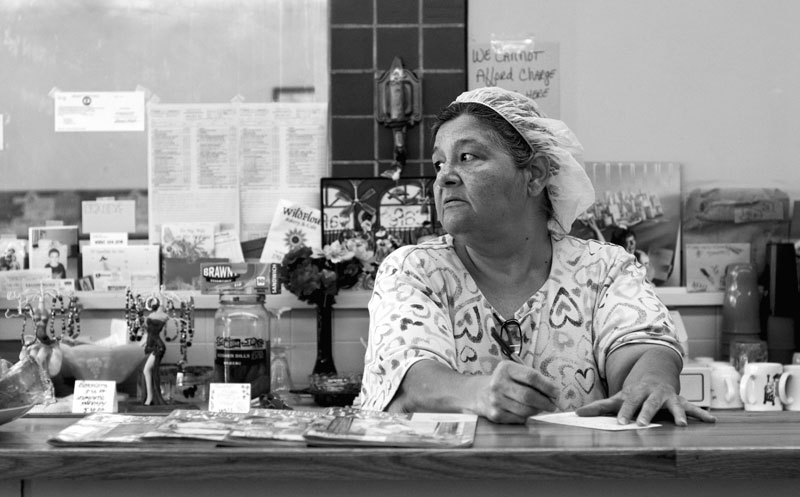 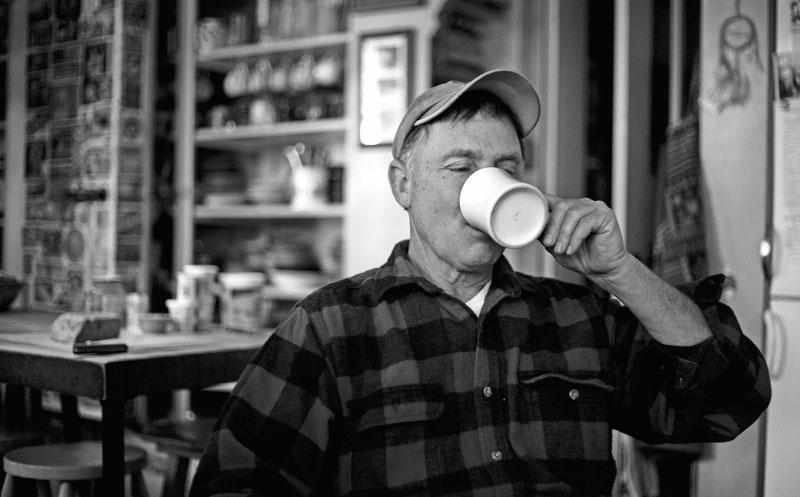 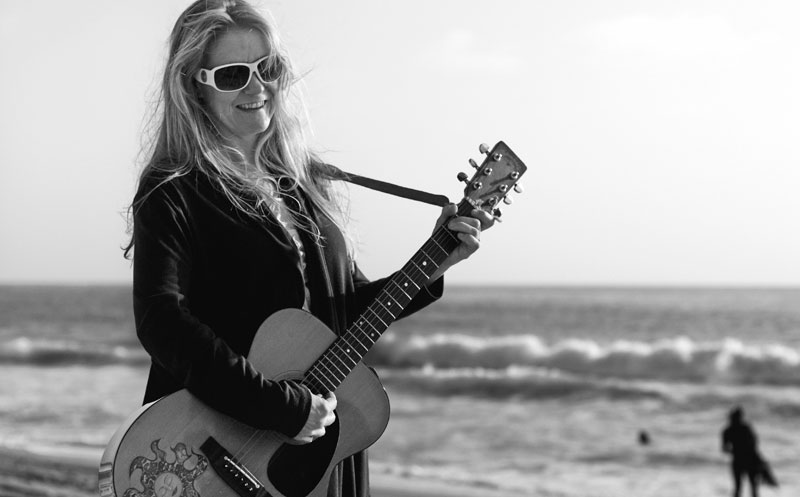 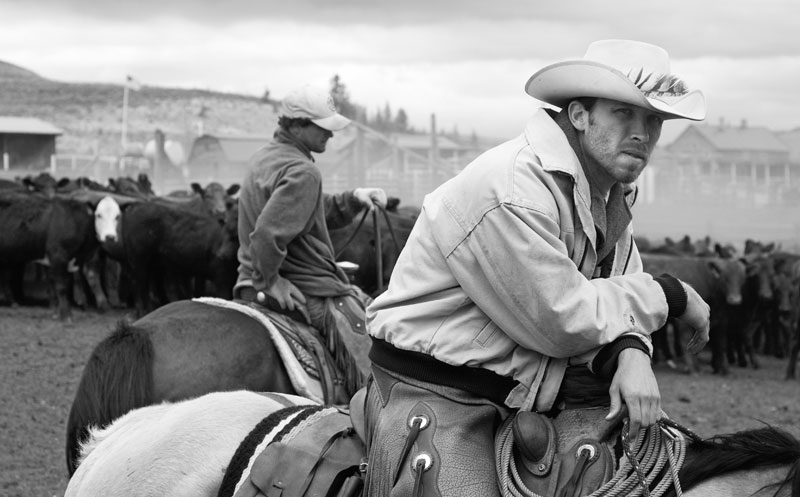 Photographers Morrigan McCarthy and Alan Winslow, a UB alum, bicycled through 30 states on a journey to document Americans’ opinions on the environment. These portraits of interview subjects, along with the accompanying audio clip below, are among materials the partners gathered during their 11-month trip.

Hear what Winslow's interview subjects had to say about the environment

Three years ago, UB alum Alan Winslow set out to see America. With Morrigan McCarthy, a friend, Winslow packed cameras and digital recorders onto a pair of bicycles. Over the next 11 months, the partners—both photographers—zig-zagged through 30 states on an 11,000-mile ride.

Their goal: To document, through pictures and sound, the opinions of small-town Americans on the environment.

Their journey, which they called “Project Tandem,” culminated in a gallery exhibit that they have been showing for the past two years in cities including Rockland Maine, Henniker, N.H., Washington D.C., West Palm Beach, Fla. and Buffalo. 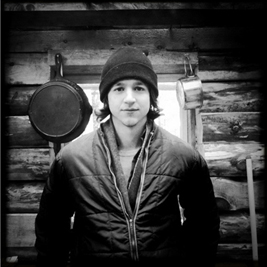 "Cycling is a great way to see the country at 10 mph. You're forced to look at everything and observe everything. The culture in these small towns is so much different. It was just a really fascinating experience to see what's important to people."

The show includes black-and-white portraits of the people they met—a fisherman unloading crawfish in Mamou, La., a real estate broker standing in a beachfront home in hurricane-battered Florida—along with audio of the subjects discussing their perspectives.

The daughter of a midwestern farmer worried that small reductions in water quotas for irrigation would keep her father from growing enough crops to make a living.

In Wyoming, a cattle rancher reported that the reintroduction of grey wolves to Yellowstone National Park had been so successful that the predators were now killing cows on his property.

The openness of the people Winslow met, along with their very real concerns, changed his thinking on the environment and America.

He realized that national problems had local impacts and needed local solutions.

He also observed that many rural residents, while refusing to call themselves environmentalists, had smaller carbon footprints than green-minded city dwellers accustomed to luxuries like air travel or imported food.

Most people Winslow encountered lived more simply. Some ate what they hunted.

Winslow, who graduated from UB in 2007 with a bachelor’s degree in photography and environmental studies, says Project Tandem opened his eyes to how little he really knew about America.

Simple curiosity sparked the endeavor: He and McCarthy were living in New York City in 2008 when they began discussing how newspapers were reporting on the environment.

“The media was covering this issue using polls and statistics, and we decided that wasn’t giving people a voice,” he says. “So we came up with this idea of going around the country to ask real people what they thought.”

Along the way, Winslow’s academic training enabled him to ask intelligent questions about natural disasters, water pollution, sustainable forestry and other topics.

His experience volunteering with Earth Spirit, a nature education program founded by a UB lecturer, gave him the confidence to talk to strangers.

His advice to the rest of us: Travel more around America. Listen to what people in other parts of the country have to say. Learn from the diversity of cultures and ideas that exists right here, at home. 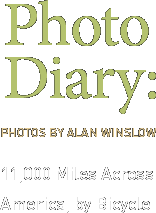 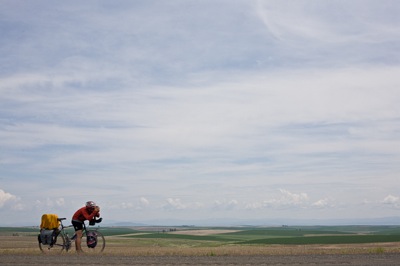 After riding through several bad storms, Winslow stopped to photograph a beautiful day in Idaho's Snake River Valley. This picture of Winslow, shot by McCarthy, captures the essence of journeying by bicycle. "I don't think I would have noticed this image if I wasn't traveling at 10 miles per hour," Winslow said. 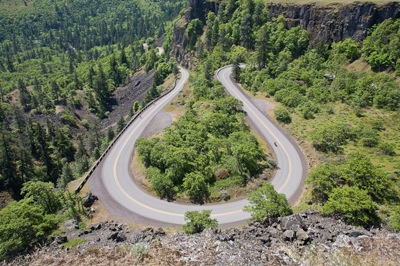 Winslow and McCarthy rode through deserts, thunderstorms, windy coastal highways and lonely plains. Even so, the steep, curved roads of Wasco County, Ore., were among the most treacherous the riders conquered. "That little dot on the right side is Morrigan going down the pass," Winslow said. 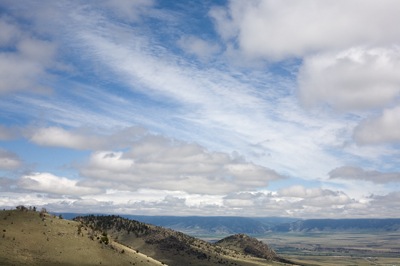 The wide-open spaces in and around Virginia City, Mont., stunned Winslow and McCarthy. The two, both professional photographers, had never before seen such huge, sprawling skies. "We always joke that out here, we couldn't make a bad image," Winslow said. "It was so beautiful." 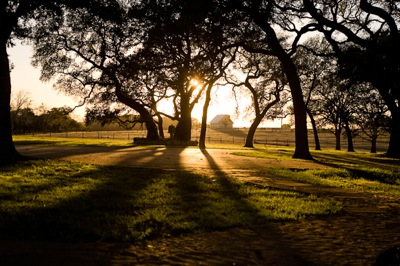 This sunset in Gayhill, Tex., was one of many moments that Winslow captured on his 11,000-mile journey. "I had just gotten off the phone with my family and found out my grandpa had passed away," he said. "I didn't really know what to do, other than make an image. So I walked outside and took this photo." 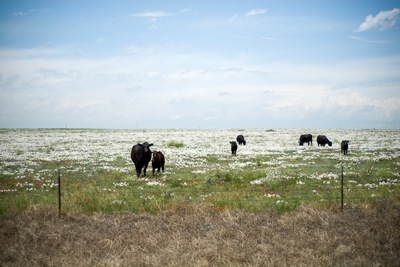 Wildflowers blanketed a pasture in Sterling, Colo. The owner of the ranch said the bloom was the biggest he had seen in 20 years. "It was a special moment," Winslow said. "We were in the back country, off the main highways, and seeing these flowers that only last for a couple of weeks was fascinating and fun." 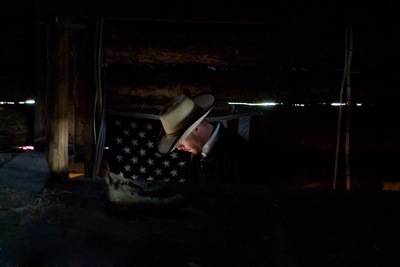 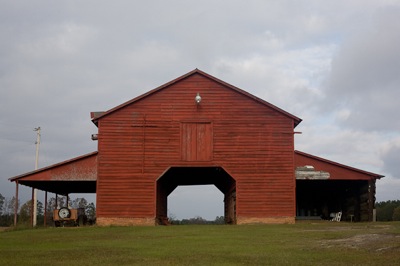 This barn in Berkeley, S.C., struck Winslow and McCarthy as beautiful. The cross fixed to the building's left side showed how devoted people in the area were to their faith, Winslow said. "Even though it's understated, it's still there," he said. "Religion is pretty much in every aspect of their life." 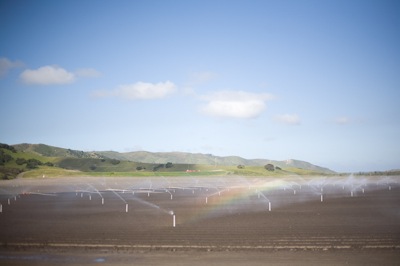 Sprinklers bring life to farmland in San Louis Obispo, Calif. As Winslow and McCarthy traveled, they discovered that water and irrigation were major concerns for communities across America. To document the issue, the partners got into the habit of photographing different irrigation systems. 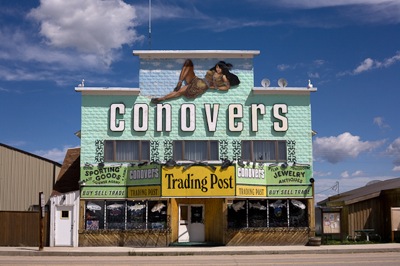 This shop in Wisdom, Mont., where Winslow and McCarthy stopped for breakfast was, literally, a blast. "This was the only store in town, and they had everything you could possibly need," Winslow said. "Outside, there's giant speakers attached to it blasting country music into empty, sleepy streets." 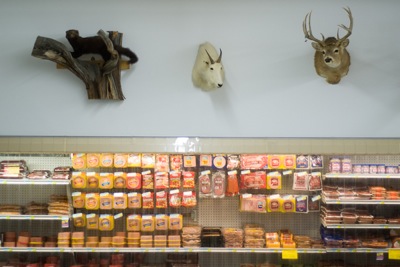 This grocery store in Saratoga, Wyo., was one of many out west where Winslow saw mounted animals. Taxidermy was also popular in restaurants, cafes and other small establishments whose owners were hunters, Winslow said. When 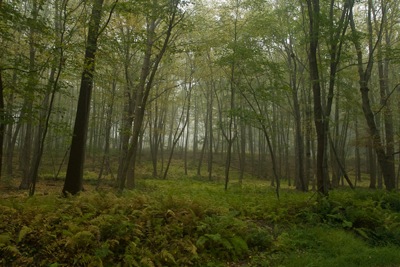 The Delaware Water Gap in New Jersey was one of many beautiful places the two would never have discovered had they not set out to see America. "When we tell people about this area, people are shocked that it's in New Jersey," he said. "It's this gorgeous preserve in a state that's not really known for parks." 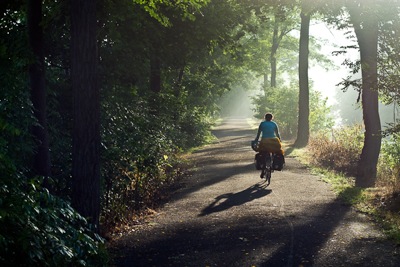 Winslow took this photo of McCarthy on the last trail they rode before ending their journey at Winslow's family farm in Saratoga, N.Y. In their final days on the road, the two talked about all they had seen and discovered. They marveled at how far they had come—and began to think about what they would do next.

Check out a map depicting Winslow and McCarthy’s route around the United States. Starting in the Northeast, they headed south to Florida and west to California. From there, they made their way up the Pacific Coast and stopped in Washington State and Oregon before turning back east.

Up Next: The Geography of Youth:

Winslow and McCarthy are embarking on a second adventure: “The Geography of Youth.” Departing from Fairbanks, Alaska this July, the two will ride their bicycles for 30,000-plus miles through more than 50 countries. Along the way, they’ll use photography, video, audio and writing to produce “digital postcards” documenting the lives of 20-somethings all over the world. Like Project Tandem, the Geography of Youth is supported by corporate donations and grants. Sponsors include the Maine Arts Commission, Think Conservatory, Waterford Precision Bicycles and other companies.

As documentary photographers, Winslow and McCarthy operate under the umbrella title “Restless Collective.” Learn about their work and connect with them online.