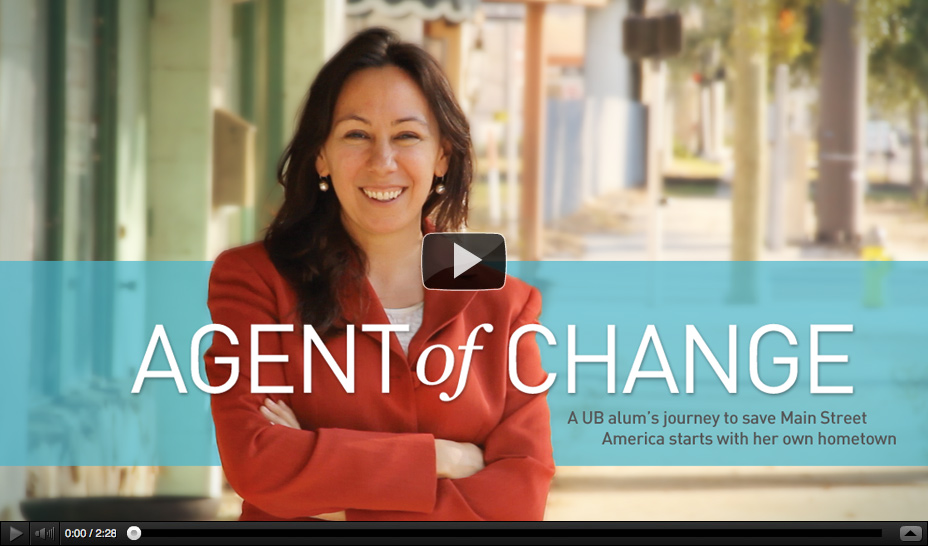 ﻿Amy Kedron will be the first to tell you: No matter where she lives, she will always be from Buffalo.

After graduating from UB in 1998, Kedron left her hometown to earn two master’s degrees at Columbia University. Like other post-industrial cities in what’s known as the “Rust Belt,” Buffalo at that time was suffering from decades of economic decay and depopulation as manufacturing jobs disappeared and familiar storefronts shut their doors.

Then, in 2003, Kedron returned home and discovered a paradox. Buffalo was in a state of economic crisis—but not everywhere. She clearly remembers Elmwood Avenue, a popular shopping strip that runs down the center of town, bustling with new retail, housing and social activity.

Kedron realized that Elmwood’s success was largely due to the presence of so many locally owned businesses in the area, from independent bookstores to mom-and-pop restaurants.

Seeing her hometown in a new light, Kedron went on to launch an award-winning nonprofit organization called Buffalo First, which is helping Buffalo redefine its economy and culture. At the same time, she completed two graduate degrees at UB, capping a unique educational journey to explore the “Rust Belt revival.”

As a UB undergraduate, Kedron spent a semester interning at the National Center for Economic and Security Alternatives (NCESA), an independent think tank in Washington, D.C. It was there that she discovered the importance of localism, or the role that locally owned businesses play in strengthening their communities. At the NCESA, Kedron studied this and other sustainable economic models, such as cooperatives and worker-owned businesses.

She also learned about the local economic multiplier, or how many times a dollar is respent in an area. Recent studies, she says, demonstrate that shopping at a locally owned and operated business can keep up to four times more money in a community versus shopping at a chain.

In recent decades, Kedron adds, Rust Belt cities had grown so poor that national retailers and restaurants avoided investing in them, choosing more lucrative markets instead. But she realized that not having these glitzy shopping districts was actually good for Buffalo, because many of its long-established Main Streets were left intact and full of local businesses.

After returning to Buffalo from New York City, Kedron dedicated herself to “social entrepreneurship,” or the use of business principles to advance social change. She enrolled in a joint degree program through the UB Law School and the American Studies program, part of the Department of Transnational Studies in the College of Arts and Sciences.

In 2006, while still a law student and a doctoral candidate, Kedron launched Buffalo First, an organization that advocates for economic, social and environmental sustainability in Buffalo’s business practices.

Buffalo First is an affiliate of the Business Alliance for Local Living Economies (BALLE), a fast-growing, national network representing 30,000 independent businesses across the U.S. and Canada. Now serving more than 175 business members, Buffalo First is supported by hundreds more individuals and groups in Buffalo Niagara. Among its many consumer-outreach programs are popular “buy local” holiday campaigns to encourage Western New Yorkers to shop at independent retailers. It also conducts policy research and lobbies at the local and state levels.

Meanwhile, Buffalo First has joined forces with other grassroots organizations in the area, transforming Buffalo into a national model of localism.

More degree for the money

Many UB graduate students choose to pursue both a law degree and a PhD or master’s degree simultaneously. Why? There are several advantages.

> Broadens your understanding of the functions of law in society through different disciplines and academic perspectives, including social work, business, economics, public health and more

When she began her graduate work, Kedron knew that localism was a relatively new concept for scholars and for consumers, but she says there were many “unique opportunities” at UB to connect her interests in Buffalo’s economy with her academic research.

Having already customized an undergraduate degree in critical race theory and feminist theory, Kedron wasn’t afraid to experiment at the graduate level. As she puts it, “UB has been flexible enough to let me try.”

“This project is about praxis: putting academic theory to work at the community level,” Kedron says.

“Much of the social sciences examine people’s relationship to power; this is the essence of localism,” she continues. “When people support businesses, organizations and institutions owned by people in their communities, they are choosing to put power in the hands of their neighbors, not a distant owner, CEO or shareholder. Localism gives communities control, and this issue of control is a timeless topic.”

As part of her American studies fieldwork, Kedron observed nearly 400 proprietors from Buffalo’s ethnically and economically diverse business districts. From there, she narrowed the group to 40 merchants and spent the next two years interviewing them.

These individuals were selected for their leadership in the community, their business’s cultural impact and their commitment to ethical and sustainable business practices, including using local suppliers, recycling or using renewable energy, and paying living wages. BALLE and other progressive business organizations call this philosophy the “triple bottom line”: people, planet and profit.

“When people support businesses, organizations and institutions owned by people in their communities, they are choosing to put power in the hands of their neighbors, not a distant owner, CEO or shareholder. Localism gives communities control, and this issue of control is a timeless topic.”

Several Buffalo First members talk about why localism is important to their community as well as to their triple bottom line.

Outside class, Kedron spent most of her waking moments advocating for her fellow students and for the Buffalo business community.

As an undergrad, she served as vice president and treasurer for UB’s student-run, student services nonprofit, Sub-Board I Inc., which helped hone her leadership skills and feed her entrepreneurial streak.

Later on, she was a founding board member for Buffalo’s Partnership for Public Good, a progressive think tank that helps facilitate community-based research, policy development and citizen engagement campaigns.

In 2009, Kedron also testified on retail diversity and sustainability at a special hearing of the New York State Senate and Assembly, which led to statewide legislation in 2011 to create benefit corporations. A new kind of socially responsible company, benefit corporations are legally bound to the triple bottom line.

Kedron’s community work has been informed and supported by her academic experiences. Without several graduate fellowships, most from the law school, Kedron stresses that she would never have been able to launch the nonprofit. Among these were awards that covered her tuition and sustained a summer research internship, as well as a dissertation fellowship from the Baldy Center for Law and Social Policy.

Kedron also credits her time as a student attorney at UB Law’s Community Economic Advocacy Clinic, where she learned how to file Buffalo First’s legal paperwork. The clinic specializes in community economic development.

“I would never have been able to create a project like this anywhere else but UB,” she says.

In May 2012, Kedron was invited to be a moderator and speaker at BALLE’s annual business conference in Grand Rapids, Mich., where she discussed ways to bring sustainable business development to underserved communities.

“During the slideshow I gave about Buffalo, I was close to tears talking about how my hometown stepped up and turned itself around,” she says.

BALLE plans to hold its 2013 conference in Buffalo, bringing more than 700 social entrepreneurs, independent business leaders and investors to Western New York. In addition to ideas and momentum, the conference will pump hundreds of thousands of dollars into the local economy.

For Kedron, now living in Florida as she finishes her doctoral dissertation, this national recognition is proof that her academic work is making an impact. After defending her dissertation in the spring of 2013, she hopes to publish it as one of the first books examining localism at the academic level. Her dream job would be to run a clinic similar to the ones she encountered at UB, “where I would teach students how to craft and implement policies that create more progressive communities.”

Place and ownership matter, she says, and that’s what localism seeks to celebrate.

UB Law’s flexible curriculum and well-regarded clinics help second- and third-year law students collaborate with skilled faculty and top attorneys. The school also makes it easy to apply your research and classroom experience to making a difference for real-world clients. Our clinical programs are bolstered by research centers like the Baldy Center for Law and Social Policy, which serves as a hub for the school’s interdisciplinary activities.

Learn about how to become an agent of change in your community.

> Partnership for the Public Good