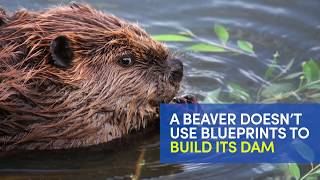 Share This Print
Download a photo of beaver-inspired autonomous robots
Download an overhead view of beaver-inspired autonomous robots
“When a beaver builds a dam, it’s not following a blueprint. Instead, it’s reacting to moving water. It’s trying to stop the water from flowing. ”
Nils Napp, assistant professor
Department of Computer Science and Engineering

BUFFALO, N.Y. — Autonomous robots excel in factories and other manmade spaces, but they struggle with the randomness of nature.

To help these machines overcome uneven terrain and other obstacles, University at Buffalo researchers have turned to beavers, termites and other animals that build structures in response to simple environmental cues, as opposed to following predetermined plans.

“When a beaver builds a dam, it’s not following a blueprint. Instead, it’s reacting to moving water. It’s trying to stop the water from flowing,” says Nils Napp, PhD, assistant professor of computer science and engineering in UB’s School of Engineering and Applied Sciences. “We’re developing a system for autonomous robots to behave similarly. The robot continuously monitors and modifies its terrain to make it more mobile.”

The work is described in a study to be presented this week at the Robots: Science and Systems conference. The work could have implications in search-and-rescue operations, planetary exploration for Mars rover-style vehicles and other areas.

It’s all about math

While the project involves animals and robots, its main focus is math: specifically, developing new algorithms — the sets of rules that self-governing machines need to make sense of their environment and solve problems.

Creating algorithms for an autonomous robot in a controlled environment, such as an automotive plant, is relatively straightforward. But it’s much more difficult to accomplish in the wild, where spaces are unpredictable and have more complex patterns, Napp says.

To address the issue, he is studying stigmergy, a biological phenomenon that has been used to explain everything from the behavior of termites and beavers to the popularity of Wikipedia.

According to stigmergy, the complex nests that termites build are not the result of well-defined plans or deep communication. Instead, it’s a type of indirect coordination. Initially, a termite will deposit a pheromone-laced ball of mud in a random spot. Other termites, attracted to the pheromones, are more likely to drop their mudballs at the same spot. The behavior ultimately leads to large termite nests.

Researchers have compared this behavior to Wikipedia and other online collective projects. For example, one user creates a page in the online encyclopedia. Another user will modify it with additional information. The process continues indefinitely, with users building more complex pages.

Using off-the-shelf components, Napp and his students outfitted a mini-rover vehicle with a camera, custom software and a robotic arm to lift and deposit objects.

They then created uneven terrain — randomly placed rocks, bricks and broken bits of concrete — to simulate an environment after a disaster such as a tornado or earthquake. The team also places hand-sized bean bags of different sizes around the simulated disaster area.

Researchers then activate the robot, which uses the algorithms Napp developed to continuously monitor and scan its environment. It picks up bean bags and deposits them in holes and gaps in between the rock, brick and concrete. Eventually the bags form a ramp, which allows the robot to overcome the obstacles and reach its target location, a flat platform.

“In this case, it’s like a beaver using nearby materials to build with. The robot takes its cues from its surroundings, and it will keep modifying its environment until it has created a ramp,” Napp says. “That means it can fix mistakes and react to disturbances; for example pesky researchers messing up half-built ramps, just like beavers that fix leaks in their dams.”

In 10 tests, the robot moved anywhere from 33 to 170 bags, each time creating a ramp which allowed it reach its target location.

“Just like an animal, the robot can operate completely by itself, and react to and change its surroundings to suit its needs,” Napp said.