The image, above, shows how the new vaccine under development works. The circles represent strains of Streptococcus pneumoniae, the bacteria that causes pneumonia. The left side of the image shows the immune system attacking bacteria before it colonizes the body. The middle section shows forms of S. pneumoniae not covered by current immunizations settling in the body. The right portion shows the new vaccine attacking those bacteria only after they become problematic. Credit: Jones et al., Sci. Adv. 2017;3: e1701797.

Download an image representing how the new vaccine under development works

“We’ve made tremendous progress fighting the spread of pneumonia, especially among children. But if we’re ever going to rid ourselves of the disease, we need to create smarter and more cost-effective vaccines. ”
Blaine Pfeifer, associate professor
Department of Chemical and Biological Engineering 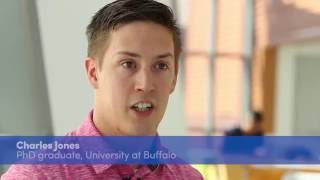 BUFFALO, N.Y. — In 2004, pneumonia killed more than 2 million children worldwide, according to the World Health Organization. By 2015, the number was less than 1 million.

Better access to antibiotics and improved nutrition account for part of the decline. But scientists say it’s mostly due to vaccines introduced in the early 2000s that target up to 23 of the most deadly forms of the bacterium that causes pneumonia, Streptococcus pneumoniae.

Now, a new vaccine under development could deal another blow to the disease, lowering the number of deaths even further by targeting dozens of additional strains of S. pneumoniae, and anticipating future versions of the bacteria responsible for the disease.

The vaccine provoked an immune response to 72 forms of S. pneumoniae — including the 23 mentioned above — in lab tests on animals, according to new research published today (Oct. 20, 2017) in the journal Science Advances. The study represents the “most comprehensive” coverage of pneumococcal disease to date, researchers say.

“We’ve made tremendous progress fighting the spread of pneumonia, especially among children. But if we’re ever going to rid ourselves of the disease, we need to create smarter and more cost-effective vaccines,” says Blaine Pfeifer, PhD, associate professor of chemical and biological engineering at the University at Buffalo’s School of Engineering and Applied Sciences, and the study’s co-lead author.

The limitation of existing vaccines

Each strain of S. pneumoniae contains unique polysaccharides. Vaccines such as Prevnar 13 and Synflorix connect these sugars — by the sharing of an electron — to a protein called CRM197. The process, known as a covalent bond, creates a potent vaccine that prompts the body to find and destroy bacteria before it colonizes the body.

While effective, creating covalent bonds for each strain of S. pneumoniae is time-consuming and expensive. Plus, this type of immunization, known as a conjugate vaccine, prompts the body to eliminate each of the targeted bacteria types — regardless of whether the bacteria is idyll or attacking the body.

Another vaccine, Pneumovax 23, contains sugars of 23 of the most common types S. pneumoniae. However, the immune response it provokes is not as strong as Prevnar because the sugars are not covalently linked.

“Traditional vaccines completely remove bacteria from the body. But we now know that bacteria — and in a larger sense, the microbiome — are beneficial to maintaining good health, says Charles H. Jones, the study’s other co-lead author.

“What’s really exciting is that we now have the ability — with the vaccine we’re developing — to watch over bacteria and attack it only if it breaks away from the colony to cause an illness. That’s important because if we leave the harmless bacteria in place, it prevents other harmful bacteria from filling that space.”

Jones, who earned a PhD while working in Pfeifer’s lab, has formed a company, Abcombi Biosciences, to bring the vaccine and other pharmaceutical products to market. The company is part of the START-UP NY economic development program, was a finalist for the 43North business plan competition in 2016 and has received seed funding and other support from UB.

How the new vaccine works

Varieties of S. pneumoniae not covered by current immunizations are responsible for a small portion — for example, 7 to 10 percent among U.S. children, according to the Centers for Disease Control and Prevention — of pneumonia, meningitis and other cases of pneumococcal disease.

The new vaccine provokes a strong immune response (comparable to Prevnar) and is engineered in a way that makes it easy to add sugars (like Pneumovax) for a broad immune response.

Key to the technology is a liposome — a tiny liquid-filled bubble made of fat — that acts as a storage tank for the sugars. Because the sugars are not covalently bonded, it’s possible that the liposome could host all of the sugars that identify individual strains of S. pneumoniae.

The research team added proteins at the surface of the liposome (also non-covalently) which, together with the sugars, provoke strong immunotherapy. According to tests performed on mice and rabbits, the new vaccine stimulated an immune response to 72 of the more than 90 known strains of S. pneumoniae. In many cases, it outperformed Prevnar and Pneumovax.

“The advantage of our approach is that we don’t have to apply the more complex covalent chemistry that is required for Prevnar,” Pfeifer says. “As a result, we can extend beyond the 13 types of sugars, potentially providing universal coverage against bacteria that causes pneumonia, meningitis, sepsis and other types of pneumococcal disease.

“It holds the promise of saving hundreds of thousands of lives each year.”

The research was supported with funding from the National Institutes of Health and by UB’s Arthur A. Schomburg Fellowship Program.