Procedure is safe but does not improve MS outcomes, a finding that the UB investigators call “surprising and unexpected”

Share This Print
“Our strong recommendation to patients and to practitioners, who have been seeking betterment for their disease and a cure for MS is that they should instead consider enrolling in trials, rather than undergoing these procedures. ”
Adnan Siddiqui, MD, associate professor of neurosurgery
UB School of Medicine and Biomedical Sciences 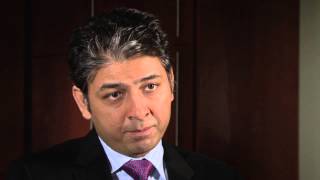 BUFFALO, N.Y. – The first controlled clinical trial to test the safety and efficacy of interventional endovascular therapy on the symptoms and progression of multiple sclerosis has found that the intervention, sometimes called the “liberation treatment,” which has attracted intense interest in the global MS community, does not improve patient outcomes. In a few cases, the treatment made symptoms worse.

University at Buffalo researchers will present their results in an “Emerging Science” poster session March 20 at the annual American Academy of Neurology meeting in San Diego. They discuss the findings in this video: http://youtu.be/94gLM4QlU_A.

The Prospective Randomized Endovascular Therapy in MS (PREMiSe) trial is believed to be the first prospective randomized double-blinded, controlled study of balloon angioplasty for MS being performed with Institutional Review Board approval in a rigorous fashion in the U.S. with significant safeguards in place to ensure careful determination of risks and benefits. All screening, diagnostic, interventional and follow-up procedures and visits were performed at no cost to the patients.

The study’s key findings are that while the treatment is safe and was not associated with serious adverse events, it did not provide sustained improvement in MS patients.

Based on their findings, the UB researchers’ primary message to MS patients and their doctors is that endovascular treatment for chronic cerebrospinal venous insufficiency (CCSVI) should only be done in the context of randomized, double-blinded, controlled studies like PREMiSe.

“Our strong recommendation to patients and to practitioners, who have, in earnest, been seeking betterment for their disease and a cure for MS is that they should instead consider enrolling in trials, rather than undergoing these procedures on a fee-for-service basis,” said Adnan Siddiqui, MD, associate professor of neurosurgery, UB School of Medicine and Biomedical Sciences and PREMiSe principal investigator.

Since 2009, approximately 30,000 MS patients worldwide have undergone the endovascular procedure that opens blockages in veins that drain blood from the brain. The vast majority of these procedures were done on a fee-for-service basis, and not as part of clinical trials.

The researchers at the UB School of Medicine and Biomedical Sciences were “uniquely situated” to study this important question, Siddiqui said. “Here at UB, some of the world’s leaders in stroke intervention, in the Department of Neurosurgery, are located right next door to some of the world leaders in multiple sclerosis in the UB Department of Neurology and in imaging at the Buffalo Neuroimaging Analysis Center (BNAC),” he said.

Researchers at UB’s BNAC have published or presented more than 25 studies on CCSVI and its relationship to neurological diseases including MS.

“Our findings over the last three years have indicated that CCSVI is more prevalent in MS patients than in healthy controls but the cause or consequence of these venous abnormalities has not been established,” said Robert Zivadinov, MD, PhD, FAAN, UB professor of neurology, director of the BNAC and co-principal investigator on the study.

The endovascular intervention is based on the hypothesis that the narrowing in the large veins in the neck and chest might cause improper drainage of blood from the brain, resulting in eventual injury to brain tissue, Zivadinov explained. It was thought that angioplasty -- treatment commonly used by cardiologists and other endovascular surgeons to treat atherosclerosis -- may remedy the blockages.

“The whole idea of PREMiSe was to find out if opening up the veins that drain blood from the brain and the spinal cord would improve outcomes for MS patients,” said Bianca Weinstock-Guttman, MD, UB professor of neurology and director of UB’s MS Center.

“What we found was rather surprising and unexpected,” Siddiqui said. “It was quite the opposite of what we originally expected to find. The study showed that endovascular treatment of stenosed veins had no effect in MS patients.”

A total of 30 MS patients, most of whom were from Western New York, were studied in the PREMiSe trial. Phase 1 was a safety trial, involving 10 MS patients and Phase II involved a total of 20 MS patients, who were randomized to receive treatment or placebo.

The UB researchers found no difference in clinical symptoms, brain lesions as determined on MRIs or quality of life outcomes between MS patients who underwent balloon angioplasty to correct CCSVI and those who did not receive the treatment.

The researchers stressed that the UB study was small and that larger studies should be undertaken and should be conducted in a rigorous fashion with IRB approval, as was PREMiSe.

“This is not the last word on this endovascular treatment for MS,” Siddiqui concluded. “This is the first word because this was the first double-blinded, randomized sham-controlled trial on the subject. However, these findings lead us to caution strongly against the general acceptance of this invasive procedure for MS patients.”

The study was funded by Kaleida Health, UB, the Direct MS Foundation (Canada), Volcano Corp, ev3 Corp and many individuals who have a personal stake in MS research.