"Anyone older than 60 is automatically at higher risk for AF," says UB chair of medicine Anne B. Curtis. 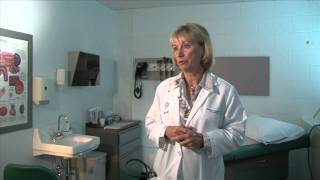 Anne B. Curtis discusses some of these medications and their pros and cons for AF patients.

BUFFALO, N.Y. -- A cardiac condition called atrial fibrillation, the most common cardiac arrhythmia, can increase your risk of stroke by 500 percent. That's why Anne B. Curtis, MD, Charles and Mary Bauer Professor and Chair of the University at Buffalo Department of Medicine, is helping to raise public awareness of the condition during September through the Heart Rhythm Society's AF Awareness Month.

Curtis, a past president of the society, is the national campaign's Buffalo area spokesperson.

"Atrial fibrillation is a rapid and irregular heart rhythm that can cause the heart to beat erratically, sometimes as fast as 200 beats per minute," she explains. "It's the most common heart arrhythmia but, unfortunately, most people know very little about it."

There are more than 2 million people in the U.S. who live with AF, and approximately 160,000 new cases are diagnosed each year.

Because AF can increase the risk of stroke by 500 percent -- an enormous increase, Curtis says -- it's critical to know if you have it or are at risk for it.

Curtis says that many patients end up being diagnosed with AF when they visit their doctors complaining of palpitations, shortness of breath, fatigue or exercise intolerance.

"But some patients have AF and don't have any symptoms," Curtis says, "which is why it's critical to know who is at higher risk for it. For one thing, AF becomes more common as we get older. Anyone older than 60 years of age is automatically at higher risk for developing AF."

Curtis suggests that anyone who has one of these conditions should discuss atrial fibrillation with their physician to see if an electrocardiogram should be performed.

Once a diagnosis of AF is confirmed with an electrocardiogram, the patient can be treated with medications, which prevent stroke, slow the heart rate and keep the rhythm normal. She discusses some of these medications and their pros and cons for AF patients at http://www.youtube.com/watch?v=MGYemuenqtE.

In addition to warfarin, the well-established anti-stroke medication that requires blood testing to adjust the dose, Curtis says that patients now have another alternative, the anticoagulant, dabigatran, for prevention of stroke in certain patients with AF. Additional medications are now being tested, Curtis says, which may soon provide patients with additional options.

Patients with recurring bouts of AF also can be treated with catheter ablation, a procedure that involves threading catheters up into the heart to the locations, usually in the pulmonary veins, where the atrial fibrillation impulses start, Curtis says.

"We can burn around the openings of those veins and that prevents those impulses from getting into the heart and triggering AF," she says.

This procedure can prevent further episodes of AF in certain patients, while in others, it acts as more of a way to help manage the condition. Patients may be less symptomatic or have better rhythm control with drugs that didn't work previously.

Curtis is a key contributor to the guidelines on AF that are issued periodically by the American College of Cardiology Foundation/American Heart Association Task Force on Practice Guidelines. Her contributions, along with those of her colleagues, provide health-care providers with recommendations based on the most current research findings so that they can make the best treatment decisions for their patients.