“In venoms, nature has created a huge pharmacy of substances that block certain receptors and activate others.” 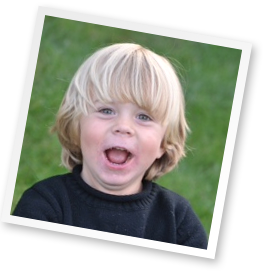 He was, by appearance, a healthy boy. He had a brilliant smile, striking blonde hair and eyes the color of the sea. He was fast becoming enamored with the stuff of boyhood: cars, sports and, especially, pirate ships.

But something wasn't right.

JB wasn't rolling over properly. He didn't crawl like other kids. Worried, his parents consulted with doctors and came home with painful news: Their son had Duchenne muscular dystrophy, a genetic disorder that causes a child's muscles to waste away.

The disease afflicts primarily boys, and the symptoms are chilling. Most victims are in wheelchairs by the time they're 12. Later, the heart and diaphragm deteriorate, making it difficult to breathe. Few patients survive beyond their 30s.

JB's story, however, is actually one of hope. Faced with a devastating diagnosis, his family joined the ranks of advocates hunting for treatments—for a way to save JB’s life.

In 2009, his grandfather, Jeff Harvey, founded a small pharmaceuticals firm with University at Buffalo scientists to develop a drug the researchers discovered in a peculiar place: the venom of a South American desert spider.

A Grandfather's Fight Against Muscular Dystrophy

Jeff Harvey is co-founder of Tonus Therapeutics, a University at Buffalo spinoff company that is testing a promising treatment for Duchenne muscular dystrophy, a fatal disease his grandson has. The treatment is derived from a protein that UB scientists found in the venom of a South American spider.

The researchers call her Rosie II—the large, furry spider in their laboratory terrarium.

She has a silvery coat, eight hairy legs and a blush-tinged carapace. When she stretches out, she covers the surface of a human palm. Her species, Grammostola spatulata, is commonly known as the Chilean rose tarantula.

Frederick Sachs, a professor of physiology and biophysics, first purchased a spider of Rosie’s kind—the original Rosie—as a laboratory pet some 20 years ago.

The critter was a mascot of sorts for his research team, which was investigating the effect of venoms on important cellular structures called mechanosensitive ion channels.

These channels, which Sachs co-discovered in 1983, are tiny tunnels that connect the inside of a cell with the outside world. Normally, the tunnels are closed. But when a cell is stretched or contorted, the tunnels open and let calcium and other substances into the cell.

This is exactly what happens in muscular dystrophy: Due to a defective gene, patients are missing a reinforcing protein that helps muscle cells keep their shape. This causes the cells to buckle, prompting the ion channels to open and calcium to flood in. The end result of this chain reaction is that the body “starts digesting your muscle from inside out,” said Sachs, a SUNY Distinguished Professor.

He and his colleagues figured that if they could find a way to close the channels, they could suppress the symptoms of an array of diseases involving these channels, including muscular dystrophy and atrial fibrillation.

That’s where venoms came in.

Sachs thought that venoms, which are very complex in their chemical makeup, might contain molecular compounds that could block the ion channels. To test this theory, Sachs hired Tom Suchyna, a recent UB PhD graduate, to screen the venoms of centipedes, scorpions and spiders.

“There were no drugs for the mechanosensitive channels, so what you do is you go out to look for one,” Sachs said.

The most promising hit came, as fate would have it, from the same species of spider that the researchers had adopted as a pet. In the venom of the Chilean rose tarantula, the team discovered a protein that kept the ion channels shut.

Excited, the scientists published their findings.

Sachs called pharmaceutical companies to see if any were interested in developing the protein into a drug. Several firms invited him to present his research group’s work. Years passed, however, and none of the businesses followed through with funding. 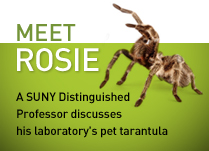 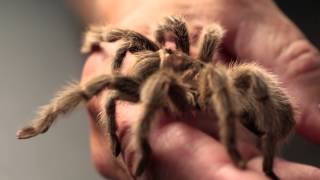 Support UB research on muscular dystrophy by making a gift online to the lab of SUNY Distinguished Professor Frederick Sachs, who is testing a treatment for the disease.

Investors interested in the treatment can contact Tonus Therapeutics, a company that Sachs co-founded. The therapy is patented and has orphan drug designation from the U.S. Food and Drug Administration.

Groups that have supported Tonus Therapeutics’ research and development and commercialization efforts include the Children’s Guild Foundation and the UB Center for Advanced Biomedical and Bioengineering Technology (UB CAT) in UB's New York State Center of Excellence in Bioinformatics and Life Sciences.

“No one in their right mind would give spider spit to a kid with dystrophy. It's only through the basic science that you can end up here. … If you keep your eyes open, you see things you would never have looked for.”

Pictured left to right: Sachs and UB colleagues Tom Suchyna and Philip Gottlieb, who are developing a treatment for muscular dystrophy.

In a Moment of Serendipity, a Company is Born

By 2009, Sachs had begun to give up hope of moving the therapy forward. Then, that summer, he got a call from JB’s grandfather, Jeff Harvey, relaying JB’s story.

Harvey, a stockbroker from Williamsville, said he was looking to invest in promising treatments for muscular dystrophy. He had discovered Sachs, in a moment of serendipity, through a Google search.

“I didn’t know what to make of it at first,” Sachs remembers. “We had lunch together, and I explained the history of my attempts to get big pharma interested. In my discussions with Jeff, it seemed like maybe what we should do is make a biotech company and then try to raise funds to take care of what big pharma wouldn’t do.”

“I have an image in my head of a boy standing up out of a wheelchair and walking away,” Sachs said. “It’s a little fanciful, probably, but that’s the image I have. As I get older, I would feel really good to have helped some kids.”

Within months, the men launched a firm with Sachs as president and Harvey as chief financial officer. Suchyna, now a research assistant professor at UB, and Philip Gottlieb, a research associate professor who has worked with Sachs for many years, signed on as vice presidents.

Suchyna said that while mechanosensitive ion channels aren’t a well-known drug target in the pharmaceuticals industry, blocking these channels is actually an elegant technique for treating muscular dystrophy. Alternatives involving stem cell treatments have unpredictable side effects, and genetic therapies address DNA defects that may not be universal among patients.

Today, the UB researchers’ company, Tonus Therapeutics, is testing the protein therapy in dystrophic mice. Initial experiments found that the animals gained strength and suffered no toxic reactions while on the drug for more than 40 days.

The protein used in studies is synthesized in the lab, and is a mirror image of the original tarantula protein, a change that improves the drug’s effectiveness.

The therapy is not a cure. But if it works in humans, it could extend the lives of children like JB for years—maybe even decades.

JB, now 4, can’t walk down the stairs alone. When he runs, he waddles. He receives physical therapy and takes steroids as a treatment. While playing tee ball one recent day, he confided to his grandfather, “When I grow up, I want to be a baseball player.”

It was a heartbreaking moment.

“Oh, I would be thrilled if you could be a baseball player,” Harvey remembers replying. He’s doing everything he can to make sure that JB—and other boys like him—can live out their dreams.

At UB, ideas don’t just stay in the laboratory. Student and faculty inventors have access to many resources that help bring research discoveries into the real world.

GsMTx4, a peptide that UB scientists found in spider venom, is just one example of a UB discovery that was patented and is being licensed through STOR. UB researchers are testing the peptide as a therapy for muscular dystrophy.

Study Physiology and Biophysics at UB

Students in the Department of Physiology and Biophysics in UB's School of Medicine and Biomedical Sciences study the function of biological systems, from single cells to the entire human body.