Cult style icon Tziporah Salamon is her own greatest creation 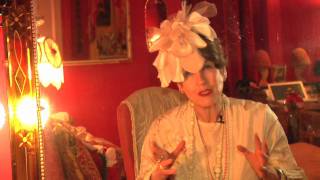 It’s a casual day for Tziporah Salamon (BA ’72): chic black-and-white striped Comme des Garçons top; vintage high-waisted black pants, tapered at the ankle; mismatched polka dot socks; vibrant red lips. It’s her Pierrot look, she explains, and perfect for a winter evening spent in her Upper West Side apartment, walking a visitor through her seemingly endless collection of antique clothes. As she darts around the room, moving between towers of hatboxes—she owns more than 200 hats—and tossing intricately embroidered garments on a daybed, she pauses to look down at her ensemble. “One of my great looks,” she says. “The clown.”

That confidence—and the care that she puts into each of her sartorial creations, some of which can take years to complete—has made Tziporah Salamon, “Tzippy” to her friends, a cult style icon. At 64, she appears regularly in Bill Cunningham’s On the Street column for The New York Times and in various street-style blogs, often with her turquoise Milano Bianchi bicycle, her primary means of getting around town. She has served as a muse for Diane von Furstenberg and Ralph Lauren, modeled for Lanvin and Australian Vogue, and co-starred in Ari Seth Cohen’s 2014 documentary, “Advanced Style.” She also teaches a private seminar, The Art of Dressing, which she first offered at Parsons design school, and has a one-woman stage show that has been performed at the Dahesh Museum of Art in New York and at the Rhode Island School of Design.

Yet all of this recognition came relatively late in life. To pay the rent over the years, Salamon has worked dozens of jobs, from restaurant hostess to hatcheck girl. “It doesn’t matter what I do,” she says, “because what I really do is dress.”

Taking the long view, it seems that Salamon is fulfilling her destiny. Her father was a tailor (he worked in the alterations department of Bergdorf Goodman for many years), her mother a seamstress. Hungarian Jews who survived the concentration camps and moved first to Israel, then to New York, they doted on their daughter and made all her clothes. “They would measure me while I was sleeping,” Salamon says. “I had a wardrobe fit for a queen.” When Salamon left Brooklyn to attend the University at Buffalo, she arrived with a bespoke collection of silk blouses and heavy wools.

Unfortunately, this was 1968, when students were taking over the administration building and boycotting classes. Salamon quickly found that her sense of style was out of synch with the political climate. “I would come to class all dolled up, and people would say, ‘Where do you think you’re going?’” she recalls. Her roommate wore men’s clothes; Salamon, caving under pressure, experimented with dungarees. “But I still had my days of culottes and capes,” she notes. In some respects, her desire for a traditional education was also at odds with her classmates. “I was a good girl and really wanted to attend classes,” she says. “But that was very politically incorrect.” In the end, she took a limited part in the protests, while also managing to graduate with honors.

ith her English degree and a secondary teaching credential, Salamon enrolled in the graduate program in English literature at the University of California, Santa Barbara. She later switched to education, but still found herself looking for something more. “It was another beautiful day, every day,” she says. “You need ugly to appreciate beauty.”

In the mid-’70s, “turned on” by Gestalt therapy, she enrolled in a PhD program in family and marital therapy in San Rafael, but soon learned, through her fieldwork, that she had too soft a heart to be a therapist. “I was seeing couples and families, and it would kill me to say, ‘Time’s up!’” she remembers. “So I would stay with them for hours.”

She then made a radical decision: She quit. And, for the first time, she didn’t know what to do next. “This was a big crisis in my life,” she says. But she did know she loved clothes; at least twice a week, she would go to the shops on Berkeley’s Telegraph Avenue, though she couldn’t afford to buy anything. Fortunately, her mother was still making her clothing. “I was an arty hippie,” she says. “I had the best Mexican peasant blouses, with the best embroidery.”

At 29, she returned to New York with hopes of entering the fashion industry. Held back by her inability to sew—her parents, who wanted a better life for their daughter, had never taught her—Salamon nonetheless took a class at Parsons, only to leave in tears when she couldn’t operate a sewing machine. She had stints at vintage clothing boutiques and department stores. Though she was learning that she didn’t want to be a designer or buyer, she was acquiring a deep education in fashion and style.

Then she received a tremendous gift from a friend: a large collection of antique clothing that she had outgrown. “They were prime vintage,” Salamon says. “All killer pieces.” One night in November ’84, wearing a Yohji Yamamoto jumper, she happened to go to dinner at Jezebel, one of the city’s hottest restaurants at the time. It was her kind of place: piano shawls on the tables, beaded dresses hanging from the rafters. Salamon wandered into the kitchen and was spotted by the owner, who asked what she was wearing. Impressed by the answer, the owner shortly offered her a job as a waitress, with the stipulation that she wear her own clothes.

This and other odd jobs funded Salamon’s expanding wardrobe for the next 15 years. Every spare cent was funneled toward her collection. “I’d say, ‘Con Ed can wait; I have to have this,’” she recalls. She wouldn’t wear an outfit until she had acquired every necessary component—hat, jewelry, shoes—to make it perfect. Her dedication and enthusiasm won her discounts and credit. “The vendors at the antique clothing shows loved me,” she says. “They knew their pieces would be part of a work of art.”

But it wasn’t until 1999, when she attended a spiritual retreat taught by rabbis active in the Jewish Renewal movement, that her art took on a greater meaning. A rabbi praised Salamon for the creativity and energy that she put into her clothes. “I felt blessed for this gift that I had been ashamed of,” Salamon says. The experience changed the way she looked at herself. “It was a huge boost for me,” she says. “What I do—changing buttons, paying attention to every detail—it makes dressing holy. This is how I make the world a better place.”

On the cusp of 50, Tziporah Salamon had come into her own. “Instead of making myself less, I gave myself permission to be the peacock that I am,” she says. As an artist and teacher, she says, her criteria for a job “is to use my heart and wear my clothes.” This night, as she searches through those clothes, she locates her latest find, an Israeli coat bought in a thrift store in Chelsea. She studies it on the daybed. “I already have a hat with a black tassel,” she says, satisfied. That hat, of course, coordinates perfectly with the tassel on the coat. “And I already saw the right sandal. They’re Valentino, but I’ll have to get them.” As she admires the fabric, she seems, as she sometimes calls herself, like the luckiest girl in the world.

“What I do makes dressing holy. This is how I make the world a better place.”

In the 1970s, when Salamon was studying to be a therapist, she bought copies of several Matisse paintings in a shop on Telegraph Avenue in Berkeley. Perhaps not surprisingly for a woman who seems to have kept almost every item she’s ever worn, those same reproductions hang on the wall of her apartment today. This ensemble was inspired by Matisse, whose paintings Salamon still “dives into” for inspiration and meaning. “He loved textiles as much as I do,” she says.

Coat  Turkish, cotton. Late 1800s to early 1900s. “It’s very Matisse,” Salamon says. “I bought it for $60, but the lining cost $400.” She bought the fabric for the lining at Mood Fabrics, New York’s Garment District emporium. The coat was purchased in an antique store in Topanga, Calif.

Pants  Rayon. “I had them made by a tailor when I was 42.” (Yes, they still fit perfectly.) “Shadow stripes. I love shadow stripes.”

Hat  Likely made from an Indian fabric that was turned into a cloche, one of Salamon’s favorite styles of hat. 1920s.

Shawl  Silk. Approximately 15 years old. Dries Van Noten. “It was cream, but I dyed it black. I wear black a lot more than cream.” A gift.

Sandals  Silk satin. Prada. She bought them half-price for $630 two years ago, and is still paying for them. “They’re kind of like an ice-cream sandwich,” she says, referring to the layer of built-in cushioning between the platforms that adds extra height. “They go with all of my Chinese and Japanese clothes.”

Bracelet  Silver, gold and carnelian. Bought in Israel in the 1980s. “I had to pay my rent back home. It was $407. I had the money, and I was going to the post office to convert it to a money order. Across the road from the King David Hotel in Jerusalem, I saw this bracelet in the window of an antique store. The shop owner wanted $500. I said I had $400 and gave it to him. So I didn’t pay the rent that month.”

Jennifer Kitses is a freelance writer based in New York City.

What a refreshingly different and inspirational article! There are more ways to bring peace and joy in the world than seeking political office or accumulating degrees that can't be applied to life situations. Kudos to Ms. Salamon for living her joy and kudos to AtBuffalo staff for sharing her story!