Lively debates over a virtual cuppa 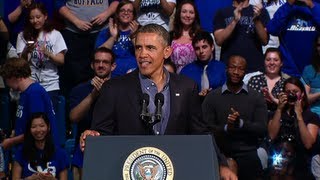 President Obama unveiled a new plan to address college affordability and student debt during a visit to the University at Buffalo on Aug. 22, 2013.

To help families deal with the soaring cost of higher education, the Obama administration is rating colleges in terms of which ones offer the best value. Cost, graduation rates, ability to repay loans and job placement after graduation are all key metrics in the new College Scorecard.

We asked two UB alumni who are presidents of higher education institutions—Robert Davies (PhD ’05) of Murray State University and Virginia Horvath (BA ’78) of SUNY Fredonia—what they see as the pros and cons of such a system.

Virginia Horvath: In principle, I think the idea of holding an institution accountable, and making sure it provides information about the educational and economic outcomes that result from attending that institution, is a good one. One of my concerns would be that it could be capturing information based on an oversimplified metric, and not really looking at the value of that education in broad terms.

Robert Davies: I think you’re absolutely right—when you’re trying to put simple metrics on a complex situation, it’s not always going to measure up. I do agree with you on accountability; especially as a public institution, we must uphold public faith and be transparent in the manner in which we work. For some students, I think the metric is a great starting point, just to maybe weed out some institutions that price too high. But even then, it’s important to consider what type of university they would like to attend. What are they expecting out of the university experience? What are the values of the institution? What are the learning outcomes?

VH: My university has a strong emphasis on arts and education, and we don’t have engineering, so many of our graduates are going into fields that don’t have high income. But they know that going in. I think that’s one of those things that could make it look as if the institution is doing something wrong, when it’s really reflecting the starting salaries of the field one chooses.

RD: We’re focusing more and more on the private benefits of a public education system. And university presidents are pretty smart people—we’ll learn how to game the system. If that’s going to be the reward mechanism, are we in fact doing what the ethos of public higher education was to start off with, to transcend socioeconomic status, to answer the big questions of the day and of the future?

VH: That public mission is really important when we think about access. All of us could say, “Let’s just have fewer students and be more selective so that their success is guaranteed.” I always wonder, what is the value added? Couldn’t those students have done well on their own? That four-year graduation rate leaves out those people who might be working more, or maybe need some support along the way, so it takes them five years instead of four. I would think an institution that gets that student to succeed has more value than one that has A-plus students coming in and being successful. But the traditional measures don’t account for that.

RD: I’m reminded of a class I had with Dr. Bruce Johnstone at the University at Buffalo, looking at the straight-A students who spend four years and come out basically having gained nothing, compared to the different kinds of students we take in at public state universities, the diversity we’re able to attract—not only diversity in terms of ethnicity, but also in terms of political thought and socioeconomic background—and our ability to really make a difference both in their lives, and in the communities they go back to. Sixty percent of our students are first-generation students. We know that over time they’ll be sending their sons and daughters to us, and really transcending and removing those socioeconomic barriers.

VH: And then there’s the point about traditional liberal arts—that’s one of the things that concerns me as well. So many students coming right out of high school may not know what career they want to go into, and they’re not necessarily training for a profession. They’re looking to be educated. When I’m talking with political leaders and others who say, “You should be producing people in these fields based on what the market needs,” I ask them what their degrees are in. Often, they’re in things like political science, history, mathematics, French. They’re across the range of liberal arts fields, and they found jobs and work as responsible citizens. But our understanding of what an education does has narrowed.

RD: The university experience is not a commodity. The scorecard does present transparency, it does address the cost issue, it does bring in the employment issue. It’s a good starting point. But I think it’s more important for students to jump off that point and say, “OK, what am I looking for, what type of institution do I want to attend, which one will allow me to achieve the goals that I want to achieve?” We need to make sure that students and their families are smart consumers.

How do you take your coffee?

Robert: Straight up.
Virginia: I take mine black as well.