UB's Colt Cotten is as comfortable around cows and Carhartt jackets as he is on the wrestling mat, where he hopes to pin down a national title this season. Photo: Douglas Levere

Share This Print
“It’s simple. That’s what I love about it. I wish everybody grew up a little country. ”
Colt Cotten

Colt Cotten could easily have been a statistic, another kid from a single-parent, low-income family who never fulfilled his potential. But something drives Cotten each day to try to be the best man he can be: the fact that his father wasn’t.

“Whenever I thought about doing something stupid, even now, I say ‘Don’t be like him,’” says Cotten, a senior wrestler whose goal is to win a national championship come March. If he succeeds, his mother, Fawn, and grandfather, Robert Yerger, will be there to congratulate him. Cotten’s father won’t have a clue. Rodney Lawrence Simpson has been in jail since shortly after Cotten was born. (Fawn gave her son the surname of an ex-husband instead of taking Simpson’s.)

Cotten has never seen or spoken to his father; nor does he plan to. All he knows about Simpson is his birthday, that he was a Golden Gloves boxing champion, and that his rap sheet is a laundry list of felonies and misdemeanors that landed him in a New Mexico state prison, where he has lived for the past 20 years. “If he ever tried to find me, I’d just—I don’t need that,” Cotten says. “I’m going to get a college degree. I’m hopefully going to be a national champion.”

Cotten was born near Spokane, Wash. Simpson split soon after and, following a year in California, Fawn moved with her son back to her native Pennsylvania. She raised Cotten on a farm in Benton, a rural town about 40 miles from where she grew up, instilling in him morals and manners; people frequently ask him what military branch he’s in.

Colt Cotten is one of four team captains this season. Photo: Paul Hokanson

Benton’s population is just under 900. Most people there work on farms or at the Benton foundry. It’s not for everyone, but Cotten says his country upbringing helped him become who he is today—as a wrestler (he has a gritty, underdog-ish style) and as a man. “No one has money.The richest guy probably makes six figures and drives a 2010 diesel. It’s simple. That’s what I love about it. I wish everybody grew up a little country.”

At age 6, he was helping his mom in the horse stables. By 8 he knew how to operate a Haybine. Cotten is as comfortable around cows and Carhartt jackets as he is on the wrestling mat. His record-setting career at tiny Benton High School, where wrestling meets draw half the town, earned him a scholarship to nearby Bloomsburg University, whose coach was John Stutzman (BA ’98). When UB hired Stutzman as head coach in 2013, Cotten decided to follow his mentor to Buffalo.

“I saw a connection before he even brought anything up about his past,” says Cotten. “He grew up without his dad, too. I look up to him like a father figure. He’s hard on me and I need that. I appreciate that.”

“We have a lot in common,” says Stutzman, who named Cotten one of four team captains this season. “I understand where he’s coming from and I won’t let him take the easy way out. He needs this as much as I did when I was a student-athlete.”

Cotten, who wrestles at 141 pounds, has a year of eligibility remaining. With a major in legal studies and a minor in environmental studies, he’s hoping to become a fish and game commissioner. For now, though, he’s focused on qualifying for the NCAA Wrestling Championships in St. Louis. He was eliminated in the consolation bracket at last year’s tournament in Madison Square Garden.

Placing No. 1 in the country in his weight class would be a great way for Cotten to close out his wrestling career. “A kid that grows up with a single mom, dad’s in jail, low-income family? If you look at the statistics, they’re supposed to amount to nothing,” he says. “I pride myself on saying I made it from the bottom. And I have my mom and my coach to thank.” 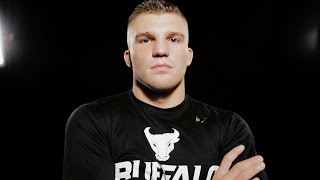 I've known Colt since he was just a little guy in cowboy boots and hat! I've watched him grow into the amazing man he is today.  I'm rooting for you all the way, Colt!  Hope to see you soon 'round "town." Love you!

I met Cole at a wrestling camp last summer where I took my grandson. He was polite and respectful.  While instructing other wrestlers in proper techniques, Cole demonstrated that he is a talented teacher as well as a great wrestler.  I would love to be able to set up some one on one instruction with my grandson.

This is a guy I'd want in a foxhole with me.He smiles easily,cares  deeply and makes those who meet him want to be his friend. I am blessed to be one of those.