Megan Burns was ambivalent about swimming. Then she came to UB and started shattering records.

No record is safe when Megan Burns is in the pool. Photo: Paul Hokanson

Megan Burns may be the best sprinter the UB swimming program has ever seen. In 2015, she was the anchor on the 200-meter free relay. At the MAC Championships that year, she was faster in her 50-meter leg than any swimmer in any leg of that event by a half-second—an eternity over that distance.

That was her freshman year.

Hard to imagine that just a few years ago, Burns, a junior nursing major, had to be practically dragged to the pool.She credits her mother with encouraging her to stick with it when she was, in her own words, “just lazy.”

“I basically hated swimming up until college,” she says. “I would cry before practice all the time, and my mom would be like, ‘No, you need to go!’”

Since coming to UB, under the tutelage of head coach Andy Bashor, she has embraced the work ethic required to be successful in a sport where getting faster is the only objective. This isn’t to say she didn’t have a learning curve. Going from a high school training regimen to a Division I program tends to present a bit of a shock to the system.

“When I got here, I bet people were questioning why I was on the team,” she says. “The amount of weights, dry-land training, how much we practice every week—it was all very different for me.”

According to Bashor, Burns’ initial difficulties weren’t that unusual for an incoming freshman, but her learning curve was.

"There are levels of progression you expect a swimmer to go through, and she skipped several of those,” he says. “Her freshman year, it seemed like every time she got in the pool, she swam faster.”

That progress culminated in a freshman-year MAC title for Burns, who won the 50-meter with a new personal best. This was a breakout moment for Burns that even she found almost baffling. “I was expecting to be fast, but I wasn’t expecting to be that fast,” she says. Nonetheless, it was a payoff that showed her she had next-level potential.

Last year, she repeated as MAC champion in the 50-meter and added a 100-meter title to her trophy case. Her time in the 50 broke a UB record held by Mallory Morrell (BA ’14), whom Burns looked up to when they were sharing lanes back at Rush-Henrietta Senior High School outside of Rochester, N.Y.

She capped off last year’s campaign representing the Bulls at the NCAAs and the Olympic trials. Though she’s proud of these accomplishments, she is not done yet.

To help her reach those lofty heights, Burns will have some familiar competition in the practice pool. Her sister, Katelyn, a freshman biomedical sciences major, has joined the team, and has said her goal is to “break her sister’s records.” 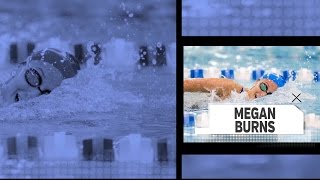