Share This Print
“The UB Libraries aims to create a James Joyce museum in historic Abbott Hall on UB’s South Campus that provides a permanent exhibition space for visitors from across the globe to experience for themselves the rare materials and the very life and history of Joyce. ”
James Maynard, curator
UB Poetry Collection

The university also announced a fundraising campaign to create a museum on the South Campus for the UB James Joyce Collection — a treasure trove of materials that Irish diplomat Ciarán Madden described at the event as the “greatest” collection of Joyce materials in the world.

“The mural that you see here is part of a broader initiative to raise awareness of the UB James Joyce Collection,” said James Maynard, curator of the UB Poetry Collection and coordinator of the UB Rare and Special Books Collection.

“The UB Libraries aims to create a James Joyce museum in historic Abbott Hall on UB’s South Campus that provides a permanent exhibition space for visitors from across the globe to experience for themselves the rare materials and the very life and history of Joyce,” he said.

Through the university’s Boldly Buffalo fundraising campaign, the museum will also support a preservation and acquisitions endowment, a James Joyce curator position, and programming and exhibition funds.

Madden, the consul general of Ireland in New York, praised the plan to make the collection, which includes Joyce’s manuscripts, personal belongings and other materials, more easily accessible to the public.

He commented on Joyce’s most famous work, “Ulysses,” widely considered a masterpiece of 20th-century literature.

“It inspires devotion like no book I’ve ever seen. When you talk to writers in Ireland and here in the U.S., and talk to them about ‘Ulysses,’ it ignites their passions. They become proselytizers for the book. They tell you their favorite bits; why they love it. They quote it at length. And they bring it to life in a way that reading it doesn’t,” Madden said.

President Satish K. Tripathi said the Joyce collection, as well as other materials acquired and preserved by the UB Libraries, play a key role in boosting UB’s reputation for educational excellence in the U.S. and abroad.

“This significant scholarly treasure enhances UB’s international reputation and impact. And both our UB Poetry Collection and our UB James Joyce Collection play a wider role in our ambition to situate UB among top 25 public research universities in the nation,” he said.

UB held a news conference on June 14 to unveil a new mural of renowned Irish author and poet James Joyce in downtown Buffalo.

President Satish K. Tripathi celebrated UB's Joyce collection and its impact on cultural tourism, and recognized the contributions of the Irish government.

Ciarán Madden, consul general of Ireland in New York, kicked off the Joyce centenary and recognized the important role of Buffalo in Irish heritage.

In addition to other memorabilia, a commemorative pint glass was available at the reception held at the Curtiss Hotel's VUE Rooftop Lounge.

The mural is located at 181 Franklin St., outside the LoTempio P.C. Law Group building in Buffalo.

Located at 181 Franklin St. — outside of the LoTempio P.C. Law Group building in Buffalo — the mural depicts Joyce in an archival photograph from the collection juxtaposed against a vibrant background of yellow, orange and pink hues.

It was designed by Kristopher Miller, UB Libraries web manager and lead designer, and installed by Rory Allen, owner of Buffalo-based ZoomCopy.com. It was funded by the Office of the Consulate General of Ireland in New York, Amherst Gaelic League and UB alumnus Alphonse Kolodziejczak. 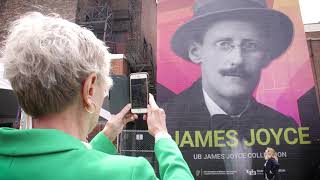 New York State Sen. Tim Kennedy applauded the mural, as well as the effort to create a Joyce museum, noting it not only celebrates Joyce but also Irish heritage in the greater Buffalo area. Like others, he thanked the LoTempio family for use of their building.

“How fitting it is that one of the best-known Italian-American families in all of Western New York is dedicating the façade of their building to one of the greatest Irishmen to ever live,” he said.

Evviva Weinraub Lajoie, vice provost for the UB libraries, noted the mural and plans for the museum arrive ahead of the 100th anniversary of “Ulysses” in 2022, which will feature a global series of Ulysses-related programming, exhibitions and events throughout the year, including on Bloomsday.

The international holiday, held on June 16 — the same day “Ulysses” takes place — remembers the enigmatic story of a day in the life of protagonist Leopold Bloom in Dublin.

“This year, in honor of the upcoming 100th anniversary of “Ulysses” in 2022, we commemorate Bloomsday,” Weinraub Lajoie said.