Workers prepare the Delta II rocket for launch. The rocket carries the ICESat-2 satellite on board. Photo: NASA/Bill Ingalls

Beata Csatho, chair of geology, at the NASA Jet Propulsion Laboratory (JPL) in California. Csatho and colleague Tony Schenk visited JPL as part of their recent trip to the West Coast, where they viewed the launch of ICESat-2. Photo: Tony Schenk

The Delta II rocket with the ICESat-2 satellite on board shortly after the mobile service tower at SLC-2 was rolled back before launch on Sept. 15. Photo: NASA/Bill Ingalls

An emblem signifies the 381st flight of the United Launch Alliance Delta family on the Delta II rocket with NASA's ICESat-2 on board. The first Delta I was launched in May 1960. A star traditionally was placed on the rocket to recognize each mission. The final Delta II boasts more than 150 stars with over 800 signatures of people who have been part of the Delta II program. Photo Credit: (NASA/Bill Ingalls)

Share This Print
“We have been preparing for the launch of ICESat-2 for many years, so of course this is a very exciting milestone. ”
Beata Csatho, professor and chair
Department of Geology 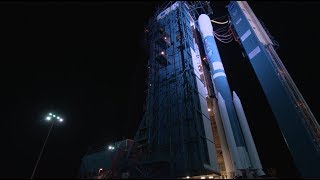 Watch the launch of the final Delta II rocket with the ICESat-2 satellite on board.

In the darkness before dawn, UB researchers Beata Csatho and Tony Schenk waited.

The crowd around them was quiet. In the distance, final preparations for the launch of NASA’s new ice-monitoring satellite neared completion.

It was 6:02 a.m., a cool morning along California’s Pacific coast.

Onlookers watched as flames licked the ground and the Delta II rocket carrying NASA’s Ice, Cloud and land Elevation Satellite-2 (ICESat-2) lifted into the air. The sky lit up. The world rumbled. The audience cheered.

Csatho, who helped plan the satellite’s scientific requirements as leader of the mission’s Science Definition Team from 2011-14, felt relief and excitement. The launch was a success.

The moment marked the start of ICESat-2’s journey into orbit, where the spacecraft will serve as a vital tool in understanding the impacts of climate change — including future sea level rise.

“I was very impressed by the very first few seconds of the start of the launch, with the huge yellow-reddish fireball,” said Schenk, research professor of geology. “And then the rocket disappeared after a few seconds into the clouds. There was nothing to be seen. But after a while, it penetrated the clouds, we could see it above the clouds, in a very different fashion, and there was still a very long trail, a kind of fire trail after the rocket that was yellowish. I was fascinated by this.”

The launch, which took place on Sept. 15 at Vandenberg Air Force Base, about an hour’s drive northwest of Santa Barbara, was Schenk and Csatho’s first. They watched from a viewing point outside of the base, nervous but excited, too.

“We have been preparing for the launch of ICESat-2 for many years, so of course this is a very exciting milestone,” said Csatho, professor and chair of the Department of Geology, in the days leading up to liftoff. “It comes at a time of critical importance. The Greenland and Antarctic ice sheets are rapidly losing ice, and we need to monitor them continuously to understand the mechanisms driving these changes, and to make better predictions about how global sea level will rise in the next few decades.”

In orbit, ICESat-2 will use laser pulses to measure the elevation of the surface of the Earth, covering the Arctic and Antarctica in detail every 91 days — data that will enable scientists to calculate the changing thickness of ice sheets, glaciers and sea ice.

Back on land, Csatho and Schenk will partner with UB colleagues — including Abani Patra, professor of mechanical and aerospace engineering and director of the Computational and Data-Enabled Science and Engineering (CDSE) program, and Prashant Shekhar, a PhD candidate in CDSE — on a series of projects tied to ICESat-2.

These range from tracking changes in the height of ice sheets to creating an early-warning system that alerts scientists about sections of the Greenland or Antarctic ice sheets that may be about to undergo significant change, such as radically accelerated melting.

“ICESat-2 really is the epitome of what we can do with remote-sensing technology today. It feels really good to know that we will now have eyes over how fast our planet is changing. I think this is a very good avenue for researchers to contribute to a very important cause,” Shekhar said.

He did not attend the launch of ICESat-2 with Csatho and Schenk, but followed it from afar, watching a video of the event soon afterward.

It was a moving moment in space history: ICESat-2 was carried into orbit aboard the United Launch Alliance’s last Delta II rocket — a storied launch vehicle that has been in use since 1989, sending notable technologies into space, such as GPS satellites and the Spirit and Opportunity rovers that landed on Mars.

On Sept. 15, as the rocket housing ICESat-2 blasted off, the commentator on NASA’s live broadcast gave this tribute to the Delta II and its final payload, heard by Shekhar and others around the world who watched live or tuned in later:

“Liftoff of the final Delta II, launching nearly three decades of science research and exploration missions, lifting ICESat-2 on a quest to explore the polar ice sheets of our constantly changing home planet.”