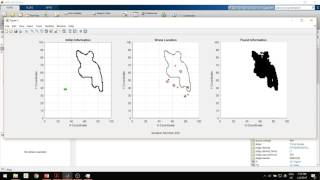 This computer simulation shows how five common drones can be programmed to work together in a swarm to map a nearly 1 kilometer-wide oil spill in nine minutes.

“Communication is the foundation of any swarm. ”
Souma Chowdhury, assistant professor
Department of Mechanical and Aerospace Engineering

Thousands of ants converge to follow the most direct path from their colony to their food and back; a swarm of inexpensive, unmanned drones quickly map an offshore oil spill.

What could these events have in common?

Each extremely complex task is accomplished by individuals following very simple rules. But in the case of the drones, a bit of nature’s magic must be captured in a mathematical formula.

“Nature may not proactively use mathematics, nor does it have foresight. It behaves in ways driven by feedback, implicit drive for adaptation and a certain degree of apparent randomness,” says Souma Chowdhury, assistant professor of mechanical and aerospace engineering, School of Engineering and Applied Sciences. “But we can look at what kind of mathematical principles define that behavior. Once we have that, we can use it to solve very complex problems.”

Chowdhury is pioneering a way to program a team of drones to quickly map an oil spill. His computational efforts, in a paper that he co-authored with Zachary Ball and Philip Odonkor, were presented recently at the American Institute of Aeronautics and Astronautics’ Science and Technology Forum. The study, titled “A Swarm-Intelligence Approach to Oil Spill Mapping using Unmanned Aerial Vehicles,” optimized and simulated a five-drone swarm that can map a nearly one-kilometer-wide spill in nine minutes.

To make that work, Chowdhury had to overcome the lack of communication bandwidth typical of a flying ad hoc network and the short battery life of off-the-shelf drones.

Following the principles partly inspired by the dynamics of a flock of birds, Chowdhury devised a method for the drones to quickly record whether they are over water, oil or the edge of the spill. In addition, the drones assume the space around the oil they have spotted is also oil, although that is recorded as less than certain. This simple information is shared with the other drones in the swarm, as opposed to sharing actual images or video, which would require too much bandwidth.

“Communication is the foundation of any swarm,” he says.

As the drones move from point to point over the spill, they avoid going over space that other drones already have covered. Thus, with five drones making observations every five seconds, the size of the spill can be determined quickly.

The drones also fly to their base, on a boat, when their batteries get low. The drones that replace them on the search already have the information from all the other drones, so they avoid previously mapped locations.

“The thematic focus of my lab is developing computational design approaches that take inspiration from nature,” Chowdhury explains.

“There is no need for human interaction during its entire mission,” he says. “That’s the big deal.”

Another big deal is the cost. Chowdhury’s approach assumes simple, affordable drones, which makes it accessible to many more people. “This task can be accomplished by off-the-shelf drones that cost under $1,000. All they need is to have a simple drone-mountable camera system and use our software,” he says.

Collision avoidance is another challenge for the swarm and here, too, Chowdhury is following nature’s simple rules. In recent work reported by the University of Queensland, researchers watched very carefully how parrots never crashed into each other. They observed through tunnel experiments that they always veer to the right, a simple rule that keeps every member of the flock safe.

Chowdhury‘s lab is exploring how using similar principles, drones can pre-emptively turn a certain angle to the right when they sense another flying member of the swarm. He is writing that in a companion paper to be submitted to another international conference later this year.

Swarming drones could be used elsewhere, such as mapping forest fires or other natural disasters. It’s possible they could be used to help locate people trapped after an earthquake by changing the type of cameras used.