Juan Aleman, a PhD candidate in the Department of Civil, Structural and Environmental Engineering, worked with faculty members Andrew Whittaker and Gilberto Mosqueda on the testing. Photo: DOUGLAS LEVERE 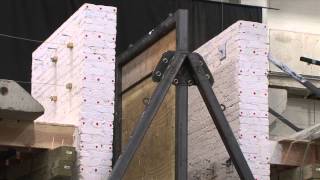 Watch a video of the earthquake simulation.

A brick wall imitating part of a New York City row house (often called a “brownstone”) suffered minor damage but remained intact during a simulation of the 2011 Virginia earthquake, according to a preliminary analysis of tests conducted Feb. 19 at UB.

“There’s very little information on the seismic behavior of unreinforced masonry construction in eastern North America and no validated numerical tools for structural engineers to use to analyze the brownstones,” says Whittaker, also professor and chair of UB’s Department of Civil, Structural and Environmental Engineering.

The lack of information is a problem because earthquakes, as evidenced by the Virginia quake and a 5.5 magnitude temblor that struck the New York City area in 1884, do occur, Whittaker notes.

To conduct the tests, researchers built two 14-foot walls using materials such as 100-year-old brick designed to imitate existing buildings. One wall was typical of New York City buildings, while the other—common on the West Coast—was reinforced with steel rods and bolts that positively connected the flooring to the wall.

Using data from the U.S. Geological Survey, researchers programmed an earthquake shake table to mimic ground accelerations observed during the 5.8 magnitude Virginia quake. Both walls moved but held together.

A second series of tests mimicking ground accelerations from a 6.3 magnitude quake in Christchurch, New Zealand, in 2011 produced a very different result. The parapet on the unreinforced wall collapsed, whereas the reinforced wall suffered some damage but remained standing.

“The data that we obtain from these tests is going to be used to develop and improve numerical models of these buildings to determine how vulnerable these buildings can be in earthquakes,” explains Gilberto Mosqueda, UB research professor and associate professor in structural engineering at the University of California, San Diego.

A more detailed analysis of the results will be published in an MCEER report later this year and in peer-reviewed journals. MCEER is planning additional tests of unreinforced masonry buildings.

As described in the paper at the link below, the addition of a small proportion of short carbon fibers to cement mortar enhances the brick-to-mortar bond strength by up to 150 percent. This effect of the fiber addition relates to the decrease of the drying shrinkage of the mortar. The paper was published in 1997 in Cement and Concrete Research.  The authors of the paper are Deborah D.L. Chung and her PhD student Mingguang Zhu.