A Recipe for Lava 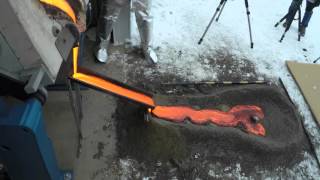 A 2016 "lava pour" by scientists in the University at Buffalo's Center for Geohazards Studies.

Lava: Not only is it destructive, it’s also unpredictable—a bad combination. Take, for example, when it comes into contact with water. Sometimes it cools; other times, it explodes.

Lava-water interactions, common in nature but poorly understood, are the focus of experiments at UB’s Center for Geohazards Studies at its field station in Ashford, N.Y. There, scientists donning spacesuit-like getups that protect against the extreme heat and infrared radiation are cooking up their own vats of molten rock on an unprecedented scale.

How, exactly? Here’s a recipe.

The main ingredient—the only one, really—is volcanic rock called basalt. UB geologists shipped in two tons of it from a Texas quarry.

The rock is dumped into a magnetic induction furnace that heats the mixture to about 2,500 degrees Fahrenheit. The contents are stirred every half hour.

After about three hours, the lava is ready. Each lava-water experiment uses a batch of roughly 10 gallons.

The research, funded by the National Science Foundation, could allow for better assessment of the danger posed by volcanoes that are covered in ice or located near lakes and oceans.