From one college offer to the NFL’s No. 5 pick

Share This Print
The Oakland Raiders took Mack fifth overall—the highest a UB player has ever been drafted—in the 2014 NFL Draft.

Two months before the NFL draft, in early March, spring break is in full bloom in Khalil Mack’s home state of Florida. That’s where many NFL hopefuls have chosen to train, but Mack is chilling up here in Buffalo, enduring a March blizzard so he can thaw out his weaknesses.

Mack’s formidable strengths made him the most devastating defender in UB’s football history. Two months from now, he’ll become the highest-drafted Bull ever, well surpassing Gerry Philbin’s selection in the third round in 1964 by the New York Jets.

Of course he doesn’t know that yet. But speculation is running rampant. As Mack is working up a sweat in the coldest building around—the Northtown Center, where another former UB football player, John Opfer (BA ’99), operates Proformance Sports Training in a turfed corridor above two ice rinks—ESPN analyst Mel Kiper is generating even more heat around Mack’s name by projecting him as the No. 1 overall pick in his most recent mock draft.

Mack doesn’t see Kiper’s mock draft until after his workout, and barely raises an eyebrow when he receives the news.

“I don’t try to notice that, you know what I mean?” Mack says. “I try to keep that on the back burner. I’m still working hard, and that’s what it’s about with me. I don’t focus on the attention.”

With the humility and hunger of a last-round prospect, Mack works diligently on strengthening his core and hip musculature, ensuring the NFL team that invests a first-round pick in Mack gets a better athlete than the one they scouted.

At the NFL Scouting Combine in February, Mack ran the 40-yard dash in a disappointing 4.68 seconds. He immediately dumped his noted speed coach and called Opfer, whom he’d worked with before. “I knew he was what I needed,” Mack says. After just four days with Opfer, Mack shaved more than one-tenth off his time at UB’s annual Pro Day at the Buffalo Bills Fieldhouse; one scout timed him at 4.45 seconds. And just like that, Mack’s draft stock rose even higher.

It’s hard to imagine now, but Mack received scant recruiting attention while playing for Westwood High in Fort Pierce, Fla. He was originally focused on basketball, and a junior-year knee injury limited his opportunities in both sports. UB was the only Division I-A program to offer him a scholarship.

Playing on the scout team as a redshirt freshman in 2009, Mack terrorized his teammates in practice, and gained inspiration later that spring when the Green Bay Packers drafted UB’s James Starks in the sixth round, while Naaman Roosevelt (Buffalo Bills) and Davonte Shannon (Washington Redskins) received post-draft contracts. The next year, the Dallas Cowboys drafted UB’s Josh Thomas in the fifth round.

“Those guys solidified what it took to get to the NFL for me,” Mack says. “Seeing how hard they worked made me want to work even harder.”

Last fall, Mack became the NCAA Football Bowl Subdivision’s all-time leader in tackles for loss (75) and forced fumbles (16). He was named Mid- American Conference Defensive Player of the Year, received the Jack Lambert Trophy as the nation’s top linebacker and helped the Bulls qualify for a bowl game for just the third time in school history. 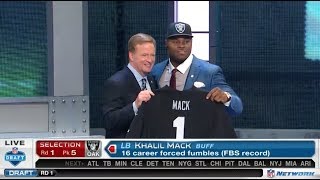