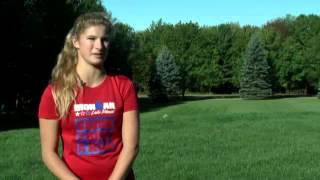 In this interview with the CBS affiliate in Albany, N.Y., UB student Julia Slyer talks about competing in Ironman triathlons.

“It’s almost like an addiction. Once you cross the finish line, it’s the ultimate runner’s high.”
Julia Slyer

Julia Slyer wasn’t your typical toddler. At age 3, when most kids are thinking about their next nap, she dreamed of doing an Ironman triathlon.

“I’ve always been drawn to nerd stuff. Even when I was a little kid I wanted to be the one that ran the farthest or biked the farthest,” says Slyer, a rising junior who transferred to UB from the University of Rochester after her freshman year. “When I was 8, I convinced my dad to do the [American Diabetes Association] Tour de Cure 50-mile bike ride with me.”

In fact, Slyer’s love of Ironman comes from her father, John, who has competed in more than a dozen of them. She competed in her first, in July 2014 at Lake Placid, N.Y., at age 18—the minimum age to participate. She got a decorative tattoo of the Ironman logo to mark the moment [see photo below].

Last summer, Slyer competed in Lake Placid again and won her age group (18- to 24-year-old women), which qualified her for the Ironman World Championship in Kona, Hawaii, last October. The youngest competitor in the race, she finished in 11 hours, 17 minutes and 44 seconds, placing fourth in her division. Her goal is to again win her age group in Lake Placid this summer, which will be her fourth Ironman, so she can return to Kona Oct. 8.

A grueling competition, Ironman consists of a 2.4-mile open-water swim, followed immediately by a 112-mile bicycle ride, then a full 26.2-mile marathon. Competitors burn anywhere from 8,000 to 12,000 calories per race.

“I like to push myself and see how far I can go and how fast I can do it,” Slyer says when asked why she would put herself through such torture. “It’s almost like an addiction. Once you cross the finish line, it’s the ultimate runner’s high.” The high can be short-lived, though. “Fifteen minutes later, you feel like you got hit by a truck. Three hours later, you feel like it’s still running you over.”

Slyer got this tattoo on her torso after her first Ironman.

Her training regimen is intense, to say the least. She has a stationary bike set up in her dorm room so she can ride several hours a day. She swims three times a week with the UB Swim Club, and she runs on a treadmill. When the weather turns warm, everything shifts outside and her runs increase from eight miles to 20.

For Lake Placid this summer, she’s focused on improving her time on the bike, her weakest event. “The last 20 to 30 miles of the bike is the hardest for me,” she says. “The swim is just over an hour. The run you’re like, ‘This is the last thing I have to do; it’s just a marathon.’ But that last hour on the bike, you’re aching and you just want to get off of it.”

To make things even more challenging, Ironman forbids the use of headphones, iPods and mobile phones. “I try to get songs stuck in my head,” Slyer says. “I’ll sing one line of the chorus over and over. I’ve ruined three songs that way.”

And lest you think Slyer is taking time away from her studies to train, note that she’s a triple major: pre-med, biology and psychology. “School comes first,” she claims. “Then training. And then social life—if there’s any time left.”