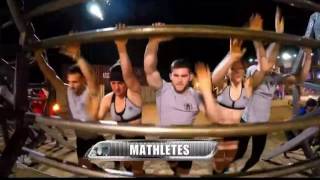 The Mathletes—a team composed of UB students—competed in the NBC reality show “Spartan: Ultimate Team Challenge” over the summer.

They’re called the Mathletes, four studious yet remarkably fit UB undergrads, and they dragged the school’s name through the muck and mire—nearly all the way to victory on national TV.

The students clawed their way to the finale of “Spartan: Ultimate Team Challenge,” a summertime NBC reality series that pits teams from various walks of life against one another on a monstrously difficult obstacle course. The Mathletes—the youngest and arguably smartest among the 24 teams that competed this season—made it to the show’s semifinals during their improbable run through mud trenches, across tire swings and over 20-foot slip walls.

“We were the nerds,” says Zoe Herrick, a senior majoring in math and biomedical engineering. “People saw us as the underdogs, and we showed them what nerds can do.”

Herrick’s teammates were Trevor Bernard, a junior math major; Chris Komin, who graduated in June with degrees in math and film study; and Ellen Lutnick, a senior who switched her major from math to exercise science. Each team was led by an elite Spartan athlete provided by the show; the Mathletes’ captain was Kyle “Wooch” Graff, who has a penchant for stripping down to his thong in the heat of competition.

It was Bernard’s idea to try out for the show after the four students became friends through UB’s Outdoor Adventure Club and various area rock-climbing gyms. So in addition to carrying heavy course loads, doing research at UB labs and working off-campus jobs, they trained like crazy— and it paid off: NBC accepted their audition video and flew them to Atlanta in April for four nights of filming.

“During the casting process the whole cast and crew named us the Mathletes, and we just rolled with it,” Bernard says. “So we’re these college students, walking around the hotel wearing shirts that say ‘Mathletes.’ And all these former Olympians, MMA fighters and people that do this sport for a living are like, ‘Are you guys here for a huge math competition or something?’ And we’re like, ‘No, we’re going against you guys.’”

Getting a leg up during the competition. Photo courtesy of NBC

The Mathletes won their first race easily; they raced again a few hours later and qualified for the semifinals with a second-place finish. Now down to the final six, they competed again the following night and just missed qualifying for the championship race. But along the way, they won the respect of their peers. “People came up to us after all the races and said, ‘We were taking bets on who’d be the first team to get eliminated—everyone thought it was going to be you guys,’” recalls Lutnick.

They also won fans across the country. Komin, the subject of a vignette about growing up in a Polish-speaking family on Grand Island, was swamped with new Instagram followers and Facebook friend requests. “I’ve gotten messages from people that say I’m inspiring to them,” he says. “For 21 years I’ve just been a kid growing up, and now all of a sudden people are looking up to me.” The team’s family and fans at the racecourse wore T-shirts that read “There is no √-1 in team” (√-1 equals “i”).

The Mathletes did UB’s math program proud. Viewers saw them wielding calculators and Rubik’s Cubes in Capen Hall. The play-by-play announcers praised their analytical skills in attacking the obstacles. Lutnick herself waxed lyrical during an in-race vignette: “Math is poetry for the physical world,” she said.

“I have such a mix of feelings—elation that it happened, sadness that it’s over,” says Komin, reflecting on the Mathletes’ transformation from regular UB students to unlikely celebrities. “But I’d have to say the predominant emotions are pride in what inexperienced racers did against professional athletes, disappointment that we didn’t go all the way, and a keen determination to come back and dominate in next season’s show.”