Jonathan Jones heaves his way to a national championship

Share This Print
“For our program and for our university, this is monumental. ”
Vicki Mitchell, director and head coach
UB track and field 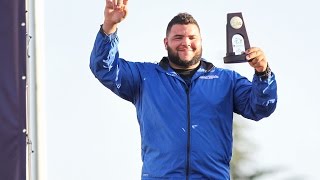 Check out the results from the NCAA Outdoor Track and Field Championship in men’s shot put and you’ll see some powerhouse programs near the top: Penn State, Florida, Texas, Georgia, Ohio State. Above all of them, however, you’ll find a new king of the mountain: Buffalo.

Jonathan Jones made UB history on June 10 when he won the 2015 NCAA shot put title with a throw of 68 feet, 2 inches—breaking his own school and MAC records, and becoming the first national champion in UB’s Division I era.

“It still really hasn’t hit me that I’m a national champion,” Jones said days after returning to Buffalo from Eugene, Ore., where the meet was held. “The more I say it, the more it hits home.”

“For our program and for our university, this is monumental,” says Vicki Mitchell, director and head coach of UB’s track and field programs. “Recruiting’s never easy but it’s going to be fun to say, ‘You can come to a school where we’ve had a national champion.’ That’s not something a lot of schools can say.”

The national title qualified Jones for the USA Track & Field Outdoor Championships, the same meet in which he placed fourth—the highest ever for a UB athlete—last summer. Jones took fifth at this year’s USATF meet, despite recording another career best throw of 68 feet, 7.85 inches. Although he just missed the cut to make the U.S. team for the IAAF World Championships in Beijing in August—the top four finishers qualified—he was the first alternate. And he earned a spot on Team USA for July’s Pan American Games in Toronto.

At the NCAA meet, Jones edged Penn State’s Darrell Hill. Hill also threw 68-2, but Jones won on the tiebreaker since his first throw was better than Hill’s second-best attempt.

A six-time All-American, Jones placed third at the NCAA Indoor Championships in March and swept the United States Track and Field and Cross Country Coaches Association Northeast Region Field Athlete of the Year honors, winning the award in both the indoor and outdoor seasons.

With his collegiate career complete, Jones will look to obtain sponsorships as he begins competing professionally. First, though, he plans to rehabilitate his right knee, which started bothering him late in the season. Once he regains his full lower body strength, “his distance is going to be unreal,” says Jim Garnham, UB’s veteran throws coach. “He is by far the best athlete I’ve ever coached.”