Although UB English professor Carine Mardorossian's only writing experience was for academic publications, she was determined to help hospice physician Christopher Kerr document the end-of-life experiences of his patients. Photo: Douglas Levere

Share This Print
“I honestly felt like I was having an out-of-body experience, as I caught myself insisting: I had never written a book for the mainstream, yet I was so determined to write this one. ”
Carine Mardorossian, professor
Department of English

Preview of "Death is but a Dream" 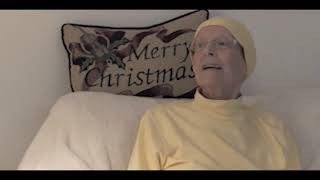 "Death is but a Dream" will air on April 15 on WORLD Channel.

On April 15, the WORLD Channel, carried by public television stations across the U.S., will air “Death Is But A Dream,” a documentary based on a book co-authored by local hospice doctor Christopher Kerr and UB English professor Carine Mardorossian.

The book, “Death Is But a Dream: Finding Hope and Meaning at Life’s End,” is the brainchild of Kerr, who over the course of his career noticed a pattern in patients who were near life’s end. He observed that in end-of-life stages, many people began to have dreams and visions of deceased loved ones visiting them at bedside. The dreams and visions often became more frequent as death drew near.

After researching and collecting data for more than a decade, Kerr wanted to write a book that archived and told the experiences his patients were having.

The lengthy process of getting the book to where it is now, being published in 10 different languages and sold in 10 different countries, was rough at first. The timeline of how Kerr and Mardorossian came together in writing the book was “quite interesting,” says Kerr, chief medical officer and CEO for Hospice & Palliative Care Buffalo.

When Kerr and his literary agent began the process, they originally sought out a different author to assist in putting Kerr’s research into meaningful words. The partnership quickly collapsed because Kerr believed that to write about the subject, you would have to witness the patients’ experiences in person, which at that time, the prospective writer was unable to do.

Mardorossian, on the other hand, had been friends with Kerr for over a decade, as she stabled her horse at Kerr’s barn. In passing, Kerr explained to her that he had given up on the book because finding a writer who saw eye to eye with him was hard to accomplish.

Mardorossian, professor of English and of global gender and sexuality studies in the College of Arts and Sciences, offered her services. But as an academic writer, her style of writing was not what Kerr was looking for — initially.

“I continually said to Kerr, ‘Let me write it,’” says Mardorossian. “I’m not that type of person, I’m really not. I honestly felt like I was having an out-of-body experience, as I caught myself insisting: I had never written a book for the mainstream, yet I was so determined to write this one.”

Kerr ultimately decided Mardorossian was the right fit, and he again pursued the book. The process of writing soon began and took the duo a year and a half to complete. Kerr says Mardorossian “helped me find a much deeper meaning.”

“I talked to Christopher every single day and we met up to five times a week and we would work,” says Mardorossian. “It was a constant back and forth.”

Kerr added: “We took over coffee shops that they should have expelled us from. We could have opened and closed some of them.”

The partnership flourished. The book got picked up by Random Penguin House after what Mardorossian said was “a longer-than-usual bidding war” between seven companies.

Looking back, Kerr said there was never an argument or tension throughout the whole process, as their egos were left behind. Kerr admires Mardorossian’s work ethic and determination, and calls the experience of working with her “the most enjoyable process.”

Mardorossian discusses the importance of Kerr’s work in “As death approaches, our dreams offer comfort, reconciliation,” an article published in The Conversation.

“As hospitals and nursing homes continue to remain closed to visitors because of the coronavirus pandemic, it may help to know that the dying rarely speak of being alone. They speak of being loved and put back together,” Mardorossian writes. “There is no substitute for being able to hold our loved ones in their last moments, but there may be solace in knowing that they were being held.”

Mardorossian and Kerr are now writing another book that will be a “natural extension” from their first one, she says. The new project will be from the caregiver’s perspective.

Kerr and Mardorossian want to shed light on these caregivers’ experiences because they believe the grieving process is an important part of someone’s end-of-life experience.

“Family members have to become nurses, whether they know anything about nursing or not,” says Mardorossian. “The testimonies Kerr has collected from these caregivers all say how it’s the hardest thing they’ve ever done, but also the best thing as well.”