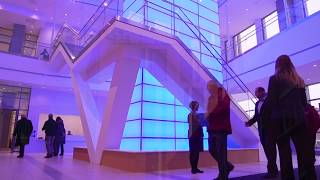 Grand opening ceremony of the Jacobs School of Medicine and Biomedical Sciences.

“This building fully integrates medical education into Buffalo’s growing academic health center, emphasizing interdisciplinary collaboration and strengthening our relationships with our clinical partners. ”
Michael Cain, vice president for health sciences and dean of the Jacobs School of Medicine and Biomedical Sciences at UB

Sixty-four years after moving to the South Campus, the Jacobs School of Medicine and Biomedical Sciences has returned to downtown Buffalo.

The building was the first to receive NYSUNY 2020 Challenge Grant funding through NYSUNY 2020, legislation that was signed into law by Gov. Andrew M. Cuomo in 2011. The initiative has spurred economic growth across the state and strengthened the academic programs of New York’s public universities and colleges. The mission of the NYSUNY 2020 program is to elevate SUNY as a catalyst for regional economic development and affordable education.

“Western New York’s transformation into a national health sciences hub continues to grow as the new Jacobs School of Medicine and Biomedical Sciences building opens its doors to the future leaders of 21st century medicine, research and technology,” Cuomo said. “By moving this state-of-the-art facility downtown, we strengthen Buffalo’s economy while helping to ensure the city’s growth and development continues strong.”

Lt. Gov. Kathy Hochul, who spoke at today’s grand opening ceremony, noted that with the completion of the new building for the Jacobs School on the Buffalo Niagara Medical Campus, “we realize a vision of bringing the University at Buffalo downtown and creating a world class hub for life science, technological innovation, and learning. It also stands as a testament to Gov. Cuomo’s historic investments and unwavering commitment to rebuilding the Western New York economy over the past six years.”

President Satish K. Tripathi said that moving the Jacobs School downtown “is a major milestone for the University at Buffalo that has been a decade in the making.”

“UB is now poised to achieve our vision of excellence in medical education, research and patient care. We are so indebted to Gov. Cuomo, who shared and supported our vision all along,” Tripathi said. “From the very beginning, he, along with the Western New York state delegation, saw the great potential in moving the Jacobs School to the Buffalo Niagara Medical Campus and recognized the pivotal role it could play in the remarkable transformation of our region. Gov. Cuomo advanced our vision by signing the historic New York SUNY 2020 legislation into law.

“This defining and transformative moment would also not have been possible without the incredible support and generosity of Jeremy Jacobs and his family, for whom the Jacobs School of Medicine and Biomedical Sciences is named,” he added.

Blue and white are the colors of the day. Photo: Meredith Forrest Kulwicki

To facilitate collaboration and interactions, learning landscapes equipped with whiteboards, chairs and tables are located throughout the building. Photo: Meredith Forrest Kulwicki

Attendees check out one of the casual lounge areas between the first and second floors. Photo: Meredith Forrest Kulwicki

Awe-inspiring inside and out: In silhouette, attendees admire the dramatic views of downtown Buffalo. Photo: Douglas Levere

An effusive crowd of roughly 1,000 gathered to celebrate the official grand opening of the new home of the Jacobs School of Medicine and Biomedical Sciences at 955 Main St.

“Mr. Jacobs and his family are committed to our vision because they know that the students we educate here, and the discoveries and treatments generated here, will save lives and improve the quality of life for people around the world. Their belief in our institution has transformed the dream of a world-class downtown medical school building into a concrete reality.”

“The new medical school building fulfills the collaborative and innovative vision of the medical campus, which will have a transformative impact on health care in Western New York. By moving the school downtown, UB is enhancing its role in the fabric of our city and furthering its commitment to our community.”

Buffalo Mayor Byron W. Brown noted the Jacobs School will bring more than 2,000 students, faculty and staff to the heart of downtown Buffalo. “This is an incredibly exciting time for the medical community in the city of Buffalo,” Brown said. “I would like to thank President Satish Tripathi for his tremendous leadership in making this project a reality; Jeremy Jacobs and his family for their generosity — not just to UB but to the entire city of Buffalo — and Gov. Andrew Cuomo for his vision and determination to put Buffalo on the map as a leader in medical education, care and research.”

Michael Cain, vice president for health sciences and dean of the Jacobs School, said today’s opening “marks a long-awaited reunion for the Jacobs School of Medicine and Biomedical Sciences.”

“It reunites our faculty conducting research, who have been located on the university’s South Campus, with those involved in patient care in our partner institutions,” Cain said. “This building fully integrates medical education into Buffalo’s growing academic health center, emphasizing interdisciplinary collaboration and strengthening our relationships with our clinical partners.

“A medical school that is just steps away from UBMD Physicians’ Group at Conventus, John R. Oishei Children’s Hospital, Buffalo General Medical Center, Roswell Park Cancer Institute and all of our other partners will foster synergies that will expand and improve health care in Western New York,” he said.

The new building allows the Jacobs School to expand its class size by 25 percent, from 144 to 180 students, training many more doctors to address local and national physician shortages. This year, the Jacobs School admitted its first class of 180 students; by 2021, the school’s enrollment will reach 720 students.

That expansion, in turn, boosts UB’s ability to recruit and retain world-class faculty with medical expertise in specialties that the region sorely lacks so that Western New Yorkers do not have to leave town for specialty care.

The move of the Jacobs School to the Buffalo Niagara Medical Campus bolsters the city’s biomedical sector as a catalyst for regional economic development. Medical innovations will result from increased synergies with the clinical and research partners on the medical campus, in turn, creating new medical technologies and spinoff businesses.

Deliberately positioned as a “gateway” to the medical campus, the building features a pedestrian walkway from Allen Street and the vibrant Allentown neighborhood to Washington Street.

The building’s sustainable features include bicycles available to rent in the walkway and the NFTA Metro station, which is located under the building — a first for Buffalo — so that the public can readily access the medical campus from the Allen/Medical Campus station.

A 32-foot tall, two-story light tower at the entrance at Main and High streets functions as the building’s signature feature: a beacon, often lit in UB blue but that can beam virtually any color, that architects intended as emblematic of the school’s return to its downtown roots. Just upstairs on the second floor, in a more concrete nod to the historic past of the Jacobs School, hangs a pair of lanterns. Originally gaslights, they illuminated the High Street medical school lobby from 1893 until 1953, when the medical school moved to the South Campus on Main Street. The lanterns were restored by Ewa Stachowiak, assistant professor in the Department of Pathology and Anatomical Sciences, and Brian Koyn of the UB health sciences fabrication department, who used a 3-D printer to restore missing and decaying lantern pieces with exact replicas of the original metalwork.

The building design was produced by HOK, a global design, architecture, engineering and planning firm that was selected for the project by UB in 2012 after winning an international competition to develop the best design concepts for the new Jacobs School building.

A key educational attribute of the building is its emphasis on active learning classrooms, which contain triangular tables that are fully electronic so that any student, even in a class of 180, can not only contribute but also present data to the entire group with the touch of a button.

Small classroom and study spaces are available throughout the building, all with optimal technology connections.

A casual café is located on the second floor, but for full-service dining options, faculty, staff and students will be encouraged to patronize local businesses, a deliberate feature of the building.

State-of-the-art laboratory spaces on the building’s third, fourth and fifth floors are modern and light-filled.

Students, medical residents and professionals also will have access to the building’s surgical suites and robotics suites, where they will be trained in the newest surgical and robotics skills. In addition to the traditional gross anatomy training using cadavers, students will have access to visualizations of the cadavers, providing far more detailed anatomical information.

In addition to the support provided by Cuomo, the new building was made possible through state and UB capital appropriations and support from the UB Foundation, as well as the generosity of alumni, community leaders, corporations and foundations who gave to a $200 million campaign for the Jacobs School, including a historic $30 million gift from Jacobs and family.

In recognition of the Jacobs family gift and Jacobs’ tremendous service and philanthropy to the university, the medical school in 2015 was named in their honor.