Share This Print
“Our research also showed us that “Buffalo” has a very strong place in the hearts and spirit of the UB community. ”
Allen Greene, director
UB Athletics 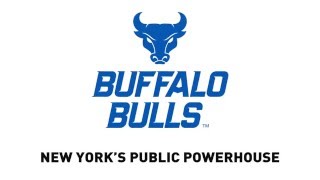 UB Athletics has a new set of logos that are more closely aligned with the university’s strengthened and cohesive academic identity.

UB unveiled a new set of athletics logos on Tuesday. While the traditional interlocking UB logo will serve as the primary mark, a new wordmark and spirit mark also were introduced.

The new logos are part of a university-wide branding initiative. The new look for athletics is now more closely aligned with the university’s strengthened and cohesive academic identity.

The new spirit mark is the first update to the bull since 2006. The sleek, classic bull head evokes a sense of energy, pride and action. Its iconic nature serves to represent the top-notch, competitive nature of UB Athletics.

Additionally, a bold new “Buffalo Bulls” wordmark with a modernized font was introduced. While “Buffalo” will replace the “State University of New York Buffalo” wordmark previously featured on uniforms and apparel, New York State will remain an important part of UB Athletics’ identity.

“As the largest and most comprehensive public university in the State University of New York system, it is important that “New York” is still a part of our identity and reflects our athletic and academic strength, which is shown through our new tagline, ‘New York’s Public Powerhouse,’ said athletics director Allen Green. “Our research also showed us that “Buffalo” has a very strong place in the hearts and spirit of the UB community.

“The intent for branding with emphasis on New York was to stimulate discussion about UB’s stature in New York, build momentum and tell UB Athletics’ story in a thought-provoking way, and that effort was a tremendous success,” Greene said. “Now that we are unified with every school and department at UB, we have more strength than ever before.”

The uniforms, court and field will reflect the new branding and will be rolled out in the near future.

“This is a phased approach and will be executed as cost effectively as possible,” Greene said. “We’re still identifying a timeline, but we know the new branding will be implemented starting this summer.”

This is fantastic. I am a 1973 grad and Buffalo-born and raised but had to move 25 years ago. Seeing New York as the school name on the jerseys of the football and basketball teams had me wondering what school they were from. Now I hope they will show everybody that they are from BUFFALO.

This is very disappointing. I have enjoyed seeing my alma mater take on the roll of SUNY's flagship sports program. It's something New York has been missing while being surrounded by major state programs such as Ohio State, Penn State. and UConn. We have wasted a great opportunity to represent New York State.

The transition from the University of Buffalo to the state university started while I was at school. Since I now live on the West Coast, I seldom get to see any of the UB sports, although I did see basketball recently and football in the past. It always aggravated me to see the State....... in large letters and Buffalo in small letters. It sounds like you have corrected that. The school will always be Buffalo to me! Good plan!