Juan Aleman, a PhD candidate in the Department of Civil, Structural and Environmental Engineering, says that while New York City is not located in a high seismic zone, it is at risk during an earthquake because of its existing infrastructure and large population. Photo: DOUGLAS LEVERE 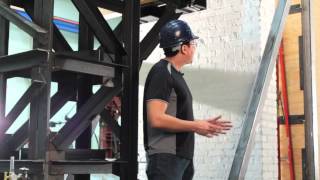 PhD candidate Juan Aleman previews a test that will show how New York City's row houses might weather a earthquake similar to the 2011 tremblor in Virginia.

Researchers will conduct a rare, if not unprecedented, large-scale earthquake simulation next week to determine how vulnerable panel walls within New York’s City's unreinforced masonry buildings (row houses) are to temblors.

Designed to imitate the 2011 Virginia quake that rattled the East Coast, the test will occur Feb. 19 at the UB’s Multidisciplinary Center for Earthquake Engineering Research (MCEER).

Researchers will use an earthquake shake table within UB’s earthquake simulation lab in Keter Hall to mimic the Virginia temblor. They will use the test results to validate numerical models that will be used for seismic vulnerability assessments, such as for property loss and human casualties.

Researchers expect the walls to fall apart and crumble to the ground.

While not common, earthquakes periodically hit the New York City region, including a 5.5 magnitude temblor in 1884, according to the U.S. Geological Survey.

“New York City is not a high seismic zone, but the risk there is significant because of the existing infrastructure and large population,” says Juan Aleman, a PhD candidate and Fulbright scholar in the School of Engineering and Applied Sciences. “With this test, we hope to learn how buildings will react to a quake similar to the one that struck Virginia in 2011.”

Aleman is working with Andrew Whittaker, MCEER director and professor and chair of the Department of Civil, Structural and Environmental Engineering, and Gilberto Mosqueda, a former UB researcher, who works as an associate professor in structural engineering at the University of California, San Diego.

The test is a collaboration between UB and the International Masonry Institute.