A city rises inside a home

Dennis Maher has spent the past three years refurbishing his house on Fargo Street on Buffalo’s West Side. 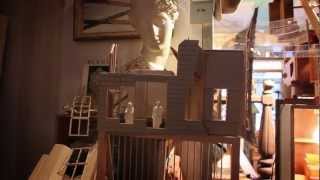 If it were possible to capture the soul of a city inside a single home, it might look something like the house that UB faculty member Dennis Maher has spent the past three years refurbishing on Buffalo’s West Side.

In the dining room, a city is rising. A panoply of dollhouses climbs up one wall, sheltering curios like model churches, miniature barns, vintage train sets and shovel-wielding construction worker figurines.

Upstairs, more imaginary landscapes are taking shape. Greek columns, staircases and railings—all miniature—crawl across bookshelves in a library. A few rooms down, pipes from a wooden organ fall from the ceiling and rise from the floor, recalling stalagmites and stalactites in the natural world.

Maher, clinical assistant professor of architecture in the School of Architecture and Planning, scours flea markets, thrift stores, estate sales and demolition sites for discarded treasures. He then combines these items to create new worlds inside his Fargo Avenue home.

In doing so, he has transformed this once-dilapidated structure into a center for the urban imagination—a house that mirrors the idea of a city and inspires other artists to embark on urban-themed endeavors.

“Many of the objects that I collect are house-like: bird cages, jewelry boxes, dollhouses, things that seem to suggest shelter or enclosure. They get absorbed into the walls and start creating fictitious cityscapes, unknown structures that inspire the imagination,” Maher says. “I love the idea of a secret box that promulgates other openings, that acts as a catalyst for creativity.”

In one project, Maher has invited eight tradespeople, ranging from a plumber to a roofer, to tour his home and use the visit as an inspiration to build a structure of their own imagination using the day-to-day materials of their craft.

Maher is incorporating these models into “House of Collective Repair,” an installation that opened last weekend at the Albright-Knox Art Gallery, where Maher is the 2012 artist-in-residence. The installation is on view through May 12.

Two opposing but complementary themes run through Maher’s work on his home, which he has titled “The Fargo House”:

Accumulation: This is the ongoing process by which Maher gathers and adds objects to the house. This endeavor marries the city with the interior of the home and confuses the boundaries between these normally distinct spaces. “I’m interested in thinking about the lives of objects, in the way that things move in a city,” Maher says. “It’s in the nature of objects to move around, and this house has become a collector and consolidator of the animate lives of matter.”

Excavation: Besides adding new objects, Maher has been working to uncover and preserve previously hidden facets of the home. Before painting the exterior of the house a deep blue, he carefully masked out sections of the old façade to save. In each blocked-out area, he scraped away old paint layers to reveal past colors ranging from beige to sea green. He used a similar technique on some interior walls and floors, exposing materials used in several generations of renovations.

Like the city around it, the Fargo House is constantly changing. And as the home evolves, Maher plans to continue engaging the community in creative projects connected to the residence.

Besides the tradespeople’s sculptures, his Albright-Knox exhibit includes the showing of a Fargo House documentary that students from the Buffalo Academy for Visual and Performing Arts created, he says.

In addition, Starlight Studio and Art Gallery, which supports adults with disabilities in their artistic development, recently undertook a project inspired by the Fargo House.

Starlight artists travelled from the Albright-Knox to Maher’s home, taking pictures of interesting buildings along the two-mile route.

Afterward, the photographed structures were drawn onto fabric and passed along to other studio members who used techniques including embroidery to embellish the work. The result of this collective layering was a unique portrait of the city titled “House of Collective Embroidery.”

The project is on display at the Albright-Knox and also will be shown in March as the inaugural exhibition in a gallery space Maher is establishing at the Fargo House.