Hayes Hall gets its due

After the ribbon-cutting ceremony, attendees file into Hayes Hall for tours of the renovated building. Photo: Douglas Levere

A student expresses her thoughts on the new look for Hayes. Photo: Douglas Levere 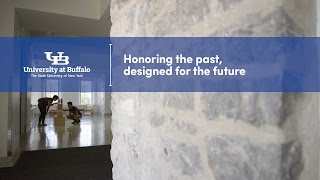 Members of the UB community talk about the significance of Hayes Hall.

Halfway through today’s grand reopening ceremony for Hayes Hall, Bob Shibley walked up to the podium, looked at the crowd, smiled and said, “God, this is fun.”

Fun it was as faculty, staff, students, alumni and members of the community gathered on the Hayes Hall lawn on the South Campus Friday morning to celebrate the official grand reopening of the iconic home of the university’s School of Architecture and Planning.

Hayes Hall underwent a $44 million renovation that began in 2010 and concluded earlier this year. It was named to the National Register of Historic Places over the summer.

The exterior was completely restored, while the interior was modernized and equipped with technological upgrades and collaborative spaces, all designed to inspire and support architecture and planning students of the 21st century.

“It is a spectacular facility, fully equipped to support our teaching, research and service in the place-making professions,” Shibley, the school’s dean, said in his opening remarks. “The quality of space and light, the embedding of technology in the learning environment, the efficiency of its systems — the search for knowledge will be better here because it’s a better place, and we want to be better because it’s a better place.”

President Satish K. Tripathi said the Hayes Hall renovation is another tangible result of the UB 2020 strategic plan, and even joked that he wished his office was located in the building. “As a leading 21st-century public research university, we have imagined our future, planned for it and, working together, we are building it,” Tripathi said. “While we have restored Hayes Hall to its grandeur, it is also now a 21st-century learning environment for our architecture and planning students and faculty that will enhance UB’s mission of excellence in teaching, research and service.”

What’s more, Tripathi said, Hayes Hall symbolizes the university’s connection to the community and UB’s mission of service. “By creating this reimagined space, we are providing more opportunities for our students and faculty to create scholarly research and output that has a profound and deeply meaningful impact on the many communities we serve,” he said.

The building was constructed in the 1870s as the Insane Asylum for the Erie County Almshouse. UB acquired it in 1909 and converted it into an academic building in the 1920s, and renovated it again in the 1950s. The School of Architecture and Planning has called it home since 1977.

Shibley connected the determination of the building’s original architect, George Metzger, to the enthusiasm put forth by the school’s students, and which drives its faculty and staff to be their best.

“The center building, before it had wings, was designed by an architect accepting his first commission in the late 1870s. He was 17 years old. Never tell a 17-, 18-, 19- or 20-year-old ‘You can’t do that.’ Every day our students refresh and remind us of why we’re here, what the world needs and how best to get it,” Shibley said.

“We know that our work is a reflection of ourselves, and we take that reality very seriously,” said Micaela Barker, a dual master’s student in architecture and urban planning, who also spoke during the ceremony. “My hope is that Hayes Hall will become the place where we all share our hard work with each other and everyone else outside of our school, giving our work a platform to speak back to us in a meaningful way.”

Friday’s grand reopening ceremony was just one of many activities planned to celebrate the building. Other events Friday include a symposium, exhibits of faculty and student work throughout the building, and a talk by 1972 architecture alumnus Michael Garz on his role as project manager for the World Trade Center Transportation Hub.

Saturday’s festivities will feature a special edition of Buffalo PechaKucha — a rapid-fire presentation format — and a community conversation about the school’s future role in the region.

NPR interviews Katarzyna Kordas, about a new UNICEF and Pure Earth report showing that about one in three children globally have been exposed to lead at levels shown to damage their health and cognitive development.

NBC News published an opinion article authored by Henry Louis Tayler about how the combination of Breonna Taylor’s death and racist police actions underlines the danger of gentrification.