Kelly Hayes McAlonie led the planning efforts for the new home of the Jacobs School of Medicine and Biomedical Sciences on the Buffalo Niagara Medical Campus. Here, she poses on a walkway overlooking the atrium of the new building. Photo: Douglas Levere

Share This Print
“During my years as an architecture student, I just always gravitated to projects related to either children or education. I have, in one form or the other, dedicated myself to educational architecture. ”
Kelly Hayes McAlonie, director
Campus Planning 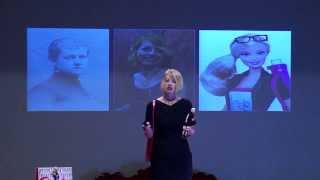 Named as the university’s associate director of Capital, Facilities and Space Planning in May 2010, her first job was to conduct a master plan for the new home of the Jacobs School of Medicine and Biomedical Sciences.

“From the days when I was a student of architecture, I have been interested in how educational design and architecture can be a vehicle for enhancing education,” says Hayes McAlonie, an architect and now director of UB’s newly renamed Campus Planning office.

“The Jacobs School building project has presented, from the outset, an unparalleled opportunity to really think about pedagogy and architecture in a whole new way.

“When I came to UB, the university’s Comprehensive Master Plan had just been published and the idea for the new school of medicine was well articulated,” she says. “The follow-up feasibility study to determine a location, how to go about executing the plan and the cost, among other things, was the next step.

“Going into it, what was exciting to me was the fact that Dr. Cain (Vice President for Health Sciences Michael E. Cain) had a clear vision as to how he wanted students taught. And the existing facility was not providing that.”

Hayes McAlonie adds that, from the earliest meetings, the project team talked about how medical students are educated, how the pedagogy is changing and how the new building needs to respond to that.

“It was exciting to learn about their case-study pedagogy and active learning, and creating a place where students will learn whether they are inside the classroom, the lab or outside of class,” she says.

The P-16 continuum and life learning

“During my years as an architecture student, I just always gravitated to projects related to either children or education,” she says. “I have, in one form or the other, dedicated myself to educational architecture.”

Before joining UB, Hayes McAlonie was a project leader for Cannon Design in the Grand Island firm’s educational sector.

During this period, she also co-founded and coordinated the Architecture + Education program with the American Institute of Architects Buffalo/WNY Chapter and the Buffalo Public Schools.

Now led by the Buffalo Architecture Foundation, the award-winning program is offered biennially.

“Around this time, I was thinking about the fact that K-12 and higher education are often thought of as separate sectors, but they are really part of a continuation of learning,” says Hayes McAlonie. “For me, the question then became, ‘Why aren’t they more connected?’

“During that period of my career, it happened that (former UB President) John Simpson wrote an article called ‘The P-16 Continuum,’ which I read in the Christian Science Monitor,” she recalls. “This was in 2006.

“His article was about lifelong learning, focusing on the importance of developing a seamless system of education, with aligned expectations, from pre-school and early learning — the “P” — through the first four years of college — the ‘16.’

“As a result of the article, Cannon set up a symposium — which I led. At that same time, UB2020 was in development,” Hayes McAlonie says, “which was something that I was following.

“I found the ideas very compelling. So much so that when I had an opportunity to apply for a position at UB a few years later, I did.”

“My first anniversary at UB, in May, 2011, coincided with the passage of SUNY2020 by the state legislature and the announcement that UB’s school of medicine was moving forward and moving downtown. It was, and remains, a career-defining project for me.”

“Despina Stratigakos (UB architecture professor) came up with the idea, and I eventually got involved … but I connected with it from the beginning,” says Hayes McAlonie. “In a lot of ways, for me, that was about architecture and education. Something like that would almost certainly have influenced me when I was growing up.”

Although Architect Barbie won Mattel’s 2002 competition for the next career in its “Barbie I Can Be ...” series, the company declined to produce the doll. It took nearly 10 years to get Mattel to finally buy into the concept of Architect Barbie.

“After Architect Barbie lost a second election to Computer Engineer Barbie, and following a campaign by Despina and myself, Mattel agreed to see the project through and asked us to join the design team,” she says.

Also in 2011, Hayes McAlonie co-curated the first exhibit in 25 years on Louise Bethune, America’s first professional woman architect, at the Buffalo History Museum. Having written widely on Bethune for more than 10 years, Hayes McAlonie is currently writing a biography of the pioneering architect.

“I was in a hospital by the end of the day, paralyzed from the neck down,” she recalled in “The Power Dress,” a 2013 TEDx Women Talk she delivered in Buffalo.

She told the audience: “I was diagnosed with Guillain-Barre Syndrome … a neurological autoimmune syndrome that breaks the connection between the brain, the spine and the muscles. My case was particularly severe, as I was on a ventilator for almost two months.

“It is a strange thing, to go from being a vibrant, energetic person in the prime of her life one day … to becoming an invalid on life support the next.”

Hayes McAlonie told the group her battle with Guillain-Barre proved to be particularly difficult. “I can tell you that I was filled with deep despair and I was desperate to get back to being the old Kelly … 2011 had been the most fulfilling year of my career, and I so much wanted to be that person again.”

Following a slow, incremental recovery, Hayes McAlonie was released from the hospital in March 2012.

“When I began to make occasional public appearances — especially the rare professional appearances — I wanted to appear strong and in control,” she recalls. “However, even with often being in a wheelchair and still needing a lot of basic assistance, I was determined to get back to being myself.”

“If you always do what interests you …”

She is responsible for implementation of the UB Comprehensive Plan and realizing the strategic goals of the institution.

Hayes McAlonie also leads the planning efforts of the university’s strategic and capital projects, including, in addition to the Jacobs School of Medicine and Biomedical Sciences building, the South Campus Revitalization Plan and the UB Academic Utilization Study.

Now fully recovered from Guillain-Barre Syndrome, she often speaks to groups and organizations about managing a disability in the workplace, noting: “At that point in my life, I was limited in certain choices because of my disability.”

She says she was able to pursue her professionalism with grace and dignity because of the lessons she learned from Louise Bethune and Architect Barbie.

“Mattel has a motto that accompanies Barbie: ‘If you can dream it you can be it.’ And I think that is true,” she says.

“I recently saw something on Facebook, where someone posted a quote from Katharine Hepburn: ‘If you always do what interests you, at least one person is pleased.’

“I wanted to be an architect from the time I was 12. I would have been one of those little girls who would have had the doll. And I never thought of doing anything else.”