Walter Hood, the designer of the Solar Strand. 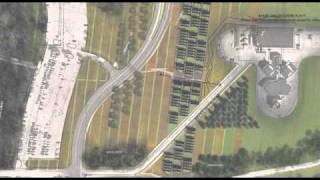 Hood, calls his concept "The Solar Strand," which refers to a linear landscape formation and to the way pairs of molecules entwine to form a DNA strand.

Founding principal of Hood Design and professor and former chair of the Landscape Architecture Department at the University of California-Berkeley, Walter Hood was selected through an international design competition.

The competition was designed to ensure that the solar installation would create a visually attractive gateway integrating beauty with engineering innovation and environmental sustainability.

A pioneering urbanist, Hood heads a firm committed to issues that address the reconstruction of urban landscapes within towns and cities.

His concept for the UB project demonstrates his affinity for exploring ways that landscape typologies reinforce and remake landscapes specific to place and the people who occupy them.

Hood received the Cooper-Hewitt National Design Award for Landscape Design in 2009, and in 2010 was bestowed the title “master of design” by Fast Company magazine.